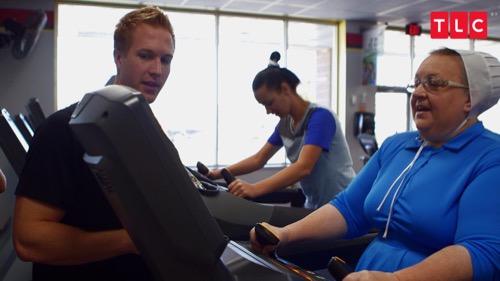 Tonight on TLC Return to Amish, the Breaking Amish spin-off airs with an all new Sunday, June 4, 2017,  season 4 episode 6 called “Amish Pair-o-Dice,” and we have your weekly Return to Amish recap below. On tonight’s Return to Amish episode as per the TLC synopsis, “Mary takes Jeremiah and Carmela to Las Vegas for the honeymoon they never had, but a fight between Abe and Jeremiah jeopardizes the trip.”

Tonight’s episode is going to be exciting you won’t want to miss it, so be sure to tune in for our live coverage of the show tonight at 8 PM – 10 PM EST! While you wait for our Return to Amish recap hit the comments and let us know how excited you are about the return of the Amish family.

Jeremiah and Carmela had tried therapy. However, they often fought in therapy and that usually ended with Carmela running out of there because she tends to do that in tense situations. So therapy in itself wasn’t exactly working out for them though neither Jeremiah and Carmela wanted to give up on it or their marriage so they decided to stay on in Punxy where their family was. They thought being around family was easier because they were on neutral territory and so that helped them relax as well as have some fun. Like celebrating the real Groundhog’s Day with Punxsutawney Phil.

Though Mary later had an idea. She thought that it would help everyone to relax if they could get away again and so she suggested giving Jeremiah and Carmela a honeymoon. Mary thought that they could all go to Las Vegas and get away from their problems for a while. So the honeymoon wasn’t going to be just any old honeymoon. It was going to be a family trip and Mary had invited everyone, but Rebecca had said right off the bat that she wasn’t going. She was still studying for her GED and hadn’t wanted to disrupt that for a trip to Vegas that she thought was more for Mary than it was for Jeremiah and Carmela.

Mary has been known to gamble and drink and Rebecca suspected that her mother-in-law might have a problem. But Mary wasn’t one to be deterred and she still wanted to go even if both Rebecca and Abe said they weren’t going. So Mary had gotten super excited and then she had gotten into an accident as she was loading the car for her trip because she had slipped on some ice. She had fallen quite badly on her knee and had broken it in several places yet Mary didn’t let that stop her. She had gotten some crunches and had wanted to go Vegas anyways so her son Abe decided to go with her in order to help her around.

So, in the end, Abe went to Las Vegas and he enjoyed himself. He had liked all the bright lights on the strip and being there with his mother didn’t mean he couldn’t enjoy himself because Mary was also cutting loose. She had once explained to her other son Andrew that she was going to do with what she wanted to do now that her father had passed away and she hadn’t been allowed to his funeral so there was no stopping Mary. She had held herself back for years because she had wanted to be around in case anything were to happen to her parents however the worst did happen and the community had continued to ostracize her despite staying Amish. And so stopped caring.

Mary didn’t bother with thinking about what the Amish community might think about her and she had told her husband Chester that she was going to Vegas so she thought she was fine. However, Abe and his family did worry about what Mary would do in Vegas and that was part of the reason why he followed her. He said that Mary’s actions reflected on Chester and he didn’t want his father to get shunned for Mary’s actions. And Mary didn’t want that either except she didn’t always think certain things through. Mary for instance had gotten her picture taken with the Chippendales and she had gotten handsy.

Mary had grabbed their booties and she had even gotten a kiss from them. Though she knew that if her husband were to find out about those things that he could kick her out of the house and that the Amish community would even support him. So Mary made sure not to take things too far, but she did let her guard down some and hadn’t always made the best choices so the guys were keeping an eye on her. Abe and Jeremiah knew what Mary were risking and so they tried to reel her in occasionally only the two ended up getting into an argument of their own about Rebecca of all people.

Jeremiah had brought up Rebecca because he thought Abe was having more fun without his wife there. But that had been offensive and Abe had lost it when Jeremiah said that. He said that Jeremiah had no right to judge his marriage seeing as he was sure his wife would be home when he got there. So that led to a big bust up between Abe and Jeremiah yet the two men did talk afterwards and they did try to mend fences. Abe had realized that he shouldn’t judge Carmela and Abe had also realized that he went too far with throwing Rebecca under the bus when he didn’t know how Rebecca and Abe’s marriage was.

Yet, Abe had said that he listens to his wife out of respect for her and that they didn’t distance themselves from others because they didn’t want to be around them. He explained that he and his wife sometimes needed to be alone to work on their marriage and enjoy what little time they had with just the two of them. So the guys were able to hug it out once they talked and they decided to put the past behind them however Rebecca had surprised them all when chose to go to Vegas. She had found out that Jeremiah and Carmela were renewing their vows for their first anniversary and had wanted to be there for them.

So Rebecca’s presence did change things because Jeremiah had felt like she was going to ruin everything. However, he had been wrong. Rebecca had surprised him and the others when they were having breakfast and she had cleared the air. She had asked Jeremiah why he had such a problem with her and he had explained that he thought she didn’t like him though as it turns out he had been wrong about that. Rebecca said she loved him and that he was family just sometimes she didn’t like him too much because he could be an ass. And so Rebecca had realized that most of what Jeremiah’s problems were coming from a place of pain and that was something she understood.

Rebecca said that Amish couldn’t always express their emotions and that it easier for them to be angry because that at least had been allowed for them. Though the person that honestly didn’t figure that out until she came to Vegas was Carmela. Carmela knew that the vow renewal wouldn’t miraculously fix her marriage and so there was still some work to be had, but finding out that Jeremiah uses anger to hide his pain because that was the only way he could express himself back home in the Amish community had helped Carmela understand her husband a little better. So she and Jeremiah had come up with a fun idea for their vow renewal.

There had been some issues the last time they got married and so Carmela had wanted their Vegas wedding to be fun and light-hearted. But she and Jeremiah had kept the fact they were going to be wearing costumes to the wedding to themselves and they had left it as a surprise for everyone. And everyone included Sabrina. Sabrina had also unexpectedly arrived in Vegas to be there for the vow renewal and she thought that she was going to have a problem with Rebecca and Jeremiah there. So it had almost shocked her as well as everyone else when Sabrina and Rebecca made up. The two had talked about what happened and Rebecca had apologized once she saw that she wasn’t angry.

Rebecca had simply reacted the same way that Jeremiah when she was hurt. So she acknowledged that and had validated Sabrina’s feelings which was all that Sabrina had wanted however things didn’t truly seem like the old times again until they all went to the beauty salon to prepare for the vow renewal. There they had been goofy and Sabrina had asked her strange if not funny questions just like she used to. Yet, Mary didn’t become offended. She had laughed off the Brazilian wax explanation and had completely forgotten everything else. Like Rebecca being concerned about her gambling and her husband Chester calling her at the hotel.

Chester it seems had gotten upset and his message for Mary had asked her to get in touch with him as soon as possible. However, Mary decided that she wasn’t going to worry about until she got home and so she went ahead with probably the funniest weddings she’s ever been to. So a long and somewhat tense season ended with everyone in a good places with each other. And later, sure, Jeremiah and Carmela separated though they still wanted to work through their problems and they weren’t giving up. Chester on the other hand was being threatened with banishment after people in the church found out about Mary’s trip except he didn’t appear to blame his wife for that.

She had told him she was going to Vegas and so she simply left out what she was going to do in Vegas. Plus, neither Rebecca or Abe for that matter were going to rat her out. So they were fine for now and Abe and Rebecca’s marriage had even improved since then seeing as Abe gave up his job to take care of the family while Rebecca continues with school. But Sabrina had violated her probation and so it remains a struggle for her to regain custody.