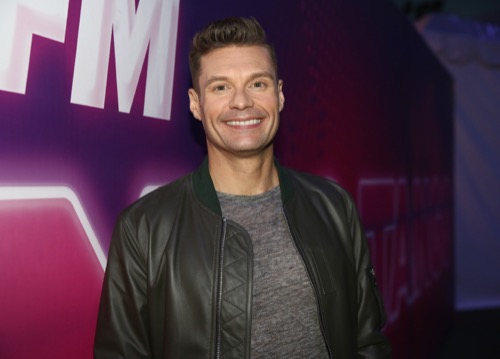 Ryan Seacrest was put in an extremely awkward position when he was forced by Kelly Ripa to talk about the weekend wedding of Julianne Hough to NHL player Brooks Laich.

Of course, Ryan Seacrest dated the Dancing with the Stars pro Julianne Hough for 3 years, from 2010-2013 and there were rumors that Ryan was so in love that he planned to pop the question.  Instead, it was reported that Ryan was left heartbroken when Julianne ended their relationship because she wasn’t ready for marriage and that the couple’s age difference (Ryan is 14 years older) also played a factor in their split.

Although Ryan Seacrest seems to have moved on, it still has to be awkward to be forced to talk about the wedding of an ex, and to have to do it on live television.  But thanks to shady co-host, Kelly Ripa, Ryan had to do just that.

During Monday’s Live! show, the co-hosts were supposed to discuss the weddings of both Julianne Hough and fellow Dancing With the Stars alum Peta Murgatroyd to Maksim Chmerkovskiy, who also married this weekend.  Instead of letting Ryan talk about the wedding of Peta and Maksim, shady Kelly Ripa handed Ryan the picture of Julianne Hough’s wedding, forcing him to comment on Julianne’s wedding details.

Of course, Ryan Seacrest is a pro, so he congratulated the couple before adding that Julianne looked “stunning” in her wedding gown.  Although he stumbled a bit when looking at a picture of the couple who married on a lake in Idaho, saying, “I know this family.  I’ve been on this lake.”  Many viewers felt it was awkward for Ryan to announce that in the past he had been with Julianne Hough at the same lake where she chose to get married, but he was probably just caught off-guard at having to comment on her wedding at all.

The weekend finally arrived- And it was MAGICAL!!! The weekend my best friend, my love of my life, and my new husband @brookslaich and I brought our family and closest friends together to have fun, encourage love, and celebrate our marriage! I'm so grateful I get to spend forever with this incredibly kind, thoughtful, strong and adventurous man. I'm the luckiest woman in the world to be your wife! It was truly the most special time in our lives and because we believe so much in putting love out into the world to help inspire and encourage others, we have decided to share our special day with all of you. To get an inside look check out the link below! Much love to you all! ❤️ J+B http://people.com/tv/inside-julianne-hough-brooks-laich-wedding-photos/

Ryan recovered from the faux pas by saying to the happy couple, “Congratulations.  I wish them the best.”  But, Kelly Ripa was not about to let Ryan off the hook.  She then bluntly asked him if it was weird for him to talk about his ex.  Ryan assured her that it wasn’t, but the whole exchange was filled with tension.

The fact that Kelly Ripa forced Ryan to talk about Julianne’s wedding proves once again how difficult she is to work with.  Now viewers are wondering how long Ryan will choose to stay at Live!