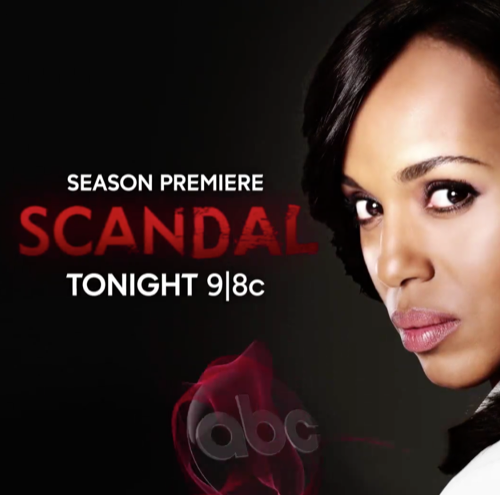 Tonight on ABC Scandal starring Kerry Washington continues with another exciting episode in an all new Thursday, January 26, season 6 episode 1 called, “Survival of the Fittest,” and we have the Scandal recap for you below. On tonight’s Scandal season 6 episode 1 premiere as per the ABC synopsis, “In the sixth-season opener, the election results come in for the presidential race between Mellie (Bellamy Young) and Francisco, and the outcome proves to be surprising.”

Tonight’s episode of Scandal kicks off with Huck and Quinn hiking through the woods, they’re searching for someone. The stumble upon a log cabin in the middle of nowhere. Quinn and Huck get within a couple hundred feet and the cabin explodes right in front of them – it looks like they triggered a bomb.

Mellie, Olivia Pope, and their entire campaign team are running around like chickens with their heads cut off as the Presidential election votes begin rolling in on TV. The news anchor reveals that there is one county left to determine who wins California. Olivia begins shouting at every one in the room to go vote – she wants to see “I Voted” stickers on every member of the staff.

Fitz walks in and announces that he just got off the phone with one of his contacts in California – and they are ahead by 2,000 votes. Mellie and her staff begin celebrating their soon to be victory. But, Olivia doesn’t look happy.

The news comes back on – they are done tallying California. The anchor announces that Vargas has won California and he is the new President of the United States. The room goes silent. Mellie is in denial, she begins ordering her staff to call constitutional lawyers and call for a recount. She is certain there was ballot tampering.
Olivia shouts at Mellie to snap out of it – they lost and there is nothing that they can do. It’s over. Mellie seems to be in a state of shock. Mellie reluctantly calls Vargas and concedes, the room is awkwardly quiet as she stutters through the call.

Olivia and Mellie sit in the bathroom on the floor and take turns drinking a bottle of wine. Mellie rants that she can’t believe that Cyrus Beene was on the winning team and made it back in to the White House.

Suddenly, Olivia and Melle hear screaming from the other room. They rush back to the campaign room and everyone is watching Vargas’ live speech. Someone in the audience apparently shot the President Elect while he was on stage giving his victory speech.

The media is in a frenzy. Fitz gets briefed by his staff and learns that the FBI has secured the sniper that shot Vargas – an American named Nelson McClintock, he has no ties to any terrorists and appears to be “homegrown.”

Jake and his team are already on the job. They have secured Nelson’s phone and he didn’t receive any calls before the shooting – it looks like the shooter was working. Fitz sends Abby to the hospital where Vargas is being worked on to secure the floor.

Olivia storms in to Marcus’ office and demands to know the status of Vargas. After some prodding he confesses that Vargas doesn’t stand a chance, he was shot in the stomach and arm, but the third bullet went in to his brain.

At the hospital, Abby watches as Vargas’ wife cries at her husband’s bedside. Then, the monitors began flatlining and Vargas takes his final breath. Before she slips away, Abby steals Vargas’ widow’s phone out of her purse so that she can’t call anyone and leak the news that the President Elect is dead.

Back at the White House, Fitz and Rosen are brainstorming and trying to figure out what will happen if Vargas is dead. Will Cyrus be President since he was running as Vice President? Or will the Electoral College vote for Mellie and Jake instead. Or, could it be someone else entirely?

Rowan gets Olivia’s wheels turning. She rewatches the footage of Vargas getting shot. Oddly, it was as if Cyrus knew the bullets were coming. And seconds before the sniper fired, he stepped away from Frankie. Olivia tells Huck and her team to get on it ASAP and find a link between Cyrus and the shooter.

Olivia rushes back to the White House and tells Mellie they are still in the race and Vargas is dead. But, Mellie announces she is done with the Presidency, the White House, and DC. She swears the town is cursed, and nothing but horrible things has happened since she and her family moved there.

Vargas’ widow is furious that Abby won’t give her a phone so she call her kids. Abby calls Fitz and presses him to make the public announcement that Vargas is dead so that his children can be reunited with their mother, who is currently still in lockdown at the hospital. Fitz says that Abby needs to keep everyone there until he is ready to make the announcement, and he’s nowhere near ready. The people are going to want to know who will be the President now that Vargas is dead, and Fitz has no idea who it will be.

Olivia heads to Fitz’s office. She tells Fitz about her suspicions about Cyrus hiring the shooter to take out Vargas. Fitz needs proof, he agrees to give Olivia until morning before he announces that Vargas is dead and throws his support behind Cyrus.

Fitz heads home and has a heart to heart with Mellie. He tells her that if she doesn’t want the Presidency, she can tell him, and she can just walk away – no one will ever have to know. Mellie announces that she wants the crown.

Quinn and Huck have bad news for Olivia – they haven’t found any connection between Nelson and Cyrus, and they have been up all night. They’re ready to throw in the towel. Olivia screams at them that Cyrus murdered his way in to the White House and they have to stop him.

Olivia marches in to the hospital and demands to see Cyrus. But, she’s shocked by what she finds. Hes standing in a dark hospital room, covered in blood, and staring off in to space. Apparently, he’s in shock, and hasn’t spoken to anyone since he was brought to the hospital.

Fitz visits Cyrus and tells him that he is supporting him as the next President. Fitz makes Cyrus promise that he will be a better man than he has been in the past, and he will be honorable and uphold Vargas’ legacy. Cyrus agrees and they shake on it.

Quinn, Huck, and Charlie are packing it up after reading to 800 voicemails on the tip line. Charlie is begging Quinn to go to the Caribbean with him, Quinn wants to postpone the trip. Huck kills the mood and tells Quinn that Charlie wants to take a trip with her so that he can propose to her. Awkward.

While Quinn and Charlie are arguing over the almost proposal, Huck makes a shocking discovery. Someone deleted one of the calls from the tip line before they got to it. It was left by a woman named Jennifer Field, she was a volunteer on Vargas’ campaign.

Fitz is totally unaware of the major break in Vargas’ shooting. He holds a press conference bright and early and announces that Cyrus will be taking over for Vargas as the new President Elect.

Quinn and Huck return to the office with a hand in a plastic bag, it’s all they could find of Jenny. Charlie finally is able to retrieve Jenny’s call on the tip line. She states loud and clear that Cyrus killed Vargas. It looks like Olivia’s hunch was right all along, and Cyrus played everyone.

Olivia heads to the White House to offer her condolences to Cyrus after the press conference. Then, she whispers in to his ear that she knows he killed Vargas, and she is going to prove it.