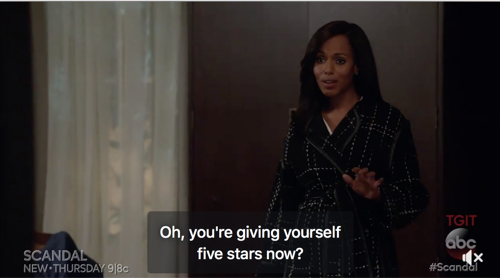 Tonight on ABC Scandal starring Kerry Washington continues with another exciting episode in an all new Thursday, October 12, season 7 episode 2 called, “Pressing the Flesh,” and we have the Scandal recap for you below. On tonight’s Scandal season 7 episode 2 as per the ABC synopsis, “Mellie hosts a state dinner for President Rashad in a step toward peace in the Middle East, and Olivia secretly puts Jake to work so that they have a backup plan. Meanwhile, Quinn’s team attend the party in an attempt to gain more high-profile clientele.”

Liv leaves Curtis in bed. He feels shunned. She assures him that she doesn’t need a date for the dinner tomorrow night. He asks her is she is sure. She smiles and leaves. Liv walks by a group of tourists in the White House. She enters her office to find Cyrus who is mad about the dinner’s seating arrangements.

Liv preps Millie for her meeting with President Rashad. Millie’s hope is to get him to sign a nuclear arms treaty. Rashad has a lot to tell her. Liv watches in irritation from the sidelines.

Liv meets with Jake. She asks him to get some dirt on Rashad, something that will help them get this treaty signed. At the dinner, Cyrus can’t seem to shake Glackland, a man he can’t stand. Quinn shows up with the gang. She promises Liv that she won’t embarrass her. Liv walks the room. She sees Curtis. He is there with a date as her plus one. She accuses him of trying to make a point to her. He tells her he isn’t. Does she want to meet his date? Liv rolls her eyes.

Millie sits at the head table with Rashad, sparing a bit but with humor. He tells her that the moment he says treaty to his people he is either dead or exiled. Liv watches from a distance. Jake peeks into the room. Liv leaves to find out what he has found. Jake has discovered that Rashad likes them young and Jake has photos.

Glackland is eating with his fingers. He slurps frosting off his cake. He gets right to the point with Cyrus. He has billions, but he wants to run for governor. Cyrus is an expert in this arena.

Liv leaves the dinner to see Jake. He has more. Liv enters the bathroom where Rashad is washing his hands. She hands him a folder. The young woman is his niece. He changed her name and enrolled her in a college in the states. Many in his country would be very angry. He better sign the treaty. Rashad doesn’t care about what she knows. He isn’t going to sign the treaty. He was warned about her.

Cyrus shows Glackland around. He makes himself comfortable in the Oval Office in a chair. Cyrus explodes and calls him a boob. He then goes on a tirade about respect and understanding the value of things. He will never win an election. Glackland gets up and leaves. Cyrus says he is sorry, but Glackland has walked too far ahead to hear it.

They listen to a performance. David grabs Abby’s hand.

Abby and Quinn drink by the bar. Abby sees Huck outside the room. He is sitting on the floor researcher the Army man he talked to prior whose pins are in the wrong order. The man isn’t who he says he is.

Curtis comes up to Liv. He wants to know why Rashad left early. She has nothing to offer him. He likes how she avoids.

Meanwhile, the man Huck suspects of being an intruder has pulled Rashad in another room alone under the pretense that Millie would like to talk to him alone. The man shuts the door and pulls out a gun. Rashad stands in shock. Secret Service comes rushing in.

They all meet in the Oval Office. Jake tells Rashad that they will find out how the assassin got in. Jake leaves to get to work. Millie asks Liv to leave so she can speak with Rashad. Millie wants him to sign the treaty. Rashad wants assurances. He wants an enemy country of his to sign the treaty as well. Rashad asks for a stronger drink. She sits down next to him. He tells her that her niece sees her as extraordinary. Rashad is happy to sit next to her. Millie softens. The moment is tense. He excuses himself.

Abby wants to know why David did that. He tells her that they are good together. She has to go. Meanwhile, Charlie and Quinn make it home. He thinks she needs to find someone with a btter background to showboat. She hits him and calls him stupid. What is he talking about? She is having his baby! She wants to get married now. He agrees!

Cyrus arrives back at the office. His assistant tells him a package has arrived for him. It is the multi-million dollar painting Glackland bought. There is a note. Cyrus would appreciate it more. His jaw drops to the floor.

Liv offers Curtis a huge story. Millie is going to hold a nuclear summit. They should celebrate. They head back to Liv’s, kissing in the elevator. When they get out, Fitz is leaning against the wall waiting for her.