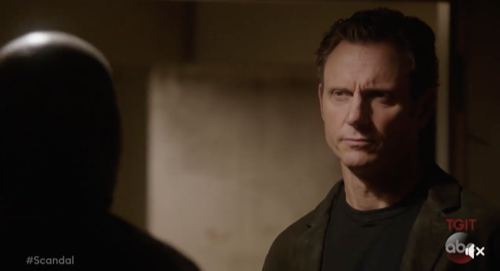 Tonight on ABC Scandal starring Kerry Washington continues with another exciting episode in an all new Thursday, October 26, season 7 episode 4 called, “Lost Girls,” and we have the Scandal recap for you below. On tonight’s Scandal season 7 episode 4 as per the ABC synopsis, “An unexpected client arrives at QPA and needs an important case solved. Meanwhile, at the White House, Mellie prepares for the upcoming Nuclear Summit with President Rashad and Prime Minister Nazari.”

Curtis and Liv are face to face with Fitz outside her door. Curtis excuses himself. Liv is mad. She asks him why he is there. Fitz wants her help on a project involving missing girls. Liv tells him to give it to Quinn. She has work to do. She shuts the door in his face.

Mellie is with Pres. Rashad when Liv comes in. Rashad leaves after Mellie is a bit forward with him. Liv wants to know if she knew about Fitz.

Liv asks Jake to look into Fitz. His return doesn’t feel right. In the meantime, Quinn and the team go through the file of missing girls. They need to find one girl to act as the poster girl that will raise attention.

Rowan meets up with Fitz. They go over how to deal with Liv. Rowan thinks Fitz should be the bait but Fitz doesn’t agree. Rowan wants Liv to fall in love with him again so they can take away

Cyrus goes to meet Glackland at his house to tell him that he can’t accept the painting. Cyrus apologizes for being rude to him. Glackland invites him in to play a real game. Hours later the two are laughing. They sit on the couch and begin to talk. Glackland makes a pass at Cyrus. Cyrus is uncomfortable. He gets up and leaves.

Marcus comes to see Liv who isn’t thrilled to see him. Marcus wants to see Mellie but Liv can’t allow him. Mellie has a full schedule.  Liv asks how Fitz is in Vermont. Marcus tells her that Fitz misses her.

Liv goes to Quinn’s to see the wall of missing girls. She gives the team some pointers – get the missing poster girl’s mother to talk. People will notice her more than the missing girl. Liv will provide some press exposure for them. While leaving Liv runs into Fitz outside the office. He asks her if she wants to go for a drink.

During talks, Nazari insults Mellie by saying that she is screwing him. Rashad stands up angrily. Mellie calls for a break.

Fitz goes on Curtis’ show with the mother of the missing girl. Curtis asks Fitz why he didn’t do anything when he was in office. Fitz responds that he wasn’t aware of the situation. Fitz goes on to explain that he isn’t going back to Vermont. His work is here.

Mellie come in the Oval to see Cyrus drinking with the painting. Mellie wants all the details. Cyrus explains that his ex-was like a model. He can’t lower his standards and date Fenton Glackland. Mellie admits that Rashad is making her feel all twitchy inside.

Liv goes to check in on Rowan. He confronts her about Fitz being on TV, her being lonely and her new path. He laughs that she has come to him for boy advice. He becomes agitated and begins lecturing her – he has been there before. She doesn’t want to hear it and leaves.

Mellie finally gets the leaders to agree. They begin to talk. The doors open abruptly. A rebel leader has taken over the capital of Bashran. Rashad is no longer the president as his country erupts into turmoil. Mellie is angry. Liv wants to let Rashad go. He is no help to the US now. Mellie knows he will be killed off they don’t offer him sanctions here. He can’t go home. Liv needs to think about it.

Fitz knocks on Liv’s door. She is drinking wine. She lets him in. He wants her to talk to Mellie. His missing girl’s story has fallen out of the news cycle. Liv tells him to go an talk to his ex-wife. She demands to know why he is really here. Because I love you he tells her. They kiss.

The next day in the Oval, Liv gives Mellie what she wants – the decision to decide Rashad’s fate. Liv also gives Fitz what he wants – help with his cases.

Quinn visits the missing girl’s mom to tell her that they found her daughter alive. Meanwhile, Cyrus goes to see Fenton. He is going to keep the painting for $20 so that it cannot be deemed a gift and in turn, he will teach him politics.

Jake calls Liv. Rowan has been talking to Fitz. Liv goes to see her dad. They need to talk.