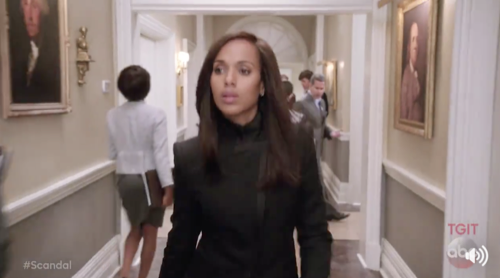 Tonight on ABC Scandal starring Kerry Washington continues with another exciting episode in an all new Thursday, November 2, season 7 episode 5 called, “Adventures in Babysitting,” and we have the Scandal recap for you below. On tonight’s Scandal season 7 episode 5 as per the ABC synopsis, “Olivia and Mellie assert their power like never before. Meanwhile, Cyrus seeks congressional approval to declare war in Bashran; and QPA keep close watch on President Rashad’s niece.”

Liv has Rowan in a chair. She tells him not to speak. She gave him ample privileges and now she is taking them away. She wants him to give a message to Fitz – go home! Rowan tells Fitz right away, pleading for him to return to Vermont.

Mellie holds a press conference about Pres. Rashad and her support. The next day the team talks. Liv knew this wouldn’t be received well. Rashad offers to return home, but Mellie asks him to stay. Rashad is worried about his niece. He needs her to stay somewhere safe.

Quinn and Charlie pick up Rashad’s niece who isn’t happy. They take all of her electronics.

Liv and Jake discuss what to do with the two groups dominating Rashad’s country. Liv thinks turning them against each other would prevent American causalities. Jake agrees. She heads to the Oval to see Mellie. Fitz is coming out. She asks him why he is still here. He tells Liv he has told Mellie everything and it is apparent when Mellie demands Liv come in and shut the door. Fitz smirks and walks off.

In the Oval, Mellie tells Liv she cannot believe that she killed Luna Vargas. Mellie also knows about B613 and she wants it shut down now. She is angry and wants Liv to do things above board.

Glackland comes to see Cyrus. While Cyrus talks to a senator looking for his support, Glackland texts, annoying Cyrus.

Liv goes to see Rowan. He failed to do the one job she gave him. He feels differently. He told Fitz and now he wants his bones back. Liv tells him that everything about him makes her sad. She leaves.

Rashad’s niece takes off and is missing. Quinn and the gang grow frantic.

Jake meets Fitz for a drink. Jake tells him to go home. He needs to let Liv be who she is meant to be – command.

Liv and Curtis are in bed. She wants him to use a certain line of questioning when Rashad comes on his show. Curtis wants to do things his way.

Cyrus finally snaps on Glackland. He can’t take the texting. Glackland laughs. He has been working on his phone, using an algorithm as Cyrus works and no-one in Congress wants a war.

Huck finds Rashad’s niece. She went to see her girlfriend.

Cyrus comes to see Liv. He tells her his findings. She doesn’t have the votes to go to war. He doesn’t want to go to war and she cannot bully him.

Liv is angry. She goes right to Fitz. He tells her that he doesn’t recognize her anymore. He isn’t leaving, not until the old Liv reappears. She storms out.

Rashad and Mellie discuss what to do in the Oval. Their conversation gets heated. They kiss but pull back. Rashad leaves quietly as Mellie looks silently mortified.

Liv goes to meet Quinn. Quinn admits she lost Rashad’s niece for a bit. She got her back but she knows what she did wrong. She forgot Olivia Pope 101 – ask the client what they want. This makes Liv think. She leaves.

Cyrus thanks Glackland for his help. He admits to Glackland that he may be good in politics. They kiss.

Liv goes to see Mellie. She asks her what she wants, what are her goals. Mellie wants Rashad alive, she wants him and she wants a peace treaty. Liv offers to start a campaign. Mellie points out that they don’t have that kind of time. She needs Liv to deal with it now. And she doesn’t need to know anything else. Liv tells her she will handle it.

Rashad comes into the Oval. Mellie tells him that he can return to Turkey before going home safely. They are about to kiss when Mellie pushes him away.

Quinn tells Rashad’s niece that she must return home.

Fitz comes to see Mellie. Liv is coming out of the Oval. She tells him she is sorry it had to come to this. Fitz goes in to see Mellie who tells him to go home.

Quinn and Charlie say goodbye to Rashad’s niece at the airport.

Liv goes to see Curtis. He tells her that he was attracted to her but now he doesn’t like her. He walks off.

As Rashad and his niece go to take off, the plane blows up.