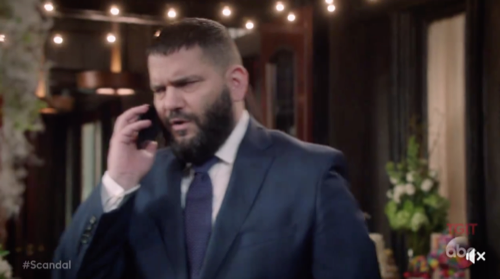 Tonight on ABC Scandal starring Kerry Washington continues with another exciting episode in an all new Thursday, November 9, season 7 episode 6 called, “Vampires and Bloodsuckers,” and we have the Scandal recap for you below. On tonight’s Scandal season 7 episode 6 as per the ABC synopsis, “Quinn and Charlie’s big day is celebrated by the Gladiators. Meanwhile, Cyrus, Mellie and Jake deal with a new crisis in the Middle East.”

Liv informs Mellie of Rashad’s death. Mellie is shaken. She tells Liv not to touch her. Mellie walks away. Liv has a flashback to Jake telling her it’s done – Rashad and his niece are dead. She tells him that they did the right thing.

Cy is running around Glackland’s house getting dressed. He needs to leave. Mellie called. It is an emergency. Glackland wants to know what is going on. He cannot tell him.

Mellie and Liv go over the details of Rashad and his niece’s bodies and how they will be transported. Liv goes to meet with Quinn. She has a little gift for Quinn for her wedding day. Quinn isn’t saying much. She seems shaken. Liv thinks its wedding jitters. Quinn is mad. She knows it was Liv who planted that bomb and killed Rashad and his niece. Quinn is disgusted. Liv tells her she does what she has to do. Quinn admired her. Liv tells her that those two people are not her family. Charlie is her family. She needs to go home and get ready for her wedding. She needs to do what is best and move on.

Liv watches the news reports. Huck shows up. He’s stressed. It’s Quinn’s big day. Liv calls Quinn and gets voicemail. Meanwhile, Mellie meets with the head of the new regime of Bashan. He assures her that the new regime will honor the nuclear treaty. Mellie doesn’t care. She has her own message – they better run and hide because she is going to drop every last American bomb on them.

Abby calls Huck. Quinn is missing. She left her ring behind and took off. Abby tells Liv who seems very nice. They all talk to Charlie. He doesn’t believe Quinn ran off. Meanwhile, Huck searches Quinn’s apartment, checking for blood, looking through her laptop. Huck reports back to the others. Quinn was taken. She was researching Rashad’s death, Huck tells them. Her ring was cleaned so there must have been blood on there.

Liv meets with Jake quick. Jake tells her it wasn’t him. He thinks Quinn ran off to build a case against them, to give her some more time. Liv demands he find her.

They begin to build a timeline. Liv helps while they all panic through the process. Curtis shows up. He is there to meet Quinn. She called him last night. Liv wants to know what Quinn had to say. Curtis doesn’t want to share. Curtis heads to the door. Liv runs to him. She tells him that Quinn is missing. Anything she told him could help find her. He tells her Liv had something to tell him about Rashad’s death – it was an inside job. Liv tells him not to run the story. It can only make the situation worse and put more heat on Quinn’s kidnappers. He doesn’t care. It is a solid news story that could bring Quinn home.

The team continues to try and track Quinn. Mellie calls Liv. She needs her back at the White House asap. Liv is trying but she needs to find Quinn first.

Liv and Jake meet. He can’t find Quinn, but he has a plan. He wants to put the blame on Glackland and his former employee Ladd who was on the tarmac the day Rashad’s plane blew up. They are both perfect to pin the incident on. Glackland was at the dinner the night there was an attempt on Rashad’s life and Ladd called Quinn the day that the plane blew up to tell her he saw something.

Meanwhile, Charlie is so angry he has tracked down Glackland on his own. He brings him to a warehouse where he straps him to a table naked wrapped in plastic from the shoulders down. He beats up and threatens him.

David comes in to see Liv. Ladd was found dead in his apartment of an overdose. Mellie calls on Jake. She asks him hypothetically if she needs him to take someone in the coup out, would he? He tells her yes. But she doesn’t give orders when he is off the clock.

Mellie goes to meet with Marcus. She doesn’t know what to do about Bashran. She wants to honor Rashad. He is very cold and cut and dry with her. He tells her to move. She tells him it is lonely at the top. He agrees and leaves.

The team discovers that Quinn called Curtis from the monument. They want to get footage of her there. Liv quietly gets nervous while Cy is relieved. Glackland can’t be their guy. The two of them were together last night. Huck tries to find Charlie. He locates him just as Charlie is about to cut into Glackland with a saw. Huck tells him he has the wrong man.

Mellie meets with the spokesperson for Bashran. She tells him that there won’t be a war. He is thankful. Jake watches on in approval.

Charlie breaks down when they watch the footage of Quinn at the monument. The footage has been cut.

Jake finds new footage of Quinn in the elevator. He shows Liv. Quinn really was taken.