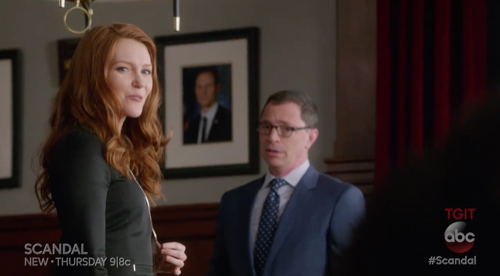 Tonight on ABC Scandal starring Kerry Washington continues with another exciting episode in an all new Thursday, February 9, season 6 episode 4 called, “The Belt,” and we have the Scandal recap for you below. On tonight’s Scandal season 6 episode 4 as per the ABC synopsis, “Cyrus ( Jeff Perry) faces a big challenge, but that does not deter him from trying to prove he’s not guilty. Meanwhile, Olivia (Kerry Washington) and her team unearth surprising new evidence relating to the evening Frankie got shot.”

Cameras flash while onlookers go crazy as Cyrus is brought to prison. Once there, he is stripped, fingerprinted and thrown into a sell for killing the president. Meanwhile, Mellie and Olivia are drinking and celebrating. Mellie is over the moon, twerking. Olivia doesn’t say anything, but Mellie’s celebration seems too early. While the rest of the team goes out to celebrate, Huck stays behind to watch videos of Meg.

The next day, Abby is upset that Cyrus will be prosecuted to the full extent – the death penalty is on the table. Abby pulls rank with David, insisting he change his mind.

Cyrus sees Tom behind bars. He tries to talk to him, but the guard shuts him down. If he doesn’t stop screaming, he is headed to general population.

Abby wants Elizabeth to get Cyrus a message. Elizabeth wants to know what she will get in return. A job? Abby agrees. Elizabeth runs to the prison to visit Cyrus. While she tries to give Cyrus the message, he is busy trying to get her to give Tom a message.

Huck installs a security system in Meg’s house (Jennifer’s friend). He won’t take payment, but when she offers dinner, he takes her up on it. Meg starts talking about Jennifer’s killer – he is still out there. There haven’t been any arrests. Huck heads back to the team to tell them. They all seem unsure while Olivia is worried that Mellie’s dream could be taken away.

Cyrus is desperate for a pen and paper. He asks a prisoner across the way what he needs to do to get one. The prisoner tells him he needs a belt more – he should be thinking ahead to when he can no longer take living in a cell.

During his indoor exercises, Cyrus tries to reason with the guard. He just wants a pen and paper. When he doesn’t respond, Cyrus threatens him. He knows he is a drug mule. Maybe he should tell his supervisor. Or maybe he can teach him how to shake the gang down that has him doing illegal things.

Huck shows Meg a fighter’s stance. He is trying to teach her how to throw a punch. She throws a punch that stuns him for a second. That was amazing – he tells her!

In bed, Grant and Angela discuss Cyrus’ case.   Angela tells Grant that Abby took the death penalty off the table, per Grant. He never wanted that and he didn’t give her permission. He jumps out of bed quickly to make a call.

Cyrus gets his pen and paper after reasoning with the guard. He gets his message to Elizabeth.

Grant calls Abby in. He reprimands her for trying to overturn his decision. He makes her understand in front of David and Angela that she will never do that again.

Michael visits Cyrus. He wants a divorce, the house and the baby. Michael is angry. He intercepted Cyrus’ message to Tom. He is disgusted. Cyrus tells him the love note was nothing but a ruse. Michael doesn’t believe it.

Grant holds press conference. He tells the public that he is for the death penalty. Cyrus cries in his cell. The guard offers him fresh air. In the yard, Cyrus is beaten by several men who voted for Frankie. The guards turns a blind eye.

Cyrus gets brought to the hospital. Michael shows up. He sits by his side. Olivia is also there. They tell Cyrus that Tom has recanted his story. Cyrus is free. Days later he is sworn in as the president! Cyrus is in the oval office, looking around. Mellie tells him he has to go. She doesn’t want blood on her carpet. The whole thing was a dream. Cyrus comes to on the ground outside the prison.

Cyrus calls Olivia from prison. He tells her that it wasn’t him. He never told Tom and he never asked him to kill Frankie. He pleads with her. He is a monster, but he is that bad. He needs her help. She tells him that she can’t help him. Olivia tells him that his bill has to be paid, his time is up, be a man that he can be proud of. He tells her that he is going to die in there. She hangs up.

The guard brings Cyrus his food. He gives him extra bread and butter. Cyrus just wants his belt. The guard agrees after Cyrus says that he will blame it on a guard he hates. The prisoner across the hall chimes in, he’ll vouch that another guard gave him the belt.

Quinn calls Huck just as he starts to kiss Meg. They have something on Tom Larson.

Meanwhile, Cyrus pulls a fast one on the guard with the help of his sociopath inmate across the hall. The prisoner chokes out the guard while Cyrus watches. He will call his buddy off if the guard brings them to Tom. They go to Tom’s cell. Cyrus’ crazy sidekick begins choking Tom, but Cyrus calls him off. Cyrus promised him a kill so he goes after the guard and kills him while Tom lays on the floor, struggling for air. He confesses to Cyrus that he never killed Frankie. He just wanted Cyrus to suffer it. At the same time, Olivia and her team come across evidence that Cyrus and Tom aren’t the killers.