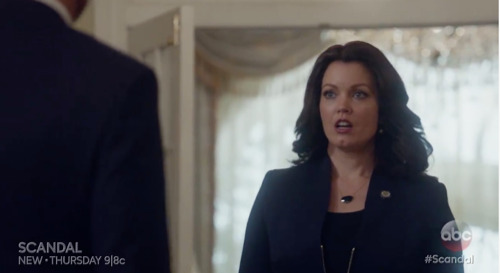 Tonight on ABC Scandal starring Kerry Washington continues with another exciting episode in an all new Thursday, February 2, season 6 episode 2 called, “Hardball,” and we have the Scandal recap for you below. On tonight’s Scandal season 6 episode 2 as per the ABC synopsis, “Flashbacks from the campaign reveal Olivia’s (Kerry Washington) desire to win and the lengths she was willing to go to for a victory. Meanwhile, Fitz and Abby are confronted with an unparalleled national crisis.”

Mellie accepts the republican nomination for the United States. At the after party, Olivia and the gang talk about being prepared for the campaign. Mellie thanks Olivia. Olivia tells her to watch out for Marcus. She sees the way that he looks at her. Olivia tells her to keep her knees together. Mellie tells her she has nothing to worry about.

In the oval office, Olivia is angry about the death of a woman at a cabin and Cyrus. The president dismisses Olivia after he blames her for pledging his support for Cyrus in front of the people. The president wants Abby to work on getting any evidence.

In the interrogation room, the prosecutors are willing to take the death penalty off the table if nelson admits. He tells them where to stick it. He wants to go back to his cell.

Olivia sends Quinn to the cabin to get all the evidence she can. Mellie arrives at the white house. The president wants her to sit down with Cyrus. He wants her to come up with a plan to get them all out of this mess. Cyrus offers her a spot as a VP on his administration. Cyrus wants to do what he can for the country. Mellie isn’t impressed. She tells him that there is no way she will accept. He tried to murder his way into the Oval. He says that he had nothing to do with Frankie’s death. She will regret it. He isn’t the bad guy.

Flashback, to Marcus teaching Mellie how to throw a ball. How to lob and throw heat. He teaches her while standing behind. They turn and just as they are ready to kiss, Mellie runs off. Marcus throws a fast one out of frustration.

Jake shows up to see Abby. She can prove Nelson is the killer. She needs his help…

On Mellie’s way out she runs into Marcus who is concerned for. She tells him not to be. Flashback to Mellie watching herself throw heat on national TV. She and Marcus watch together as they have a drink. This time Marcus thinks it is a good idea he goes. Mellie tells him not to go. The two kiss passionately before moving to the desk.

Quinn and Huck meet up with Olivia and Charlie to discuss the evidence and their next plan of attack. Olivia invites Angela to dinner while the gang goes through her car. Olivia questions her to see if she has slept with Grant. She says no, nothing has happened unless Olivia gives her the green light. Olivia tells her to go for it. Quinn manages to call in the case file # they need for Angela. Quinn grabs it and runs. The office texts Angela. She needs to get there asap.

Angela is angry when she shows up to find out that Nelson is being interrogated. Abby tells her it is on the order of the white house. Jake comes out. Nelson has confessed and peed his pants while doing so.

Huck is rebuilding the hard drive of the laptop that could prove Cyrus killed Frankie. Olivia and Mellie share a drink. David shows up – the constitution is going up in flames. Olivia pays a visit to Abby who tells her that Nelson admitted. Olivia knows she forced him to confess. Abby tells her that she is protecting the office. Olivia tells her that Cyrus will go to prison and Mellie will be the next president.

Marcus calls Mellie. She tells him Cyrus offered her the VP position. He asks her what Olivia said. Mellie says she hasn’t told Olivia. Marcus knows it is a betrayal. Marcus has to go. Before they hang up – Marcus misses her. He would choose her. She just has to choose him.

Flash back to Olivia and Mellie meeting up to go over her appointments and obligations. Mellie is starry eyed. She admits to Marcus that she did it – she slept with Marcus. She wept uncontrollable tears of joy. It was a religious experience. She has found the light. She has found what she thinks is love. Olivia looks scared and sad. She lies and tells her she is happy for her. But shares a few thoughts on how Marcus is known as a climber.

Huck fixed the laptop. He has found over 5k hours’ worth of footage. Abby shows up. Mellie hasn’t decided what she wants to do yet with Cyrus’ offer.

Flashback to Abby and Olivia discussing Mellie and Marcus’ relationship. Olivia wants her to break them up. To give Marcus a position he can’t refuse.

Flash forward, Abby pays Mellie a visit to tell her about Olivia’s past plan to break her and Marcus up. Mellie is mad, she visits Olivia to confront her. Olivia tells her that it had to be that way. Marcus was a sacrifice. It is either the presidency or Marcus. Mellie tells her about the VP offer. She tells Olivia she is done. “Good luck finding your way back to the white house now,” Mellie tells her.

Flash back to the day Marcus nabbed the job as press secretary. Mellie is angered at his good news. She feels like a stepping stone. She is done with him and he is done with her.

Quinn and Huck have a lot of footage but Quinn is busy worrying about getting married to Charlie. Olivia shows up and tells them they don’t have a candidate anymore and not to bother. Olivia tells Quinn to stop complaining and to just get married.

At the funeral, Olivia keeps an eye on Cyrus who looks away. Mellie takes notice. Mellie goes to pay a visit to Cyrus and also asks to see Marcus. Before they arrive she leaves. She goes to see Olivia. Huck interrupts. He has footage she is going to want to see. Olivia brings it to Angela and Fitz. Its Cyrus and Frankie fighting over something Cyrus did. Fitz wants the AG on the phone.