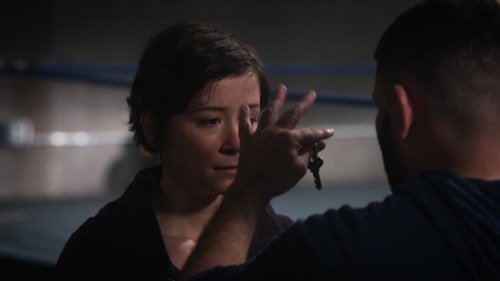 Tonight on ABC Scandal starring Kerry Washington continues with another exciting episode in an all new Thursday, March 23, season 6 episode 7 called, “A Traitor Among Us,” and we have the Scandal recap for you below. On tonight’s Scandal season 6 episode 7 as per the ABC synopsis, “Huck proves his loyalty to Olivia (Kerry Washington) when she asks him to complete a difficult task following the discovery of new information about Frankie Vargas’ assassination”

Huck and his lady friend Meg are sparing in the ring. Quinn comes in with Charlie. They can’t find Liv. Huck finds Liv outside of a run down diner.

She doesn’t want to get in the car until she asks Rowan to kill her father. He looks dumbfounded. He brings her home. She can’t stop pacing. She tells Huck  about Jake, Jennifer and how her father is the one who killed Frankie. Huck needs her to be sure that she wants her father dead. He will do it if she is 100%.

Huck is in his car with a toolbox. He spots Rowan on the street walking. He follows him into the subway. He looks for him in the train cars. He can’t find him.

Rowan is behind him. Huck turns. Rowan tells him that people are following him, the same people who forced him to kill Frankie. Huck aims a gun at him. Rowan  tells him that the people tailing him will kill Olivia if Huck kills him. A train passes, distracting Huck. Rowan disappears.

The people following him get off the train. When they leave, Rowan comes out. He tells Huck that there is a trader among them.

Huck returns to Olivia. He looks around the office with Rowan’s words on his mind as he stares at Charlie then Quinn. Huck is spying on Charlie and Quinn, as well as Liv. Huck follows Quinn to an apartment. He puts a gun to the back of Quinn’s head. He gets into the room. Jake, Quinn and Jennifer are all there.

Huck accuses Quinn of being the mole. They draw guns on each other. Jake thinks he knows who the mole is – Sandra. Back at the office, Huck and Quinn work at opposite ends of the table. Quinn wants Huck’s apology. Quinn pokes fun at Meg. Is she the mole? Huck tells her there is no way. He asks her of she is jealous of Meg? Quinn isn’t jealous just surprised that he hasn’t learned his lesson after Becky.Huck gets mad. He goes home. Meg is there. He asks her what she is doing there.

He apologizes. He wants her to be there. They have sex. Meg explains that she needs to talk to Liv about Jenny. She wants to talk to her on her own. Huck will ask Liv if she will talk to her.

Huck visits Abby. He needs to visit an inmate. In order to get her help he tells her that Jennifer is alive. She agrees. Huck goes to visit Becky in jail. He wants to know how she played him. She will tell him if he will visit her dying sister and take a picture for her. He will help her. She admits that she is playing her. She hates her sister. She asks who is playing him now. She calls him gullable. Huck tells her that she hasn’t changed but he has.

Huck is in his car. He calls Liv. She asks him if Huck killed Rowan. He hasn’t yet. Huck explains the story of Sandra. He thinks Rowan has changed. Liv strongly disagrees. If Huck doesn’t kill him by morning she will find someone else. Huck goes back home. He calls Meg and asks her what she is doing. He asks her to come over. He has news – he tells her Liv will take Jenny’s case. Meg arrives.Huck lets her in. Meg bought

Huck lets her in. Meg bought champagne. Huck hugs her. He asks her about her day. He tells her that he saw an old friend today. he asks her who she spoke to at the park. He was following her. Now he is going to inject her with an opiate. He begs her to tell him who she was talking to. Who she works for. He pushes her up against the wall. holding the needle close to her face. She tells him over and over that she has no idea what he is talking about. She tells him he is a monster – “go ahead and do, but I want you to look into my eyes,” she says. He lets her go.
She runs and leaves the apartment.

Huck meets the team in the parking garage. They show Huck Sandra in the truck. Liv wants to know if her father was such a romantic why is Sandra dead? Huck doesn’t believe any of them. Liv has a blind spot. He knows the truth. Rowan used to be a monster. People change.

Huck tells her that Rowan is a prisoner. He begs her to love him. Help him. Liv tells them they are going to finish the job while Huck gets rid of the body. He pulls a bug off of her before he buries her. He plays it for Liv. She cries. Liv pays Meg a visit to speak on Huck’s behalf. Meg thinks it is all insane. Huck cries. He promises he won’t hurt her. He brings her to see Jennifer. Meg shoots her and then Huck.