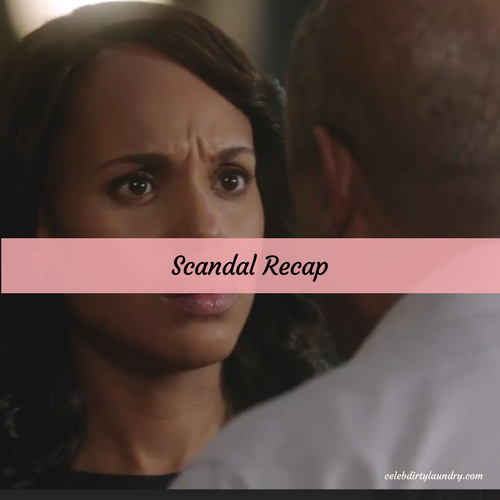 Tonight on ABC Scandal starring Kerry Washington continues with another exciting episode in an all new Thursday, April 20, season 6 episode 11 called, “Trojan Horse,” and we have the Scandal recap for you below. On tonight’s Scandal season 6 episode 11 as per the ABC synopsis, “Olivia (Kerry Washington) and the team are determined to bring down Peus, but as the electoral college vote nears, the fight for power claims another victim.”

Olivia and Mello are looking at a board with pictures of Cyrus hook Vargas. Mellie looks disgusted. She asks what the what the options are. Olivia tells her there is none. Millie is determined to fight. Olivia tells her that Cyrus is next in line. Mellie tells her to get off her cross. She was born for this. Olivia tells her she’s a better person than most. It’s why she would’ve been a great president. But she can’t take it like this. Olivia comfortable to to stand in silence. News reports reveal that Cyrus is innocent. Cyrus will be released immediately. Olivia talks to Fitz. Nelly will seed to Cyrus. Fitz hugs Olivia. She tells him how badly she wanted this. She leaves the oval office.

Abby brings Cyrus to a hotel that he will be comfortable in and be able to dodge the press. Cyrus wants to see his daughter. Abby has already asked and Michael will not allow it. Cyrus would like to be alone. Abby tells him that he’s the next president of the United States. He looks out the window for flashbacks of his past haunt him.

Mellie is in her office watching the press conference. She is distraught. Liz comes in she wants to know why she is conceding. Mellie explains to her that it is not that simple.

The team is all together at Quinn’s house with Huck in bed. He is wearing her bathroom while he works on the laptop.  Mellie shows up to talk to Olivia. She doesn’t need to roll over and concede. She wants to let the people decide. Olivia tells her that it is only fair to the country and Cyrus that she concedes. Mellie is not backing down. She tells Olivia she is sorry but her mind is made up. Liz goes to bat for Mellie talking to the press and taking part in interviews as she paints Cyrus is a murderer.  Olivia goes to bat for Cyrus.

Olivia shows up at Cyrus’s hotel room. She has suits for Cyrus. He tells her they won’t fit because he is lost 14 pounds. She asks if she can come in. He tells her no. The last time they spoke she said goodbye to him.  She will not let go of the door telling Cyrus to shower and shave. He doesn’t want to see her she left him for dead. She will not get anything from him. He tells her to leave him alone. This is all over. She wants to prove him wrong. She shuts the door in her face.

Rowan calls Olivia. She goes to visit him at his office. He wants to show or something. There is a taint box in the middle of the room. He asks her to step into it. It is a dead spot within the room where he can talk to her. He tells her to stop trying to help Cyrus. If she doesn’t they will kill her. There is no winning she needs to listen to his advice. She says goodbye to him reminding him of the survival of the fittest.

Olivia calls Mellie. She is angry and thinks that it Mellie is behind the interview. Mellie denies it. Olivia pays Fitz a visit. She tells him that she thinks Rowan is behind it. She wants Fitz to help her with Cyrus since they abandoned him.

Someone is knocking on Cyrus’ door. He opens it. It’s Fitz. He lets him in.

Fitz pores Cyrus a drink.  He drinks it down quickly and asks for a second. It is weird for him to be out. He got jumped in prison and left for dead. Fitz apologizes to him. Fitz tells him that as his president he must step up and take the Oval Office.

Cyrus is dressed in a suit on the steps with the press in front of him. During his press conference he talks about prison. And how he let everyone down. He doesn’t feel like he deserves to be president. Frankie deserved to be president because he was different. He is offering his service in honor of Frankie. He wants to become the next president using Frankie’s visions as his moral compass.  Rowan watches on, distraught.

Mellie goes to me Liz. Liz wants her to meet her benefactors. They are the same people that through and Rowan and killed Sondra. Melanie doesn’t want to win this way she wants them all to leave now. They tell her that she will be president and she will do what they say. The female benefactor swings a golf club in to lose his head and then beat her on the rug. Blood splatters all over Mellie. She will agree to their terms and they will kill her children.

Fitz’s girlfriend Angela comes home angry with an envelope. She hands it to him. She has proof that Olivia transferred money and id responsible for the murder of Vargas. Angela is going to have her arrested.

Olivia arrives at Mellie’s office to see Liz dead on the rug. Mellie tells her about the benefactors. Olivia tells her that it’s not too late they can figure this out. Millie tells her there’s no way out of this. Mello is trying to hyperventilate. Jake comes in the room to see the scene. Olivia leaves and Jake stays there to take care of Mellie. She apologizes to Jake. He tells her not to apologize he is her VP. He helps her up and tells her to go and change your suit.

Fitz tells Olivia that Angela is going to serve a warrant. Olivia is happy. If she is a rested then nobody will vote for Mellie. Fitz is against all of this there’s no way he’s letting Olivia go to prison and take the fall. Fitz reminds her that her father is guilty and that he does not want to lose Olivia forever. If he stops her she will never see him again. He tells her not to do this. She leaves the oval office before apologizing.

Olivia is with Cyrus in his hotel room. She tells him that he has to do this – he has to become the next president.

Fitz is sitting in his office. Angela she is angry that they are not arresting Olivia. He tells her that he has moved her home office. She’s angry. Olivia goes to pay going to visit. The FBI is there. They’re arresting Rowan. The orders came down from the White House. The votes come in – Mellie is the next president. Olivia is angry she shows up to yell at Fitz. He tells her to calm down he has her father with him – he is safe. They are going to take down the benefactors together. They kiss!