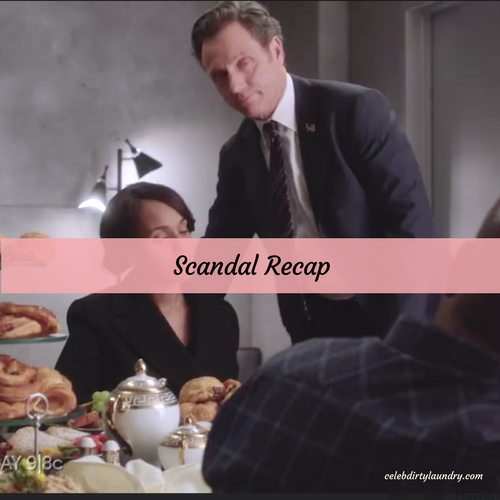 Tonight on ABC Scandal starring Kerry Washington continues with another exciting episode in an all new Thursday, April 27, season 6 episode 12 called, “Mercy,” and we have the Scandal recap for you below. On tonight’s Scandal season 6 episode 12 as per the ABC synopsis, “Peus’ iron grip seems inescapable to Olivia and everyone she holds dear, but then a shocking threat to the White House turns everything on its head.”

Olivia wakes up next to a sleeping Fitz. She gets up to go visit her dad who is eating breakfast. He is still being guarded by Fitz’s men. Fitz comes in. Rowan appreciates the protection but he needs to leave, he wants to go to Paris or Zanzabar. He gets up to leave but he can’t. Fitz won’t let him. Two men will shadow him whatever he goes. He cannot leave the grounds. Fitz tells him he is still a prisoner.

Abby and Leo are in bed. Abby is in a bad mood. He wants to know what he did wrong. She reminds him that it’s not always about him.

Mrs. Vargas is still doing press. She calls on the White House to unite the people. Meanwhile, Huck is back at work. Charlie comes in. He asks him where Quinn is. Charlie seems angry that Quinn has been helping Huck recuperate, fluffing his pillow and crawling into bed with him. Charlie leaves in a huff.

Mellie is working in her office. She’s trying to make some decisions, but she can’t because she is being controlled by the female villain who tried to kill Rowan.

Theodore visit Olivia at her office. He does not like Jake as a candidate. He wants Jake to step aside or he will release pictures of Jake wrapping up Liz’s body. He thinks he is the perfect candidate. Olivia tells him that she plans to destroy him and everybody close to him. She shows him the door. Huck asks Olivia what they’re going to do, she has no idea.

She can Olivia me. Jake refuses to step down. Olivia thinks he should work as the head of the NSA. If he doesn’t leave they will kill him.  Jake wants to take them down. Olivia tells him to resign. They will figure out what comes next.

Quinn tells Huck that she needs his help. Jake is having a press conference and Charlie is MIA. He did not come home last night. She makes an excuse, saying he probably forgot to tell her his plans.

The next day at the White House, Abby, Fitz, Liv and the super female villain all meet in the oval office. The super villain introduces herself to Fitz, he tells her to cut the crap he knows who she is. The doors burst open. The police burst in. A drone has entered the building. They are all separated. The female villain is brought into another room, away from Mellie.

Olivia and the others are waiting for Mellie in the other room. The drone was a fake. They have 75 minutes to work with her. Huck and Quinn are behind the drone. She asks him about Charlie. He tells her that Charlie thinks they have feelings for each other.

Mellie, Cyrus, Fitz, Jake, Olivia and the others are all brainstorming. Olivia invites Rowan into the fold. They need his help. Rowan demands that Fitz ask him for help in front of the whole room. Fitz does say. Rowan turns him down. Cyrus and Mellie fight. Seconds later, Fitz and Rowan fight.

Rowan tells the entire room that they are worthless. All of the men have lost. It’s over, he tells them as they all sit quiet. Rowan leaves the room to get a drink.

The press reports on the drone. Cyrus goes to see Rowan in the other room. Cyrus needs a strong drink. He brings Rowan to the wine cellar. The two laugh.

Fitz and David talk. David is down about always falling for the wrong woman. Fitz tells him that there is nothing wrong with him. He is attracted to powerful woman.

Cyrus and Rowan bond over prison while they drink. Rowan gets up to select the next bottle of wine. Cyrus stands behind him, playing with the corkscrew, eyeing Rowan. He lunges, but Rowan spins quick, breaking a wine bottle in the process. He has a piece of glass in his hand. You really aren’t going to try and kill me are you, Rowan asks Cyrus. Cyrus breaks down. He just wants Frankie Vargas. The country needs Frankie Vargas. Rowan walks away.

Jake asks Liv what she is fighting for. Fitz? For what? He asks. Jake tells her that Fitz isn’t the answer. Liv tells him that she doesn’t have time for this. She needs to save Mellie.

Mellie sits alone. She is scared. The gun is to her head, metaphorically. It doesn’t matter what Liv and the others do.

The clock is ticking and they have all had it. Mellie is ready to push back. She is going to name her own VP. She offers Cyrus a hand, but he doesn’t want it. They all leave the room with smiles.

Huck has found Charlie by GPS. Quinn shows up. Charlie is eating. Quinn gets in his car. She reassures him that she loves him and Huck, two different kinds of love. She wants to marry him. They kiss.

Mellie takes the podium for a live conference. She announces her VP – Luna Vargas!

Olivia Pope pays the super villain a visit. She tells her that she has taken Mellie back. She has security take the woman away in cuffs.