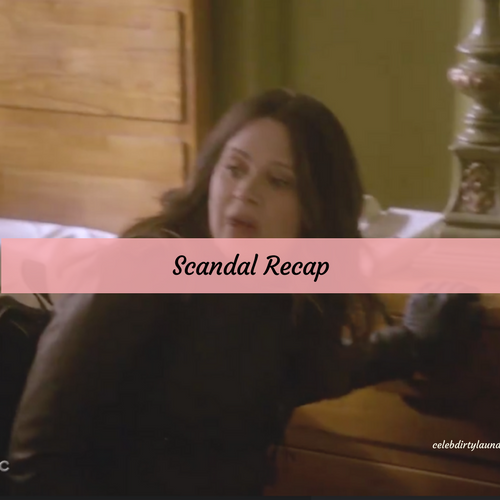 Tonight on ABC Scandal starring Kerry Washington continues with another exciting episode in an all new Thursday, April 6, season 6 episode 9 called, “”Dead in the Water,” and we have the Scandal recap for you below. On tonight’s Scandal season 6 episode 9 as per the ABC synopsis, “It’s a race against time when OPA’s investigation into the conspiracy puts one of their own in grave danger.”

Tonight’s episode of Scandal kicks off with Jake heading in to Jennifer’s hotel room – when he arrives the room is empty and spotless.

Jake rushes to Olivia’s headquarters, he confronts Olivia, Quinn, and Charlie, demanding to know what they did with Jennifer Fields. They swear they don’t know anything about her whereabouts, but they put two and two together and realizes that Huck and Meg went to her hotel room. Huck’s phone is going straight to voicemail. Olivia thinks that Meg is the mole – Olivia shouts at Charlie to bring Huck back to her.

Quinn and Charlie head to the hotel room to search for clues. They spray the room down with chemicals and realize that its covered in blood. Too much blood for anyone to survive. Quinn begins panicking.

Olivia fills Abby in on Huck’s disappearance. She shows Abby photos, and asks her to get them to Webster and have them ran through the image search database. Abby is rattled, but reassures Olivia she will do everything she can to help.

Meanwhile, Huck isn’t dead…yet. He’s riding in the trunk of a car – Meg drives him out to the middle of nowhere in the desert, he’s badly wounded and bleeding, but he finds a crowbar to defend himself when she opens the trunk. Little does Huck know, she’s not opening the trunk. She puts the car in neutral and pushes it over a cliff in to a lake, with Huck alive in the trunk. He begins panicking as the trunk starts filling with water.

Huck has an out of body experience, he pictures Olivia and Quinn talking him through it. He manages to gain his composure and kick in the back seats of the car – but the windows won’t open. Huck is running out of air, and wasting time arguing with Olivia and Quinn in his head. He manages to get the door opened, but there’s a bolder in the way and there’s not enough room for him to get out of the car.

Just when it seems hopeless, Huck manages to shatter the glass and make it out of the car and up to the surface of the water for air. But, now he has to muster up enough energy to swim to shore, which isn’t easy with his wounds.

Abby corners Meg and demands to know where Huck is, or his body. But, Jennifer brushes her off. Abby is starting to crack, she heads to Fitz’ office and tells him that she needs a friend, not a boss right now.

Huck makes it out of the water, he’s hallucinating and arguing with himself. It’s only a few hours before sunset, then dark, and there’s no way he’ll survive the night with his wounds, or without the coyotes eating him alive.

Olivia is a mess over Huck. Marcus gives her a pep-talk and reassures her. Jake returns with the photos of Meg, he got a hit off from one of them, he shows Olivia a photo of Meg meeting with Abby. Olivia snaps, and Abby shows up to talk to Olivia at the absolutely worst time. Olivia slaps Abby repeatedly and screams at her, demanding to know where Huck is.

Meg is on the run, and appropriately bleached her hair blonde. Thanks to an air gap laptop of Huck’s, Quinn and Charlie track down Meg. Quinn pulls a gun on Meg and demands to know where Huck is.

Abby explains to Olivia that she cut a deal, Cyrus in exchange for Jennifer. She had no idea that Meg was going to take Huck out, and she has no way of finding out where he is. Olivia scoffs that Abby is worthless, or orders her to take a seat in the office and won’t let her leave. Olivia promises Abby that when Quinn returns, she will unleash her wrath on Abby, and Olivia won’t stop her.

Meanwhile, Quinn is busy unleashing her wrath on Meg and torturing her with no mercy. Meg isn’t talking – so Quinn cuts off a couple of her fingers. Charlie watches in the background, and is clearly getting a bit queasy. Just when it seems like Meg is going to talk, she snarks at Quinn, “No wonder Huck loved me and not you.” Quinn snaps and slits Meg’s throat and kills her.

Quinn and Charlie return to headquarters and Charlie explains that there only lead is dead.Olivia snaps at Quinn that she hopes she feels good, now Huck is dead because of her. Olivia heads to her office to start pounding drinks, Charlie barges in on her and tells her that her team needs her – she needs to go in there and fix them. Olivia says that Huck is clearly dead, and there’s nothing she can do. Charlie won’t take no for an answer, he reminds Olivia that she’s a miracle worker and miracle workers don’t get to quit.

It looks like Charlie’s speech was effective, Olivia gives the remaining Gladiators a powerful speech. She says that whether Huck is dead or alive, they are pulling off the impossible, and they are finding Huck. Everyone gets back to work, pouring over surveillance footage photos and making phone calls. Even Abby lends a helping hand. They decide to run a trace on Jennifer’s cell phone in case she was with Huck.

Jake and Olivia head to the cliff where the cell phone’s last ping was, they find Huck lying unconscious in the dirt. They rush him to the hospital. The doctors say that Huck is stable for now and breathing on his own, but when he wakes up – if he wakes up – the doctors warn that he could have severe brain damage.

Fitz marches in to the hospital with a dozen men in suits, Olivia breaks down and tells Fitz that Huck might not make it. He hugs her and comforts her, and offers to help her team any way that he can. Fitz knows about Abby, he wants Olivia to forgive her. But, that’s not happening. As far as Olivia is considered, Abby is the one that put Huck in that hospital bed.

Tonight’s episode of Scandal ends with Quinn crying at Huck’s bedside. Suddenly he opens his eyes and looks around, Quinn’s shocked, she crawls in to his hospital bed and curls up with him. Charlie watches their emotional scene from the hallway.

Olivia heads out of the hospital, and she finds Abby sitting on a bench sobbing. She sits down with her and takes Abby’s hand in her’s.