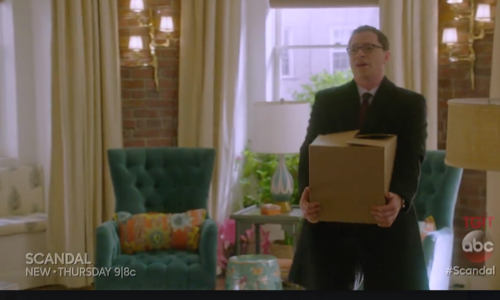 Tonight on ABC Scandal starring Kerry Washington continues with another exciting episode in an all new Thursday, May 11, season 6 episode 14 called, “Head Games,” and we have the Scandal recap for you below. On tonight’s Scandal season 6 episode 14 as per the ABC synopsis, “President Fitz considers his legacy. Meanwhile, the Gladiators question what’s next for their team; and Jake finally discovers the motivation behind Peus and the mystery woman’s reign of terror.”

The press secretary notifies the public that the drones have been shut down. Quinn shows Huck her wedding dress. Rosen pays Rowan a visit. Rowan tells him he is retiring. Rosen is there to get more details about who Samantha really is.

Olivia talks to Fitz about Abby as he gets ready. Fitz leaves. Olivia takes a stack of prisoner pardons with her. Fitz is in the office. He tells Abby to work from home. She gets angry. Meanwhile, Olivia brings the pardons to the team. David shows up at Abby’s. He needs to put a box in her fridge. Abby opens it, its Samantha’s head. He explains that he needs to know who she is.

Fitz meets with his press secretary about his final days and his farewell speech. The two start to talk about unemployment. Things become uncomfortable.

Olivia and the team go through the pardons to find a case to work on. Quinn pays a visit to a prisoner, who they think suffered a gross miscarriage of justice. Quinn fills Olivia in, but she is distracted. She leaves abruptly to vet Mellie’s cabinet.

Jake takes DNA from Samantha’s head. He tells her she needs to keep the head in her freezer for another day. She gets very angry.

Mellie and Liv go over her choices for her cabinet. She mentions Marcus, assuring Liv that it’s over between them so working together won’t be a problem.

The team, minus Liv, go on a little road trip to a bar to talk to a key witness in the case they are working. The witness admits to being the murderer. He’s racist and arrogant, threatening them. Guns are drawn. They manage to get out alive.

Rowan and Liv are out to dinner. He gives her a speech about maintaining her power. He is proud. She tells him to take a break and come back. He tells her that he is leaving, this is goodbye.

David is sleeping at Abby’s. He can’t stop pacing. She tells him to get in bed. They build a pillow wall. David is still in shock that he drove around with a head in his car. He’s disappointed that he was taken with Samantha. Abby can’t blame him. She fell for it too. She is surprised that she could be so evil. They meet over the pillow wall and kiss.

Quinn is in Liv’s office when she arrives. Liv is irritated that she is in there. Liv thinks Quinn’s feelings about a case are ridiculous. She can’t bring this case to the president because of a feeling with no hard evidence. Quinn questions Liv’s focus. She feels like it isn’t on the firm, but on the prestigious circles Liv can congregate. The two fight. Liv dismisses Quinn after she tells her to shut the case down.

Quinn is outside the jail. She can’t go in there and tell the prisoner that she failed him. She isn’t going to give up. Quinn goes to the white house to talk to Fitz about pardoning him. She tells him about the case. He listens, shakes her hand and sends her away. She refuses to leave. She wants him to sign it. He tells her to take a seat.

Marcus us packing his things. Mellie comes in. She tells him that she would like him to stay on as a communications director. He refuses politely. He is going to run Grant’s foundation. He wishes her the best before saying goodbye. She is stunned and disappointed.

Abby and David are eating dinner. The phone rings. The DNA test is in. Her name is Gertrude. She lives in a very average apartment. David is surprised. They learn that her and Peus were taking orders from someone else.

Fitz sits down for his live final interview. He plans to kick off his last weeks with a few pardons. He mentions Quinn’s case. He plans to work on forgotten families who need a safety net.

Liv arrives at the firm. Quinn explains why she did what she did and she isn’t backing down. Liv tells her it was a test. She shows her the bank accounts and explains that her office is now Quinn’s.

Jake has found the bigger bad, the boss of Samantha and Peus. Rowan gets stopped before he gets on the plane, Liv needs him to protect her from a woman they all fear and he knows.