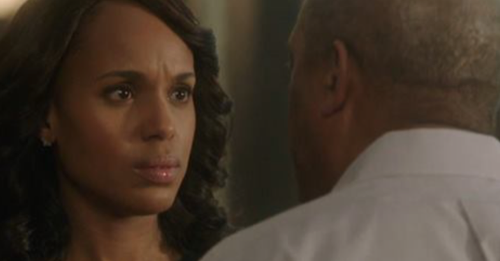 Tonight on ABC Scandal starring Kerry Washington continues with another exciting episode in an all new Thursday, May 4, season 6 episode 13 called, “The Box,” and we have the Scandal recap for you below. On tonight’s Scandal season 6 episode 13 as per the ABC synopsis, “As the future of the country hangs in the balance, Olivia and Fitz are at odds with Rowan. Meanwhile, Jake employs surprising tactics to manipulate the Mystery Woman.”

Luna Vargas is giving her speech as the new VP. Meanwhile, Fitz is in a meeting with homeland security. There are 9 drones hovering over major cities. Peus calls Olivia. He wants Mellie back. He knows about their stunt with the drone. He is behind the 9 drones, they are fully armed and ready to blow. The TV in front of her goes to static. He detonated a drone in Dallas. He will blow the other 8 if she doesn’t react and give him what he wants.

Fitz demands answers from the homeland security. News reports play out while Rowan and Olivia talk in his cell. Rowan shuts off TV. He needs a drink. It will be one last final drink before he goes. Olivia is angry – he just wants to run. He tells her if she doesn’t leave with him now she will die.

Fitz meets with Mellie, Jake, David and Olivia. Olivia tells them that she knows Peus is behind it. Jake pays Samantha a visit in an interrogation room where they are holding her. He wants to know where Peus is. He offers her a deal. Tell them and she can go free. She refuses to accept, her employer will track her. There is no way out for her. Jake slams her head down on the desk. He cuts out a GPS device in the back of her neck with a pocket knife. She screams. He gets it and leaves.

Jake brings the device to Huck. Abby is hiding in the office. Cyrus shows up. Why isn’t she helping her boss, he asks.

The white house speaker holds a conference. He is very evasive about who is behind the attacks. Fitz is in the room with his team. He is informed that the drones are moving. Huck isn’t having any luck. Peus calls Olivia. She refuses to bend. He detonates the drone in Philadelphia.

David calls Fitz. They can’t find Peus. Fitz tells Olivia that her father needs to talk. They visit him in his cell. He refuses to help Fitz. Olivia pleads with her father. Fitz grabs him by the collar. Olivia begs Fitz to let go. He leaves the room. Olivia asks Rowan what they did to him. He tells her to leave too.

Abby updates Fitz on her efforts. Cyrus sits in. He has great advice. Fitz tells him to put a tie on. He needs him with him. David questions Olivia about packages her father received.

Cyrus has an idea. Samantha has no access the news. Jake visits her. He tells her that they have Peus. They are offering him immunity. They don’t need her. He just wants to see her face when she realizes she is screwed. He gets up to leave. She cracks. She will give him everything for Peus’ deal.

Olivia asks Huck for surveillance video of her father. She needs to know what was in the packages he received from Peus. They watch video. He received a brick.

David sits with Samantha. Her real name is Grace. He wants her to sign the deal. She asks him to start over. He tells her that she is disgusting, he hates her. It was all for pretend. She calls his bluff on Peus. He slaps her. She is never going to get out.

Fitz pays Rowan another visit. He asks him about the bricks, the boxes. Rowan explodes. He finally breaks. The human head weighs 9 to 11 pounds. The bricks were reminders that if he stopped cooperating, it would be Olivia’s head in the box. Fitz tells him that Olivia is his legacy. He leaves the room.

Fitz sits with Olivia. There has been 63 casualties. There is a knock at the door. It’s Rowan. He needs to talk to Fitz alone. Rowan apologizes. He wants to help, and to help make Samantha talk. They bring Rowan to see her. The door opens. Rowan grabs the guard’s gun. He demands her cuffs be undone. He wants a guarantee. He will help her run if she gives him freedom. She agrees. They run.

Mellie tells Olivia she is going to turn herself into Peus and Samantha. Olivia refuses to give up. She won’t let her either.

Rowan holds up his promise to Fitz. He meets with Peus, leading Jake to him. Jake shoots him. Rowan stabs Samantha with a fossil. A tooth for a dinosaur that he puts in the dinosaur after with a laugh. The crisis has come to an end.