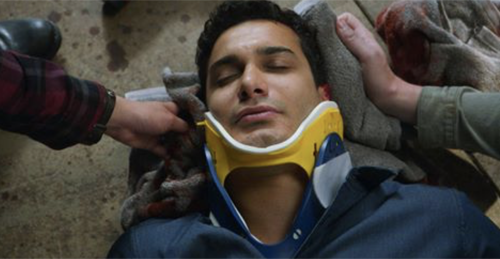 Tonight on CBS their hit drama/comedy Scorpion airs with an all-new Monday, December 11, 2017, season 4 episode 12 and we have your Scorpion recap below!  On tonight’s Scorpion season 4 episode 12 “On Christmas Eve, when Walter chooses work over spending quality time with his friends, he falls down the stairs and hits his head, and as he lays unconscious, he enters a dream world where Team Scorpion never existed.”

Happy comes in to see Walt reading. She asks him to talk for a minute. He tells her he is busy. She throws his papers on the floor. She needs to know what to get Toby for Christmas. He tells her a scented candle.

Sly and his student Addie are working on a video game. There is a glitch that Sly cannot stop complaining about. Walt doesn’t care. He tells him that they need to leave soon for a job they have. Paige tells him that they are not working. It is Christmas Eve. They all have plans. Walt refuses. He will do it all himself. Cabe hangs back. Walt tells him to go. He doesn’t need him. He is working on a server upgrade.

Walt heads down the stairs with some supplies and takes a tumble. He wakes up married! He heads upstairs. Flo is there. She calls him honey. He sees a photo of their wedding day on a nearby bookshelf. She tells him they need to go soon to campus. They should be able to get plenty of work done. She gives him a Christmas kiss.

Walt is outside. Ray shows up. They see a car accident. Walt runs over with Ray. He is the one trapped in the car. Ray tells him it is a manifestation.

Flo comes into the garage and finds Walt on the ground bleeding. She calls 911 and then Cabe.

Meanwhile, in Walt’s unconscious state he is struggling to figure out what is going on. In this alternate reality, Cabe is the police chief.

Toby and Happy arrive at the garage. Toby examines Walt. He is bleeding in the brain.

Walt and Ray arrive at the precinct looking for Cabe. Addie is an officer. She is at the front desk and tells Walt she doesn’t know who he is but he needs an appointment. Cabe comes out after Walt begins to yell. After some begging, Cabe agrees to help him free the man in the car. Cabe tells him they will need a car specialist. Walt wants Happy. Cabe knows who she is – she has her own podcast show.

They come to see Happy. She has no idea who Walt is. She is reluctant to help until Walt insists he knows her and shares personal details he knows about her. She thinks he is a madman.

In reality, Happy gets her drill and she and Toby begin drilling into Walt’s skull to alleviate the pressure. Sly comes in and passes out.

In Walt’s unconscious reality, Happy, Cabe and he arrived at the scene of the accident. There is a car missing and a box truck leaning on the small car Walt is in. They get to work trying to figure out a plan. They stack film reel canisters under the box truck to keep it from crushing the car. It isn’t working. Walt announces they need Sly. Everyone knows who he is but they know he is too busy to help now that he is a rich mogul.

They head to see Sly. Walt cannot get past his secretary, but after some screaming, Sly agrees to see him. Walt tells Sly he knows him. He knows his innocence and his OCD towards things. He also knows he needs help solving a problem. Walt can help him if he helps Walt. Sly agrees. They head to the scene of the crash. After some strategizing, Walt declares they need Toby. The gang all knows him as a speaker. They track him down and bring him to the scene after Walt promises to get him a date with Happy.

The gang is at the scene. They need more help. Walt needs to find Paige. They track her at a diner. When they arrive they are told she owns the place. Walt sees Ralph. He says hi. Ralph doesn’t know who he is. Paige comes to see Walt. She doesn’t know who he is either. Walt starts rambling about how he knows both of them. He needs their help. He talks Paige into saying yes by sharing that he knows all about her dreams for Ralph. She agrees to help him and the team.

All arrive on the scene. Paige starts organizing them and giving them a speech about being ordinary.

In the real world, Paige arrives and screams when she sees Walt on the floor bleeding from the head. They are all waiting for the ambulance.

In Walt’s unconscious world, they manage to save Walt in the trapped car.

Walt wakes up in the hospital. Ray is there which confuses Walt. The rest of the gang is also there and quick to converge on Walt in his bed to ask him how he feels. Walt tells them all about his crazy subconscious time out. He tells them all he is sorry he told them before his fall that he didn’t need them. Food arrives. They start organizing. One by one, Walt gives them all hints about what they should get each other. Flo arrives. Walt acts strange when he recalls his dream.