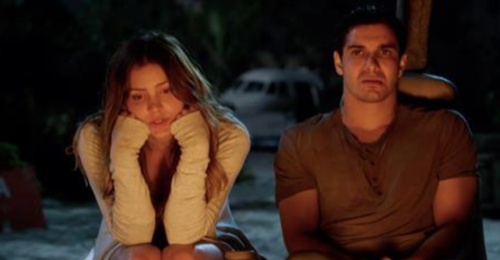 Tonight on CBS their hit drama/comedy Scorpion airs with an all-new Monday, May 15, 2017, season 3 finale episode and we have your Scorpion recap below!  On tonight’s Scorpion season 3 episode 25 as per the CBS synopsis,  “In the Season 3 finale, three weeks after crash landing on a deserted island, tensions run high for the team when they must battle to overcome their relationship obstacles with each other in order to be rescued.”

The gang is still trapped on the island. Together they all work on digging a hole and installing a turbine to create condensation for drinking water. Walter has page test it. She thinks it is amazing. Paige is the group’s cook, she has made fish with coconut. Toby is responsible for everybody’s medical care. He is still working on the pilot’s bones that are healing nicely. Everybody is responsible for Ralph’s education, teaching him about the subject they know. Happy and Toby just want privacy but can’t seem to get any time alone.

Walter tried his best to create things that could alert the outside world while till be attempting to build rafts that would sink. All of these repeated failures depressed the group. After eating the same thing over and over everyone became more and more miserable. Cabe made his own attempt with a message in a bottle.

While Sly spends his time writing in his journal in his bunker alone the others divide up into two teams because of the fighting so they can try to find ways to get off the island.

Walter, the pilot and Happy team up to use magnets as a solution. Toby, Paige, Cabe and Ralph stumble upon an oil drum, several of them on the beach underneath the sand. They must’ve fallen off a tanker. They use it to build a raft. Meanwhile, Walter thinks he has the ultimate plan. Toby and Walter go toe to toe over who gets the radio. Sly, who has completely lost it, comes out of his bunker to inform them that no one gets the radio, he has hid it.

Sly makes Walter and Toby present their cases to determine who will get the radio. Each of them rip apart each other’s plans. It comes to light that happy was also helping Toby’s team.  She is desperate to get off the island.  Paige also helped Walter’s team because of her own desperation. Sly determined that both of their plans are ridiculous. No one gets the radio. They all attack sly. Walter threatens to eat his pet lizard.

While the entire team is arguing Ralph is taking off to build his own way off the island. One that is dangerous. They all run to find him just in time as he causes an explosion. Ralph and the pilot are covered in sand. The gang desperately digs them out. Ralph is breathing. The pilot is stuck and the more they dig the more the sand continues to scatter and cover his head. Happy gets a bucket and pokes holes in it to cover his head while they excavate around him. Cabe manages to get his arms around him and pull the pilot out.

Cabe, Toby and Walter build a quick SOS in the sand with materials while Happy grinds up pennies to create metallic flakes. Walter sets fire so that the SOS is apparent to the plane. The plane goes by once, making everybody crazy, but then flies back around again and sees them. They all jump up-and-down and cheer. They are finally back at home and exhausted. Will be hasn’t wasted any time researching Happy’s crazy past! He even found a video of her dancing to a Portuguese song with hot pink hair. She comes in to see the team watching her video. She explains that money was tight. Toby just wants to know if she has the flamingo dress still! They take off. Walter and Paige also get some time alone.