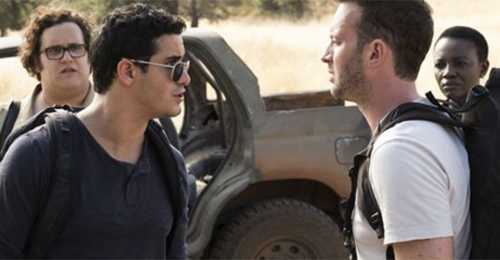 Tonight on CBS their hit drama/comedy Scorpion airs with an all-new Monday, October 16, 2017, season 4 episode 3 and we have your Scorpion recap below!  On tonight’s Scorpion season 4 episode 4 “A simple accident while decommissioning an old nuclear missile causes Team Scorpion to be exposed to the toxic vapor. But they must endure it to prevent the nuke from detonating. Meanwhile, Paige confronts Happy about constantly tagging along with her and Walter.”

Toby, Sly and Cabe interview lawyers to help Cabe with the charges filed against him after Collins managed to escape. They can’t afford anyone good. Sly’s intern comes in. She wants to see him in her office. Meanwhile, Paige, Happy, Ralph and Walter arrive. They went to Churro Fest but didn’t bring anything back. They can’t afford it. P

Paige heads to the other room with Walter. She brings up the fact that Happy has been spending a lot of time with them lately. She is the third wheel. Paige wants to be alone with Walter. Paige tells Happy, who takes offense. They head out to their new job.

They arrive to find a large building that houses missiles protected by some low ranking military men. Their job is to make 3D printed copies of the equipment. They start the job with Happy getting digs at Paige when she can. While making a crack, she drops a wrench and punches a hole in a fuel tank that could make the warhead blow.

Happy tries to get the other’s attention but Toby is showing the young military men that work there who the Commodores are by dancing to the music. Paige and Cabe are laughing at him. They notice that Happy, Walt, and Sly are all waving furiously for help at the camera.

Now they need to stop the fuel leak. Help is 4 hours away. They will need suits and a plan. They suit up Sly so that he can go into the area and eyeball a measurement for the puncture so that they can plug it. Toby, Cabe and Happy head to a local party place to get the gas they need. Happy is ranting about Paige while she drives. She wishes she never met her.

The team reconvenes to get the plug in place. Paige and Walter suit up and head to the location. It becomes too gassy in there so Walt sends Paige out. While trying to finish up he falls and hits his head. He falls unconscious to the bottom of the silo. Paige and Happy suit up and rescue him.

When they think they are all safe again, the puncture enlarges. Fuel begins pouring out faster!

Scorpion must think fast now that the pressure has risen. Walt comes up with a crazy idea. They need to disarm the warhead and siphon 1512 gallons of fuel out. This way they can blast the missile off with little damage done to the surrounding area. The land is wide open and unoccupied for 30 miles around them.

They get to work. Sly does the calculations while Paige and Happy team up. They have a heart to heart while siphoning fuel. They come to an understanding.

Sly freaks out. They don’t know where the nuke went. It never blew because it has a timer on it. They check by the camera. They find it. They race to the area. Happy has seconds to disarm it. Sly calls out a countdown. When it hits 1, they all duck. Nothing happens. Happy did it just in time.

Sly takes off to meet Penny for the Alderman meeting to save the science club. He shows up with seconds to go. He gives his pitch. He can save the city $250k a year by changing the light posts. They grant him the $6k the club needs to stay alive. Sly has an epiphany. He heads back to the warehouse.

Sly tells the team that he wants to be Cabe’s lawyer. They got this. He will scan every book there is. He cares and so does the team. Cabe agrees.

Toby talks to Happy. He thinks he knows why she wants to spend time with the 3 of them. They are the nuclear family she never had. She tells Toby she wants a baby. Toby is thrilled. She wants one soon. Meanwhile, Walter admits to Paige that he is nervous to be alone with her. He doesn’t want to bore her. She tells him not to worry. She has known him forever. She has a plan.

They head out to a special restaurant that serves you elegant meals in the dark. The experience is said to increase your taste buds! Walter thinks it is ridiculous, he tells her as the lights go out. Waving his arms around while he goes on a rant, he hits a waitress with her tray. The lights go on. They are covered with food. They both begin to laugh. Paige tells him she can never get bored of him!