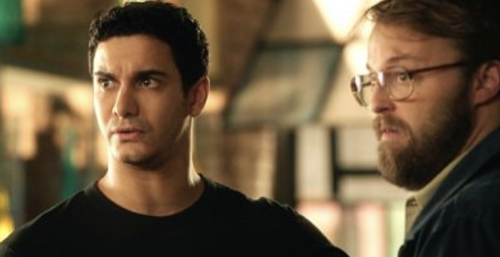 Tonight on CBS their hit drama/comedy Scorpion airs with an all-new Monday, October 2, 2017, season 4 episode 2 and we have your Scorpion recap below!  On tonight’s Scorpion season 4 episode 2 “More Extinction,” as per the CBS synopsis,  “Team Scorpion continues to work with their nemesis, Mark Collins, to prevent an extinction event that could end humanity. Meanwhile, Cabe’s last-minute decision on the case leads to the possible end of his career.”

Team Scorpion is still working on their methane gas issue in the arctic that could cause a mass extinction. Walter calls in to the government, who tells him that they don’t have the money or the resources to help. He hangs up. They have their own plan. A Russian helicopter flies overhead. Walter has an idea. The team all gets on board. They plan to steal the helicopter! It is the tool they need to stop the leak. Happy has her pilot license. She’ll drive. The rest of the gang has to pilfer all of the chemicals they need. They get to work.

Happy and Collins arrive at a Russian hotel where they pose as husband and wife. Collins tazes the man at the front desk, Happy tapes his mouth and they drag him into the back room. The others appear from around the corner. They check the computer for the pilots schedule and figure out where to go into the hotel to get the supplies they need.

Walter and Paige work extracting silver nitrate from the ceiling mirrors in the workout room while a dozen women work out unknowingly below. They scrape while talking about music. Meanwhile, Cabe and Collins pose as spa workers to a man who asks for a wax! Cabe hesitantly applies the wax. Happy, Sly and Toby need water. Toby decides he is going to go swimming in the hotel pool in a pair of Speedos and pretend to pee to clear everyone out. In the pool, a dark blue cloud forms around him. He tells everyone he had an accident. They all swim away disgusted.

Cabe and Collins wrap a rich man in a full body mask that hardens. When he tries to break free, he can’t. They tell him that he will tell his pilot he isn’t leaving for a long time. Happy takes off to hijack the chopper. She creeps out to the roof. The pilot gets out. She runs around the corner and jumps in. Everything is in a foreign language. She pushes a button, accidentally shooting off a missile that flies off to Norway.

Paige and Walter have caught the attention of the guards who are now chasing them. The gang has to scramble. Talking by headsets, they all get their things and run for it. Collins hurts his ankle trying to lift in a hurry. Cabe has to push him on a cart. Happy finally gets the helicopter going. Sly gets in. The others are trying to make their way there. Toby jumps in. Men start shooting at them. They fly off, leaving Walter, Paige, Cabe and Collins behind. Paige and Walter come face to face with a man with a gun. Paige kicks him where it counts and they run for it.

Happy hits an air pocket, sending Sly flying. Cabe and Collins make it to a car. Walter and Paige are right behind them after they steal a car. They take off fast as men shoot at them. Cabe and Collins make it to their spot. They need to run to the launch spot. Collins drops to the ground. His ankle is in too much pain. Cabe is forced to leave him 20 or so feet behind, too far away for his comfort zone. Sly drops the 1st rocket. Cabe is ready to fire his missile when Collins stands up. He is on the move. He faked his ankle injury. Walter tells Cabe to keep going. They will get him after. After firing their missiles, the team puts a stop to the methane leak.