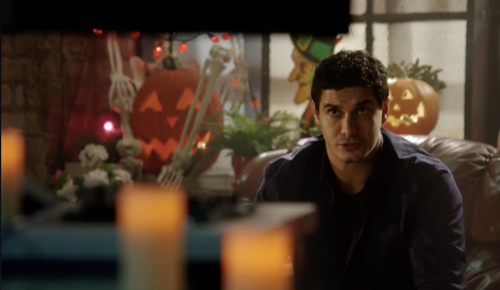 Tonight on CBS their hit drama/comedy Scorpion airs with an all-new Monday, October 30, 2017, season 4 episode 5 and we have your Scorpion recap below!  On tonight’s Scorpion season 4 episode 6 “Queen Scary,” as per the CBS synopsis, “Team Scorpion takes a case on Halloween to prove the existence of ghosts on the Queen Mary, but find an all-too-real disaster when they locate a “ghost ship” on a deadly collision course. Meanwhile, Walter considers taking note of Paige’s interests to benefit their relationship.”

Paige and Walt are listening to her friend sing at a café. Paige asks Walt a question. He doesn’t respond. He is listening to a science podcast with an earbud. Paige is annoyed.

The next day at the warehouse, Sly and Toby debate monsters. Cabe comes in. He wants to know about jury selection. Happy is working on an invention to try and dig Scorpion out of debt. Their latest client Dave comes in. His job for the team – he needs them to approve or disprove the existence of ghosts. Walt thinks this is all a joke, but they need the money. Toby is on board once he finds out it is $20k for one night of work.

Walt stays behind at the warehouse while the others set-up with Dave on the ship Queen Mary that has heavy paranormal activity recently. Paige is annoyed. Walt talks to the team while lying on the couch. He debates with them over the existence of ghosts.

It’s night, the team begins their investigation. They head to the salon of the ship. Sly is shaken by Paige’s phone ringing. It’s Walt – he wants to apologize to Paige. Sly gets a string EMF reading. They move closer to the fireplace. They look up. Blood is dripping from the ceiling. Sly freaks. Walt tells them to move out.

The next morning, the team heads to the top of the ship where they see rust dripping down from a smokestack. That explains the blood. The ship’s crew comes up. They get to talking and realize they have a bigger problem – another ship carrying natural gas whose electrical systems have gone haywire. Happy tries to fix the situation but she can’t get the boiler running.

After trying a few more things, Happy manages to get it up and running. Walt is able to redirect the tanker ship remotely. Seconds later, the antenna goes again. The ship redirects toward Florida where it will hit a refinery and explode. The team has no idea what to do next while Dave chases them around. He thinks the tanker could be a ghost tanker.

They have 25 minutes to turn this tanker around. Paige wants to launch something in the pipeline to sink the ship and not explode it to knock it off its path. They are all surprised. Walt gets off the coach and comes running to the team to help. They get to work. Walt wants to know how Paige figured out this solution. She has been listening to science podcasts for Walt. He is surprised. Sly gives them the go-ahead to launch the barrel into the pipeline. His signal comes a bit late because he is arguing with Dave over whether or not ghosts exist. They missed the ship. Now, what are they going to do?

They need to get on the ship and hardwire it to shut it down. Sly must use his jury selection training to find someone to let him take their boat. Sly finds someone. Cabe and Walt get on board and race to the tanker. Walt jumps on board. He can’t get into the door. It is slamming open extremely fast. He listens to the pattern and finally jumps through. Toby tries to gain control but the ship doesn’t slow down. They come up with a genius plan to slow the tanker down with music.

Dave apologizes for almost killing people because of his belief in ghosts. The team heads back to the warehouse where they watch snippets of their time on the ship. They all look horrified. They get ready to trick or treat. Toby takes a moment to talk to Cabe about his obsession over helping Happy’s pet ferret live better. They have had him for 3 years and he never cared. Toby asks him if it has something to do with his legal problems. Cabe will talk for 5 minutes about what he has been holding in and that’s it.

Walt tells Paige that he downloaded her friend’s CD. He too is going to try.

Toby and Cabe sit in Toby’s office. Toby just wants to listen to what he has to say about his upcoming trial. Cabe tells him he is worried.