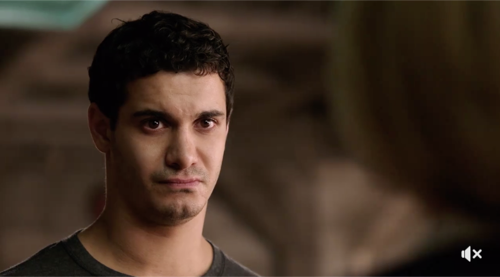 Tonight on CBS their hit drama/comedy Scorpion airs with an all-new Monday, November 20, 2017, season 4 episode 9 and we have your Scorpion recap below!  On tonight’s Scorpion season 4 episode 9 “It’s Raining Men (of War),” as per the CBS synopsis, “On Thanksgiving, Team Scorpion’s new neighbor, Florence, joins them at sea on a mission to destroy a floating island of trash, but her flawed contribution leaves her, Walter and Happy stranded on the quickly dissolving island. Also, Toby works with Cabe to uncover the details of his father’s death that he has suppressed since he was a boy.”

Cabe recalls back to 1967, the night he was told his father died. He was only 9. He was blessed. His dad was a hero, he tells Toby. Two men knocked on their door to tell them about his dad while he watched TV and his mom made popcorn while mopping the floor. The bell rings. Times up, Cabe tells Toby. Their session is over. Toby is glad to see him. Cabe hasn’t been around much.

Walt, Paige and Happy prep for Thanksgiving. Paige is offering baby names. No, Happy isn’t pregnant yet, she tells Walt. Toby thinks it is a good idea to have a strong name for their future baby. Sly comes running in. He has been waiting for a delivery, his book, Chair of Blades. Toby makes fun of Sly for his book. Cane interjects. He loves those books. Florence comes storming in with Ralph. He was climbing through her vents. He explains that he was in there because his worms developed into moths. He wanted to get them before they entered her lab. On her way out, Florence sees the team’s dry erase board. Happy explains that they are working on a job cleaning trash from the ocean for NOAA. Florence tells them that their plan to use worms is flawed. She invites herself along on the job for 1/6 of the cut. Paige talks Walt into agreeing.

On the ocean, Happy fires the agent out onto the trash. Back at the warehouse, Cabe peels potatoes with Toby for Thanksgiving.

Walt, Florence and Happy sprinkle the worms on the trash island while Paige and Sly drift in the boat. They call Paige after they finish. She tries to start the boat. It won’t turn over. Happy looks out into the ocean. There are hundreds of man of wars flocking to the binding agent they shot onto the trash and into the wire. They have 90 minutes to get off the floating trash and into the boat before they are stung to death. Sly shoots a harpoon with a rope attached to the island. Flo crosses and makes it. Happy goes next. The harpoon begins to dislodge from the island of trash. She goes back to Walt, the boat is too far. The harpoon snaps out and back at the boat, puncturing the hull.

Toby and Cabe are making popcorn. The popping startles Cabe. They hear a noise. It is Sly. He has radioed them for help. Meanwhile, Paige shoots Sly’s protein shake to Walt and Happy so they can use it to slather all over themselves to deter the jellyfish. Flo cooks up a polymer to try and seal the boat. Her and Paige start fighting. She has insulted Scorpion and Paige won’t have it.

The shake is starting to wear off. Walt and Happy are starting to get stung. A wave comes. Flo falls overboard. She gets stung repeatedly until Walt van get to her. They get her back on the boat. Toby instructs them to douse her with vinegar. She is unconscious.

Cabe has a friend who can pick them up in a chopper ways away. To get out of the area, Sly and Walt dump gasoline into the ocean and light it up to scare off the jellyfish. Their only hope – they don’t blow themselves and the boat.

It works! Happy starts the boat while Paige comforts Florence. That night, Walt takes the call that Flo is all right. Happy cooks dinner for Thanksgiving. Toby and Cabe are in the trailer talk. Toby digs deeper. Cabe begins to remember. He doesn’t want too, but he remembers being at the bodega with his dad when a man was robbing the place.

The man shot his dad. Cabe recalls freezing. He saw the man with the gun but didn’t tell his dad in time. Toby comforts him. He was 9. It is not his fault. Cabe cries. Why is all of this stuff coming up now, Cabe asks. Toby has an idea – he feels guilty about possibly leaving them. Toby reassures him that it isn’t his fault.

The gang all sit down together for dinner with Flo. Walt suggests Cabe take the head of the table. Cabe gives them a quick speech. He is grateful to have all of them.