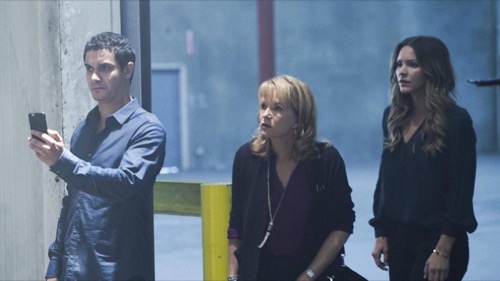 Tonight on CBS their hit drama/comedy Scorpion airs with an all-new Monday, January 16, 2017, episode and we have your Scorpion recap below!  On tonight’s Scorpion season 3 episode 13 Winter Premiere as per the CBS synopsis, “The team is tricked into producing counterfeit money for a foreign entity that’s seeking to run the U.S. economy, leading Paige (Katharine McPhee) to turn to her mother’s grifting skills to bail them out.”

It’s 1992 and little Paige has lost her family on a hike. She asks a stranger for help. Meanwhile, Paige’s mother is going through the women’s car and her wallet for cash.

Back at the warehouse, Sly is practicing his debate skills with the team as they ask random question. Veronica, Paige’s mom, shows up. Toby asks her if she’s been on the run. Veronica knows that Paige is going to be mad at her for leaving. She had a good opportunity.

Walter gets everybody’s attention by blowing into a conch shell. In the wake of Tim’s recent departure, he has realized everybody hasn’t talked about their feelings. Veronica takes the shell to talk. Walter cuts her off. The client, who owns a winery, has arrived and she looks testy. She has cars waiting for the entire team to leave.

They all get into the limo with Paige arriving last. She sees her mother wants to know why she’s there. They all start drinking and realize that they’re being drugged. Walter starts to panic will slide tries to figure out ways to get out of the limo. They come up with a plan to pop all the champagne bottles to blow out the windows, but it’s too late. All of them have passed out. The

They wake up in a building on the ground all side-by-side.All the signs in the building or in Spanish. The electrical outlets are not made in the US. Walters finds a printing press with sheets of $100 bills. Page thinks that Veronica has something to do with it their team never gets kidnapped.

The client comes in and welcomes them to a foreign country.

The US has denied them dollars so they want the team to finish the counterfeiting job after a professor they kidnapped failed to do a good job. Veronica pipes in. They don’t have the right equipment or chemicals. She knows a thing or two about counterfeiting, she served time for it.

Meanwhile, Toby and Happy are at the winery. Toby is testing all the wine while Happy is worried about the team. Veronica helps Paige get the water baths ready. Paige questions Veronica about her whereabouts. Veronica thinks she knows a way out. She needs to get a message to Walter. She swears she heard a car in the distance. She writes a message on a tray that is taken to Walter in a different room. Sly, Cabe and Walter read the message.

At the winery, Happy can tell someone is tailing them. She makes Toby walk down a different path. A man with a gun runs up to them. They run and jump in the car.

The guys get to work drilling through the wall. Cabe sees daylight. They chisel a large hole. They make it out into the woods and run. They hear dogs chasing them. Toby and Happy are also being chased in their car. Toby lights a barrel on fire in the back of the truck and throws it in front of the other car.

The guys work to get the dogs off their trail. Paige and Veronica realize the press isn’t running anymore. Veronica gets angry that the team couldn’t be more creative. Veronica drops to the ground. Her heart. Paige calls the guards.

Toby and Happy stop the truck to see who the guy was that was following them. They zip tie his hands while Toby looks through the truck. While Veronica is on the ground she manages to get a key card to all the rooms. Up in the trees, the guys make a whistle to call the dogs off. Veronica and Paige leave the room and look around. They head to go and turn the printer on the buy more time.

The guys make their way out of the tree and through the woods to see a bar, a USA bar?! They head into the bar and use somebody’s cell phone to call Walter and Happy. Cabe makes a connection with the guy who owns the barn they were both in the military at the same time he let’s him take his gun.

The guys get into a truck head to the warehouse, driving and shooting to save Paige and Veronica. They manage to find the girls but the tires of the truck are shot out. They get into the limousine. They need to find Lucinda and the 5 million in counterfeit bills.

They arrive at a new warehouse where they don’t find her but stacks of money. Lucinda has mixed counterfeit cash with real cash so that she can make the economy fall. She has a personal vendetta against the US. Suddenly the doors of the warehouse close and lock. It’s Lucinda and she is trapping them inside and piping gas in to try and kill them!

The doors are made of steel they can’t shoot them open. They talk to Toby and happy on the phone to try and get help remotely – they determine that fire would burn out the gas. Walter sets the flame runs into the vault where the team is hiding. It causes an explosion! Lucinda and her people will be charged.

Back at the warehouse, Happy and Toby talk about where they’re going to get married. Toby confesses to her that he is broke and Happy is too. They don’t care where they get married as long as they have the wedding.

Paige brings Ralph to see Veronica. Sly interrupts, he needs Paige to intervene Walter is acting off the wall. The team catches a news briefing. The team is on there and Veronica is in trouble the whole world is going to know where she is now.