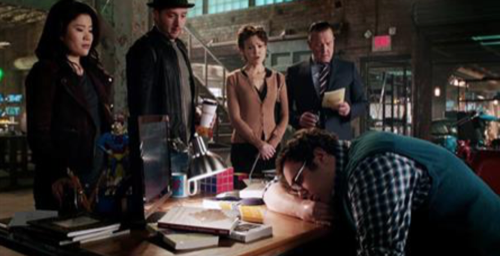 Tonight on CBS their hit drama/comedy Scorpion airs with an all-new Monday, February 20, 2017, episode and we have your Scorpion recap below!  On tonight’s Scorpion season 3 episode 17 as per the CBS synopsis, “The team must save Happy, (Jadyn Wong) Sylvester (Ari Stidham) and Cabe (Robert Patrick) from their own fear-based hallucinations after a mission to protect a vital seed bank goes awry.”

At the warehouse, Sly is fast asleep on his desk. He was up all night prepping for his debate. The team wakes him up. Cabe tells him he needs to pull it together. Toby gets him tea. Paige and Walter arrive. They have desserts. Cabe has an idea – Sly needs to make an appearance at a petting zoo. He doesn’t want to go – he is afraid of chickens. Walter shares that he needs to get rid of his fear and be rational.

A new case comes in – the world’s seed trust is malfunctioning. Scorpion needs to leave immediately to Greenland to deal with what could turn into a catastrophe. They arrive to a facility with no power while a blizzard rages outside. They pry open the doors to darkness. Happy fixes the problem and gets the lights back on.

Back at the warehouse, Toby is discussing history with Ralph in celebration of Presidents Day. Toby and Ralph talk about fears and Walter. Ralph wants his mom and Walter to get together. Toby warns him that might not happen. They may be better off as friends. Ralph is sad, until Toby offers him the Froyo in the freezer.

The team work in separate rooms to figure out the problem. Sly has figured out what caused the surge – the time is off. The operating systems clock is behind by 51 seconds. Sly is spooked out by the darkness. He feels like eyes are on him. The team reassures him it is nothing. The door shuts, sending Sly into a panic. The others think it has something to do with the clock. Suddenly, Sly is screaming. He yells for help as a mysterious thing comes at him. The team tries to get in as Sly screams, but the doors won’t open. Sly calms down as he radios the others – he is with chickens.

Toby tunes in via video feed. Sly is not with chickens. He is having a psychotic break. Toby asks how everyone else feels. After seeing Happy near some yellow dust, Toby freaks – they are breathing in dangerous fungus that will make them hallucinate. They will live their worst fears. Paige and Walter didn’t come in contact, but Cabe, Sly and Happy did.

Happy begins relieving the days of her youth when she was in school. Cabe thinks he has arthritis. He is with his ex-wife. She just made dinner. Toby needs to help them get through their fears and make them realize it isn’t real. Toby warns Paige and Walter that they all could fall into a coma and died unless they get all 3 of them out of there in the next 30 minutes.

Paige radios to Sly. She tries to talk him through his task. Walter works to get Cabe focused, but that proves difficult. Cabe is hallucinating that he is on a game show. Toby tries to talk to Happy, but she is still hallucinating about her days as an orphan when she was rejected for adoption. Happy current fear shines through – she is afraid that Toby is going to leave her like everyone else. Toby figures out that they all have to get back to the root of the problem. The 3 of them work to rework the original trauma of Happy, Cabe and Sly.

Toby gets through to Happy by making her realize that there is nothing wrong with her. After he works through her issues, he gets her to restore the generator. Paige is up next, she tries her hardest to reason and help Sly see reality – to fight through the hallucination. After some creaming like a girl, he pulls a lever, accomplishing his job, but then he begins to get sleepy. A dangerous side effect.

Walter works to get Cabe back. Cabe is scared of getting old. Why? Walter figures it out. Cabe fears being weak, a part of getting old. He is a military man who sees being strong as a very important factor. Walter tries to reason with him, to make him realize that as he gets old he gets wiser, more experienced. Cabe does his part, he flips the breaking switch. But quickly nods off too. They are all in comas from breathing in the dangerous spores.

They need immediate care and a hospital is 2 hours away. They decide that they need to find seeds that will help them. How do they get the seeds with spores in the air? Walter hacks the system and instructs Paige to grab some PVC pipes for snorkels. The two of them find their way safely to the seed bank. Ralph tells them where to find the seeds. Toby instructs them. They need to grind seeds into powder and make them into an oil that will help get the 3 out of their comatose state. A fire starts. They have a new problem. Walter builds a fire extinguisher while Paige heads off to give them all the oil, to bring them to.

Toby loses Walter via video feed. Paige goes to see if he is okay. She sees him kissing a girl in a moment of hallucination. The real Walter runs from around the corner. Paige wants to get out of there quick. She must have breathed in some of the spores. They all get out safe.

Sly makes it to his debate. He kicks ass after he is called a chicken by his opponent. Cabe tells his lady friend the truth – he hates vegan, he needs reading glasses and he really likes her. She reassures him that he fits right in her wheelhouse.

Paige asks Walter if those spores really do make you see your worst fears. It does. That gives her plenty to think about. Meanwhile, Toby managed to change Happy’s fears of being alone.