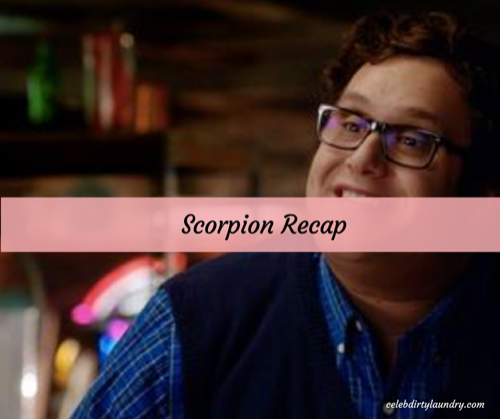 Tonight on CBS their hit drama/comedy Scorpion airs with an all-new Monday, March 13, 2017, episode and we have your Scorpion recap below!  On tonight’s Scorpion season 3 episode 19 as per the CBS synopsis, “The team search for an endangered monkey hiding in the Amazon in hopes of uncovering a cure for a dangerous virus. Meanwhile, Happy and Toby meet with a counselor to prepare for their marriage.”

Happy has brought Toby to a marital counselor. He isn’t keen on it, but she wants to learn how to express herself better. The counselor gives them a test. It’s Toby who is the problem. He has put Happy on a pedestal. He gives them a bicker clicker.

Sly is working on his hydroponic greenhouse he has named after Tim. Toby and Happy come in. Sly is going to test his tomatoes/bread issues. The tomatoes never cover all of the bread. So Sly grew tomatoes in a box. Ralph and Paige come in. They are discussing him getting a haircut, a new style. The gang all gets in on it using the iPad to test out virtual looks. Paige is sad her genius cares about his hair. Cabe gets a call, a new client is on her way in.

Their new job is to locate a gene in a rare monkey that it is not affected by a virus that is destroying the Amazon. Sly is scared. He doesn’t like creepy crawlies or monkeys! Happy tells him he can stay behind to run tests. He thanks her.

In Rhondon, the team preps to start their trip. They are interrupted by a truck with a local who was shot. He had the monkey until he was injured. Now it is on the loose and the team must find it. Sly locates the possibility of the monkeys location by satellite and gives the 2 coordinates to the team, who split up to hunt. While talking to the team, Sly is bit by a caterpillar in his greenhouse.

Walter and Paige’s coordinates bring them to a wasp nest. Cabe, Happy and Toby see a monkey head into a tent. Walter fling the nest at a set of guards near the tent. They run. The team tries to get the monkey in the tent who is jumping around. The monkey lands on Toby’s head. Happy throws a bag over it. Toby runs into the tent pole head on. The monkey takes off.

The team is back to square 1. The local who is with them showing them where to go is suddenly feeling ill. He might have the virus. The monkey is in the middle of a mating ritual. The gang elects Toby to rub himself down with the scent of a flower, dance in a circle and give the monkey the eyes! It works. They swab the monkey. The local falls over, passing out. They discover seconds later that the monkey isn’t the cure.

Sly uploads the results to Walter. Why are the monkeys immune then? Toby thinks they need to test the monkey’s poo. Ralph is still trying to locate the caterpillar. The monkeys eat from the von von tree, a rare tree located in the rainforest. They need to get to it fast. The local is now delirious from a fever. If they can get into the lookout tower they should be able to spot one but they need to get up there without the local soldiers spotting them. They create launcher out of a hollow log with vines and a hook from a backpack. Meanwhile, Toby and Paige create a cure with the little seeds they have from the monkey. Cabe climbs up and attaches a make shift detector. They find the tree.

They get to the tree. The fruit with the seeds is extremely high up. Cabe and Toby run to the tent to steal tools. A soldier comes around. Cabe has him at gun point. Toby tries to grab a rope and lets a stack of wood poles go. The man punches Cabe and goes after Toby. He has him on a sheet of plywood with a table saw running right near his head. The monkey comes out of nowhere and jumps on the man’s head. Cabe gets up and knocks the man out. They run back to the team with tools.

They hit the tree and a massive amount of spiders come crawling down. They get the fruit and run back to Paige with the local. They get some of the juice and get it under his tongue. His heartbeat begins to regulate. He is safe,

Happy and Toby go back to the therapist. Toby had 130 clicks. They are mad, but the therapist points out that they still want to get married so they passed the test.

Back at the warehouse, Ralph and Paige come in. He has a new haircut and looking good. He’s ready to work in his lab with his face seal. Paige kisses him. He is still the same.

Cabe is headed home. The team senses that he is still sad about his break-up with Allie. Walter tells Paige he is going to ask him to hang out. He can tell Cabe is hurting inside. Paige offers to do it. Toby points out to Paige that Walter is feeling empathy. Paige discovers for the first time how much Walter liked her when she was with Tim. After all, he empathizes with Cabe.