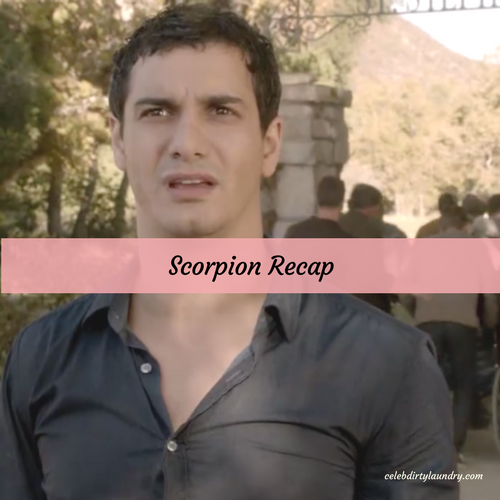 Tonight on CBS their hit drama/comedy Scorpion airs with an all-new Monday, April 10, 2017, episode and we have your Scorpion recap below!  On tonight’s Scorpion season 3 episode 21 as per the CBS synopsis, “The team must defy the orders of a foreign government after they retrieve an asteroid from space containing DNA strands that could have deadly consequences once exposed.”

Toby and Happy are enjoying some complimentary spa time while Paige works on their wedding. Toby is thrilled over their gift bags. Happy and Toby show up at the warehouse pretending to have a horrible morning. The team reports all of their work on the wedding. Walter has enrolled them in courses to prepare them for their future, finances and wedding spats. Toby tells Paige that she needs to reign Walter in. Their next project comes in, they need to save a meteor before it crashes. It is rich in palladium. They brainstorm how they would tackle saving a meteor in its natural state as it speeds towards earth.

The team works together while the officials watch. Happy’s remote control loses signal to the helicopter that is supposed to catches the meteor in midair with a coupler. She changes the batteries before the helicopter veers off course and explodes in the city’s capitol, killing hundreds. The officials are relieved. Paige calls Cabe. The team is on their way home. Cabe has been working on the wedding. Allie shows up at the warehouse. Her candidate was taking bribes. It looks like he will have to resign which puts Sly in office.

Toby sees the meteor, it doesn’t look right. He runs a test. The meteor contains deadly pathogens. Toby tries to tell the Chechnya officials about the pathogens. The president tells them that he will tell the nation. He sends the team on their way. They think he is lying. They want to head back to stop them. Their vehicle is stopped. One of the president’s men pulls them out. The president wants them to secretly return to the hanger. The man shoots their badges and then calls in their deaths to the officials. He doesn’t want the military to know they are alive. He and the president want them to secretly work on the meteor. They call Cabe. Allie offers to help assist them with some chemistry. The team preps a plan and get their materials together to do the job.

Walter and Happy arrive in a tunnel, outside the walls of the meteor. Sly spots two scientists making their way towards where Happy and Walter are located. He radios to them to hide.

Happy cuts a whole in the wall and places a makeshift gun in the whole that shoots a flame. Walter keeps watch. The heat sensor in the tunnel goes off. A turbine kicks on. Walter holds the whole in the wall while Happy holds on to him. The wind is fierce.

Sly tries to shut it down remotely. Sly closes the baffles at the end of the tunnel just in time. Walter loses his grip and goes flying along with Happy. The turbine is still going strong. Happy stabs at the floor with her nail files from the spa to crawl her way back up the tunnel. She gets the blow torch back in the hole. Toby and Paige open the door to the tunnel. He rubs a cold soda on the sensor, shutting down the turbine. They test quickly as the officials on the other side of the wall hold a ceremony.

As part of the ceremony, they open the meteor’s case. It’s ash. They know! The gig is up. Walter calls the president. He tells them to run. He and his man will hide. The team doesn’t want to see the president die. They head back. Held with guns to their back, Sly talks for the team, telling the military that they can make a deal. He won’t tell the US to shut them down and he can make them rich.

Sly brokers a deal. He will license them their technology, they can continue space harvesting in an 80/20 deal with the US. Cabe confirms via iPad that the deal is real. They want to talk to the president who must remain safe and unharmed. They agree.

Cabe shares a drink with Allie. He tells her that the team is thankful. The team arrives home hours later. Cabe is sleeping in the chair. He wakes. He offers Sly the chair after Allie’s candidate lost his spot. Sly will take it if Cabe asks Allie to dinner. It’s a deal!

Paige brokers her own deal. She wants some coupons for the spa. Toby hands them over. He and Happy run off to the spa. Walter tells Paige he cancelled all of marriage classes. Instead, he set them up with dance lessons and managed to create a great song that best portrays Toby and Happy. Paige and Walter dance to the song.