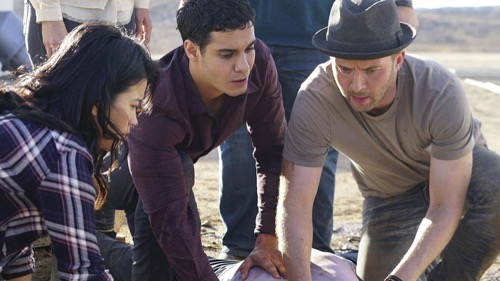 Tonight on CBS their hit drama/comedy Scorpion airs with an all-new Monday, January 2, 2017, episode and we have your Scorpion recap below!  On tonight’s Scorpion season 3 episode 12 Winter Premiere as per the CBS synopsis, “The team must freeze Cabe’s (Robert Patrick) body in order to save his life after he’s seriously wounded by exploding shrapnel while on a mission in the desert.”

Cabe comes in to the warehouse, announcing how hot it is, but the team is busy playing a game. Cabe wants to know why they aren’t working on their latest job. Tim is back to the Middle East so the gang is upset over the donut selection. Paige comes in after dropping Tim at the airport. She isn’t happy. Walter tries to talk to her but she is short with him. She wants to focus on work. Walter is glad that Scorpion is back to the regular roster, something that angers Paige. Paige thinks that Walter forced Tim out so they aren’t not back to normal as far as she is concerned.

Cabe’s house is back to normal and he can return. Happy seems sad to let him go. Cabe gives her a little token of his mother’s for her to wear on his wedding day – she loves it.

On to the latest job at the Federal Pumping Station in Redwood, California. Cabe tells Walter that Paige i extremely quiet on the ride – he knows. The team needs to run a full diagnostic of the turbine wind operation. Its covered in copper, causing it to run hot. While examining the turbine, it begins to run fast. A piece snaps off. Everyone looks to see where it went – it hits Cabe and he begins to gush blood from his stomach before keeling over!

They carry him outside of the turbine station and lay him on the ground. Toby sticks his fingers into Cabe to pull out the shrapnel. Sly is freaking out while Paige is equally grossed out. The shrapnel hit a major artery. Toby uses a clip to stop the flow. The team needs to get ot of there but their trip will take to long.

Forget the job, they need to help Cabe. Walter wants to slow down the blood from pumping. They need suspended animation as Cabe is beginning to shake. Happy wants to create an ice bath and slow everything down. They need to make sure he doesn’t bleed out. The team gets to work – each contributing with their own specialty to save Cabe’s life.

Using a tool chest from the bed of their truck they drop Cabe in a cold bath as Happy creates a cooling process with the help of a hose, a bucket and the truck. Toby warns Cabe that his heart is going to stop during the process but he knows he is tough. Cabe tells them all to do it – he trusts them all. They all say their goodbyes, just in case.

The team gets the water bath to the right temperature before Toby shoots Cabe in the heart with a syringe. The truck’s engine shuts down. Happy can’t get it started again.

Happy has an idea – she is going to make a hose. Her and Toby are terrified but they need to give it a shot. It worked! Meanwhile, Sly is trying to secure a rattle snake while Paige and Walter look for the hot springs for sulfate. Paige is upset that Walter said goodbye the way he did.

Toby checks Cabe, he is at the right temperature. He gets Happy to help super glue Cabe’s artery. She freaks out when the two of them stick their hands into Cabe’s body cavity, but it’s the only way to save him.

Meanwhile, Walter and Paige find the springs…the naked springs. Desperate, Paige gets rid of her clothes to get in and collect the sulfate they need to save Cabe’s life. Cabe is started to warm up but Toby hasn’t thinned his blood yet. Just in time, Sly comes running in with the rattle snake that they force to bite Cabe.

Walter and Paige are in the springs, naked, trying to collect the sulfate that smells like rotten eggs. They get what they need and race back to the gang who has Cabe on a fire now. They pump Cabe full of the sulfate, but his temperature raises too quickly. They pull him from the makeshift bath and begin trying to get his heart to pump.

Desperate, they put him in the bath while happy throws a fan in, giving him a shock to restart his heart. The chopper shows up. Walter lies and says Cabe is his father to get on board.

At the hospital. Walter finally shares his feelings with Cabe. He tells him he loves him and that he has a hard time expressing his feelings. The rest of the gang comes in. They are wearing Hawaiian shirts and carrying iced coffee. Walter leaves to share his medical data with the doctors. Paige catches up with him. She’s happy to see he isn’t a droid after all.