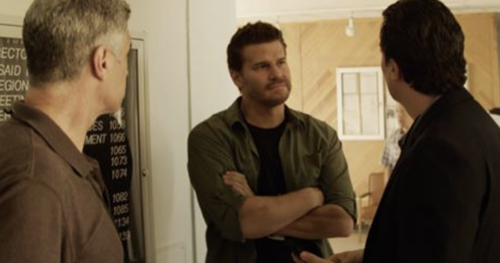 Tonight on CBS their new military drama Seal Team airs with an all-new Wednesday, October 25th, 2017 episode and we have your Seal Team recap below.  On tonight’s Seal Team season 1 episode 5,“Collapse,” as per the CBS synopsis, “Jason and the SEAL team must navigate the contentious evacuation on an embassy in South Sudan when the country becomes increasingly unstable. Meanwhile, Clay and Stella take their relationship to the next level.”

At the American Embassy in Juba, South Sudan there is a party going on after they just pulled off the country’s first presidential election. A reporter questions Richard Crowley (Gabriel Olds), who tells him, off the record, he is about 2 seconds away from banging a hot worker, Hannah Parsons (Ashley Diane Currie); but she manages to sneak out of the embassy. On her way home, Hannah and the Sudan local are stopped at a toll booth, where they are both attacked.

Jason Hayes (David Doreanaz) sits beside Sonny (A.J. Buckley) in the mess hall. He gives Sonny some pictures, explaining he was helping Alana (Michaela McManus) clean out Molly and Nate’s (Daniel Gillies) house. He says it doesn’t make them feel good being in a photo with two dead guys and a dead woman – their interpreter’s wife. Sonny tells Jason it’s time to clean out Nate’s cage and let his secrets be gone with him too. Sonny says it’s time to rip that bandage off.

Clay Spenser (Max Thieriot) sits with Brian (Jay Hayden), commenting on his OCD. Adam (Michael Irby) calls Clay over, saying he has a visitor. Outside, Stella (Alona Tal) claims she was in the neighborhood; she says she is throwing a party this coming weekend and he asks if he can bring Brian. Stella tells Clay it is nice to see him in his element and will see him at the party.

Jason opens Nate’s cage, sits down and finds a note from Nate saying, “so. What are you gonna do? My luck ran out. Far’s this stuff goes, burn it and see ya, Chief.” He finds some passport photos and fake pages; Jason wonders what Nate was doing.

Mandy Ellis (Jessica Pare) informs the SEAL team that Hannah and her driver were murdered outside the US Embassy the previous night. Lt. Commander Eric Blackburn (Judd Lormand) says he wants them to go in and evacuate the embassy, but when the team suggests they send in a couple hundred marines, Blackburn says the parties are objecting because it will look like they have lost control.

While on the plane, Lisa Davis (Toni Trucks) explains the safety features on their vehicles when Blackburn tells them they are diverting to a military airport, where he will work with the marines there, in case they need to get out of Sudan in a hurry. Mandy talks about Doyle and Crowley is the acting Ambassador for now; they worry how the situation can change really quick once they get there.

As the team travels by vehicle, they hear on the news how hostile the situation is. Lawrence Doyle welcomes there and cannot tell them how long they are safe, explaining how new the country is. He thanks Jason for being there, telling him he has a team of 3 and there are 157 Americans scattered across the country and it will take a miracle to get them all out. He wants Crowley to make the evacuation mandatory.

Ray Perry (Neil Brown Jr.) is setting up in the room as the building starts to be surrounded by protestors. Jason tells Crowley he is responsible for everything, he acts cocky about the power. Crowley says they can’t leave every time there is a protest, and he isn’t ready to pull the flag down yet.

He mocks Jason’s position, saying he doesn’t want the people to feel it is dangerous to walk freely in the streets of Juba. He says Jason’s job is to make sure things remain okay, but Jason says they have 5 shooters and they will not be able to stop a civil war. Crowley tries to stop Jason and Doyle from rescuing American teachers, but they leave anyway.

Brian and Clay are leaving to Stella’s party when Brian questions if he knows Stella’s friends; he says he doesn’t as Brian says this is probably a mistake.

The reporter comes to see Ray, asking him if it bothers him coming to a place like this because everyone else who looks like him is on the other side of his gun. Ray orders him to leave. Ray says those big white guys behind him are his brothers too; he says those people outside are going to hate them regardless because they always want someone to blame.

Mandy informs Jason there is no change on the evac order, as they arrive at the school. Sonny tosses a smoke grenade to chase off the rebels, as the team gets into the American school in search of the teachers inside. They find them in the library and Doyle takes them as he tells Jason Crowley has a job for them to evacuate two American aid workers.

At Stella’s party, Clay and Brian are introduced to Evan, who is drunk and calls them snipers. Evan is insulting Stella, berating her for changing her views of the military.

Jason and the team approach a toll, concerned at how friendly they will be. They are ordered to get out for inspection, but Jason says that is not going to happen. The soldier asks him if they want to die there; Jason shows him his gun and says it will tear him apart and whatever else happens he will die. He suggests they give peace a chance, the soldier tells them to lower their weapons and lets them through.

They arrive in the village where they find Erik Wilkinson (Ben Esler), telling him they are there to take him and his wife out of the country. Erik says the country is their home and Samiyya (Unati Mangaliso) and him are not leaving. Erik reveals he told Crowley, they were not leaving and the only reason they are there is on his father’s orders. Erik and Samiyya says Hannah was a dear friend as Sonny offers to hog tie them and remove them from the village.

Back at the Embassy, everyone is ordered to destroy all classified documents. Mandy is furious to learn that Crowley sent them on a bogus mission and now they are a couple hours away and it is almost nightfall; Jason tells her not to worry, they are heading back soon.

Mandy barges into Crowley’s office, demanding him to order the evac, saying he is gambling people’s lives. She also reveals that he sent the best men he had to rescue a major campaign donor’s son. Mandy says if he doesn’t order the evac now, she will find a way to burn him. Crowley informs Mr. Assistant Secretary that the situation has become intangible and he is ordering an evacuation in Juba.

Jason and the team are driving back and see that all the soldiers/guards are dead and there is a group of men ordering them to get out. The team opens fire and killing some of the bandits, plowing through the blockade and evading more gunfire. They attempt to drive down the streets of the city, he dispatches Ray, saying the rebels set up roadblocks and they need his help getting them out of there.

Davis tells Crowley to make an official request, so the ground commander doesn’t get in trouble for violating the string of command. Davis tells him how to get rid of all the computer files as well as paper.

Every street the team drives down, people are yelling for them to go home, they have 50 meters to go but Ray can’t help them because there is too much smoke for a visual. Ray tells Davis they are going to get blocked in, and all they can do is watch as the militia surrounds the vehicle, after several tense moments they are able to get out of the maze.

Brian wakes up Clay, saying they need to go. Brian jokes that his shirt never fails, and he got lucky last night too.

Ray orders Lisa to get to the convoy and he will be right behind her. Brian and Clay are both late, but quickly learn they are going to be jumping day and night for the next little while.

Jason tells Ray they will not make it to the Embassy before the convoy goes and will meet them at the airport; Ray reminds them that will leave them driving blind through the city. As Ray is about to leave the Embassy, he finds the reporter lying on the ground after he was struck in the head with a rock. Davis calls out for Ray, who doesn’t answer, she looks at Mandy who is pulled to a vehicle by another soldier.

Lisa returns and finds Ray wrapping the reporter’s head, she picks up a guy and he tells her to remember it has to be the protestors or them, and it is not going to be them. They come outside to see that the convoy has left without them, Ray tells Lisa they need to get back inside.

Davis contacts Jason, saying Crowley sent the convoy out early and let her and ray inside; Jason says they are coming for them. Jason informs them they are across the street from the Embassy; he tells Davis to get Ray to the control panel and then he has a job for Davis.

Davis is on the roof with the Sudan flag, she takes down the American flag and raises the Sudanese one as everyone cheers. Ray presses a button, allowing all the rebels into the Embassy. It works, and the back gate is clear of rebels, Ray and Davis walk the injured reporter down the ramp and the vehicle arrives just as more rebels come towards the back. They continue to wind through the streets, managing to get to the airport, where Crowley and the Americans sit.

Sonny angrily walks towards Crowley but is pulled away from attacking him. Jason hands him the folded American flag, saying he must have left it behind by accident, and walks away.

Brian tells Clay that he likes Stella and tells him not to screw it up, and Clay promises to try not to. The reporter thanks Ray for saving him and says he was wrong about him.

Clay and his team look up and only see 5 canopies, as the 6th is only a partial; medics are told to standby. Clay watches anxiously, as the recruit cuts away and they look on for reserve deployment, the jumper drops, and the identity of the jumper is still not known. Clay looks on as each jumper removes their mask and he realizes it was Brian.