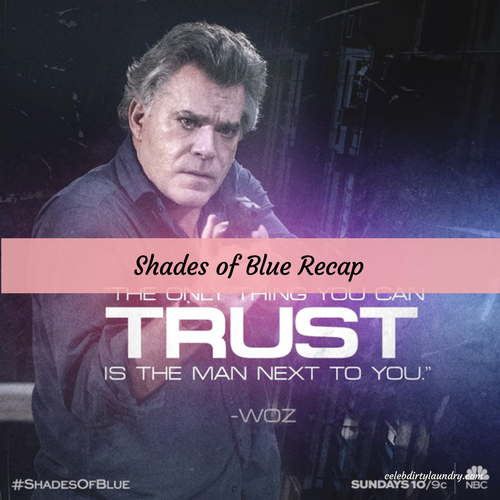 Shades of Blue airs on NBC tonight with an all new Sunday, April 16, season 2 episode 7 called, “Fracture,” and we have your weekly Shades Of Blue recap below. On tonight’s Shades of Blue season 2 episode 7 as per the ABC synopsis, “Following Harlee’s (Jennifer Lopez) brave confession to the entire crew that she has been informing for the FBI, the team grapples with Harlee and Wozniak’s (Ray Liotta) betrayal. With their team falling apart, Harlee and Wozniak come up with a desperate plan to neutralize Bianchi (guest star Ritchie Coster).”

Harlee admitted that she was the “rat”. However, she also failed to tell her crew the entire truth. She had told them that she had gotten picked up after the heist and had gotten made though that wasn’t what really happened. Harlee had actual made a deal with the feds before the heist and had recorded her friends in order to save her own skin. So Harlee had lied in a way that made her come across as a better person than she was and that it in turn had also made Woz look good because she had told the crew that Woz was speaking to the feds to help her and that he was trying to fix the bind that she was in so that no one went to prison.

Though Woz surprisingly hadn’t cared for what Harlee did. He said they were still lying to everyone and that neither of them were as noble as she claimed yet Harlee had of course said that she had a reason for what she did. She said that the truth would have broken them and that the lie would have made things easier. So Woz had been forced to tell Harlee that their crew was already broken. There was mistrust running rampant and everybody had been scared when they heard the feds were looking into them because they didn’t know what would happen next. And therefore, Woz was concerned.

Woz thought Harlee was being a little optimistic about their situation and that they should have come clean about everything. Yet, Harlee still believed they could end everything without either of them getting hurt so she wanted to follow through with their plan. She wanted to hold Vincent Rossi who was Bianchi’s hit-man over the coals and get him to turn on his boss, but Rossi was used to the game and so he didn’t want to talk to anyone with his lawyer and his lawyer simply didn’t want him talking. The lawyer was being paid for by Bianchi and was another one of Bianchi’s henchmen.

So the lawyer just cared about Bianci’s interest which was why he wanted Rossi transferred to prison rather than stay in Woz and Harlee’s hands for too much longer. But Harlee and Woz had decided if they couldn’t flip Rossi that they would make it appear as if Rossi had flipped so they went to Stahl. Stahl had insider’s information on Bianchi that they could use to fake Rossi’s giving them information however to get what they needed from Stahl they had had to convince Stahl that he should to talk to them and that wasn’t the easiest thing to do. He sort of still held a grudge and he had cared about helping them with Bianchi because he still wanted Julia.

Julia was the big fish and Bianchi was simply being used to lure her in. However, Stahl was getting tired of waiting for Harlee and Woz to deliver on handing Julia over. So he had eventually given Harlee what she wanted to know though he had made sure to continue spying on her using the hack he had set up on her laptop. And so Harlee didn’t know that Stahl was watching as she went ahead with her plan for Rossi. Rossi was later framed for being a rat and Bianchi had truly gotten so spooked when NYPD started to show up at much of his illegal dens that he had sent in Julia to fix everything.

Julia had come to an agreement with Woz and Harlee in which they both agreed to handing over Rossi in exchange for peace between them and Bianchi. So Stahl had found out about it by spying on Harlee and he had wanted to interrupt that meeting in order to finally get Julia yet Stahl had made a mistake in his rush to get Julia because he had been spotted near the docks when someone on his team risked flashing their lights too early. And so that tipped off both Woz and Harlee who decided to tell Julia beforehand that she shouldn’t make the meeting. Though they both went ahead to meet Bianchi and they had did come to an agreement.

The detectives had handed over Rossi’s location and they had gotten their members like Tufo and Espada to play along. Yet, Stahl had gotten so upset about missing out in Julia again that he barged into Harlee’s apartment and accused her of double-crossing him. He said that should have told him about Julia and that they could have ended everything if she had just been honest to him about the meeting. So Harlee told him off and had said that he doesn’t know how to do business, but Stahl was tired of waiting for Woz to fulfill his end of the arrangement and he had demanded that Harlee wear a wire to speak to Julia.

So Harlee was again left without little choice and she had gone to Julia wearing a wire however the crew had had bigger problems. Espada had put in transfer papers because he didn’t want to be part of the crew anymore and Tufo had actually handed in his badge because he didn’t know what being a cop meant anymore. And so the team was falling apart right as Bianchi made a move to kill Julia because he thought she had betrayed him.