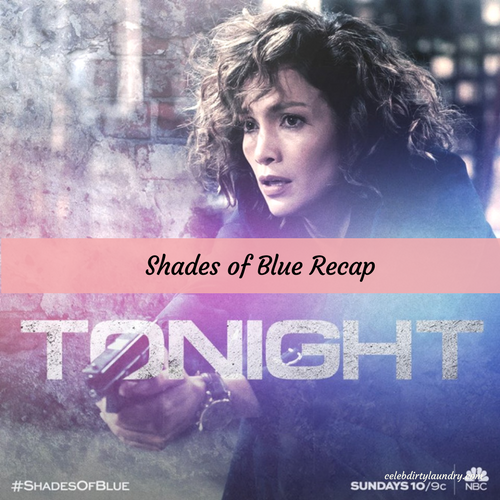 Shades of Blue airs on NBC tonight with an all new Sunday, April 23, season 2 episode 8 called, “Unpaid Debts,” and we have your weekly Shades Of Blue recap below. On tonight’s Shades of Blue season 2 episode 8 as per the ABC synopsis, “Wozniak (Ray Liotta) goes after Bianchi (Ritchie Coster) for breaking their agreement; Harlee tries to unite the team around an illegal mission to repay Tufo’s brother’s debt to a local drug dealer; Stahl makes good on his threat to go after the crew.”

Harlee comes in to speak with the captain. The shooter is dead. Matt is out looking for him right now. Harlee is given a blue shirt. She has blood on hers and she needs to address the media tonight. Or they will be at her door tomorrow. There is no avoiding them.

Marcus runs into the hospital. His brother is in the hospital. He has only been out for 1 day and he’s already in trouble. Marcus makes a call, he needs a favor.

Matt pays a visit to Bianchi’s girl, Tommy. She explains that she doesn’t know where her boyfriend is. He has been good to her. Matt doesn’t care. She needs to smoke. She goes into a box and pulls out a gun, she shoots. Nothing happens. Matt pulled the clip. She talks, he’s in Italy.

The FBI arrests Espada for carrying a bundle of weapons.

Harlee is digging a grave in the dark. She hits the casket. She opens it. She is in it. She wakes scared. She calls Caddy. Her boyfriend comes in. He wants to know what is going on with her. She doesn’t want to talk.

Matt’s son is talking to Tess. He wants to hear about Tess’ story. She starts telling him. Harlee comes in. She doesn’t want to talk. Espada calls Harlee from his cell. Harlee tells Woz what is going on. Woz wants to get a spotter first before they call the crew. Woz tells Harlee and Tess to arrest the dealer. Woz sees his son. He can’t give him an interview right now.

Tess and Harlee arrive outside the apartment of the dealer. They hear a loud noise and come in to see guns raised. They raise there’s. Everyone is on edge. Harlee drops her gun to diffuse the situation. Tess thinks she is crazy. Harlee makes a deal to steal an NYPD car to get their shipment back.

Woz is trying to visit Espada. The agent won’t let him. He tells Woz it is over. Woz either wears a wire and gets the council woman to talk or Espada is arraigned.

Harlee apologizes to Marcus for lying.

Woz gets in to see Espada. Espada blames Woz for being in jail. He thinks he was disposable. Woz tells him to stand tall. He’s going to come up with a plan. He will walk free tomorrow. Woz gets in his car and beats the steering wheel.

Woz and Harlee talk about Stahl. He wants to talk to Ms. Stahl to get dirt. Harlee goes to her house. She pretends to be the woman in the video. She tells the Mrs. She needs help, he is going to kill her.

Mrs. Stahl lets her in. Harlee tells her that he is taunting her, stalking her. Harlee shows her bruises, telling her that’s what he did. The Mrs. Tells her that Stahl hates to lose.

Harlee calls Woz. She has dirt on Stahl’s dead partner’s wife. She is in witness protection. Harlee has an idea.

Woz, Loman, Marcus and Tess all fight over whether or not to open the trunk to the car. Woz makes it clear that Loman knows he is a dirty cop.

Woz’s kid catches Loman in front of the precinct. He wants to interview him. Loman agrees. They sit down. He records the interview. Loman starts spouting off about the 2 people Woz killed, murders covered up, burned bodies. Woz’s kid thinks he’s joking. Loman is serious. He tells him he really doesn’t know his own father.

Harlee and Woz find an agent, Molly. They need her help to find the wife of Stahl’s ex-partner. They tell her that Stahl is getting crazier and crazier. She tells them to leave her alone or she will report them. She leaves. Harlee asks Woz what his next move is. He tells her to leave. She’s free to go. She tells him that she can’t, she loves him. She wants them to be together. All of them. He asks her how she was such a great liar. She tells him that she stayed focused on what she has to live for.

Loman leaves the interview. Woz’s kid looks sick. Tess watches curiously from her desk. Marcus brings the car. Before he goes in, he checks the truck. He seems torn. The council woman gets news that the latest polls are working in her favor.

Marcus is visiting his brother in the hospital. He tells him his debt is paid. Woz and Harlee sit together. She wires him up. He heads to the local bar. He sees the council woman. He waves and then takes a shot at the bar. She senses his stress. He looks at it and leaves. He gets into his car. He sees a bus coming down the road. He gets out and slowly walks in front of it. The bus stops right in front of him. Harlee calls.

Harlee brings Stahl a zip drive. He connects it. He listens to the audio. It’s the wife of his dead partner. He freaks out. He smashes the zip drive. That woman is sick, he tells her. Harlee made copies. Harlee accuses him of being obsessed with his partner’s wife, of having an affair and getting his own partner killed. Stahl is responsible for criminal negligence. She wants Espada out now and she never wants to hear from him again. On her way out, she smiles at Molly who is walking by.