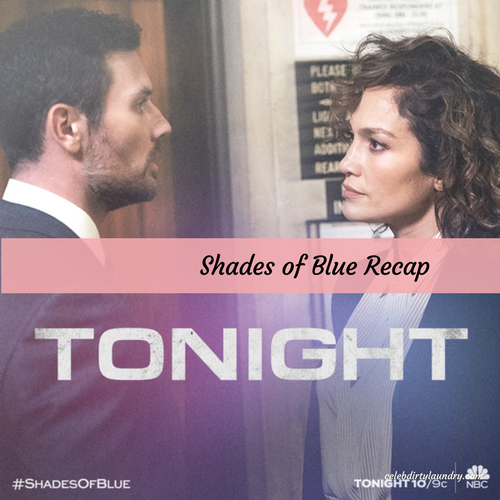 Shades of Blue airs on NBC tonight with an all new Sunday, April 9, season 2 episode 6 called, “Fracture,” and we have your weekly Shades Of Blue recap below. On tonight’s Shades of Blue season 2 episode 6 as per the ABC synopsis, “Harlee (Jennifer Lopez) and Wozniak (Ray Liotta) investigate Caroline’s murder, putting Harlee and Nava’s relationship in an awkward place; Wozniak focuses on determining which member of his crew is informing to “Verco; and Loman uncovers a deep secret.

Julia came through on her end. She arranged a meeting between Bianchi and Woz however, she had thought there was going to be a cease and was unfortunately, wrong about that because Bianchi hadn’t wanted an end to the bloodshed. He would have rather have had a name. He wanted the name of whoever set Woz and Harlee on his people. But Woz couldn’t give him that. He knew that if he revealed Stahl’s name that everything would come out about his crew and that he would be stuck with Stahl’s murder attached to his name. So Woz tried to turned Bianchi down politely.

He told Bianchi that didn’t matter whoever had come up with the idea to frame him because a cease-fire meant that they didn’t have to see each other ever again. However, Bianchi wasn’t happy with that answer and decided not to make peace. He said that he would hold onto Harlee’s gun a little while longer until he got what he wanted and so the parlay was abruptly called off though neither Woz nor Harlee were happy about leaving her gun behind. They both knew that Bianchi wouldn’t stop coming after them unless he gets what he wants. So they came up with a plan.

The two figured that if they solved Caroline’s murder that it would lead them back to the hitman that had Harlee’s gun and therefore they planned on acting like cops. They brought Tess in and she worked the case with Harlee. Though the first thing they had to solve was who slept with the victim within hours of her murder. So Harlee was forced to talk to James again like a suspect. She had to ask him if he slept with his ex after she left his apartment and he had said “no”. James had wanted a clean break from his ex and so he didn’t give in to her no matter how many times she called or stopped by his place yet he did know that she had been seeing someone from work.

The other guy was apparently named Ethan and he lived a few blocks from her which was why Caroline probably took a shortcut through the park. Yet, this Ethan was a bit of a jerk. He kept going on and on about Caroline’s ex James that he thought could have something to do with her murder and Harlee found him annoying. She thought that he shouldn’t’ make presumptions on what was essentially her case and so she had turned him in the middle of their interview when she noticed all of the security cameras around his apartment building because the area was a good neighborhood.

But finding out more about the hitman hadn’t been a pleasant experience for Harlee. She had learned that this Vincent character had used his girlfriend’s case to tail her and Caroline. So she was able to recognize him right away and hadn’t known why his face hadn’t come to her before that however, Vincent had an apartment that she and Tess checked out and they hadn’t known how paranoid their perp was until they almost ran into his bobby trap. He had rigged his apartment to kill whoever broke in and that had almost happened to Tess and the fact it didn’t was down to Harlee.

Harlee had spotted the trip wire and she had helped Tess navigate it. However, Vincent’s apartment was more disturbing than a little booby trap. He had seemingly kept records of his jobs both in the past as well as upcoming ones and so Harlee realized that he had been following James into work though even as she and Tess raced through the city to get to James in time they had panicked about Bianchi suddenly being bold enough to attempt an assassination on ADA at the courthouse. So the two had driven like mad to get to James and they had seen for themselves how Vincent had been playing chicken with them.

The hitman had had every opportunity to assassinate James and he hadn’t taken it after hours of waiting yet Harlee had gone after Vincent because then it became more than just retrieving her gun. She also wanted to protect James in case this Vincent guy ever came back. Though pursuing Vincent and in heels no less was a difficult and he gave her a run for her money by trying to use the subways to hide. So Harlee took a gamble when she arrested him down there because there were too many witnesses to inform police or anyone else for that matter if she left Vincent head hanging over the platform and so it was a lucky thing when her good judgement kicked in.

Harlee chose to later arrest Vincent rather than just put a bullet in head and so she booked him down at the precinct. Yet, Woz had been surprised by that. He would have guessed that she killed the guy when no one was looking and so he asked her what she was doing by bringing the guy in for booking, but Harlee’s reply had been simply. She said that she was simply living up to the protect and serve mantra. So a part of that also had something to do with ensuring that Vincent stayed in jail so she asked Woz for his gun because she wanted to frame the actual murderer for his crime. And so the only other problem that Harlee thought she had to deal with was James.

James had found out that she had arrested someone not long after she had asked him if he was ok and so it wasn’t a big enough jump to suppose the perp had something to do with Caroline. But James had wanted to know. He said he wouldn’t risk the case however he also added that he had right to know who was coming after him. So Harlee told him that Vincent was one of Bianchi’s men and that had made James blame himself because he thought Bianchi had killed Caroline out of spite for James trying to prosecute him.

However, Harlee tried to talk James out of beating himself up and she had tried to say that it wasn’t as bad as it appears when she saw Vincent make a pretend gunshot at her from his cell. So that had unnerved Harlee and she later asked her daughter to go stay with her aunt for a few days while she works everything out though unfortunately the crew had bigger problems than the mafia wanting to settle a score because Woz had gotten paranoid. He began looking at everyone in the family with suspicion and wondering if they were the rat. And he went a little too far when he began accusing Tufo.

Tufo’s brother had finally gotten parole after five tries and Woz had thought that was too convenient with what’s been going on. Though confronting Tufo and getting into a fight with him had made Tufo question if Loman had right. Loman has been investigating Woz on his own time to find out what Woz was truly up to and he had thought that Woz was the one that was going to rat them all out yet he had been wrong about that because there wasn’t a new rat. Woz had looked into it and he had found out that IA was being fed information directly from the FBI and funnily Stahl had nothing to do with it.

Stahl had been running around time trying to find dirt on Harlee even if meant pretending to be a junkie to get close enough to Caddie, but he hadn’t known that someone from his department was trying to sink his case and therefore he found out that he also had a leak that he wasn’t prepared for. Yet, Woz later called a meeting with the crew in the freezer and he told them that he was sorry for accusing them when he should have known better. So Loman had asked him why he saw him talking to Stahl and was accusing him of being the rat when Harlee spoke up. She said Woz wasn’t the rat and she was actually the informant.