BY Kristine Francis on May 21, 2017 | Comments: Leave Comments
Related : Uncategorized 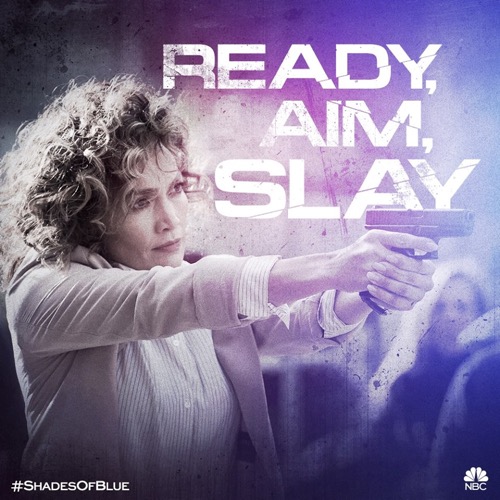 Shades of Blue airs on NBC tonight with an all new Sunday, May 21, season 2 episode 12 called, “Behind the Mask,” and we have your weekly Shades Of Blue recap below. On tonight’s Shades of Blue season 2 episode 12 as per the ABC synopsis, “Harlee (Jennifer Lopez) helps Nava cover his tracks after a violent encounter, revealing a side of herself he’s never seen before; Wozniak (Ray Liotta) faces a ghost from his past in order to take down a new enemy; and Stahl’s quest for the truth about Miguel is boosted when he receives a critical piece of information.”

Woz attended a therapy session. He told his counselor that he believed something was on the horizon and he was talking about Bianchi however, Harlee had later tried to give him some good news. She said that Bianchi had been force to turn over his passport and that trial was going ahead. But Woz knew that nothing good could come out of Bianchi being free to walk around. So he was trying to get as much information as possible out of Harlee about what happened in court when she suddenly something worrisome. She saw Bianchi go into the same bathroom that Nava had recently entered and so she had hung up on Woz because she had been concerned about what could happen between the two men in the bathroom.

However, Harlee had gotten upstairs too late. She had heard some shuffling and had gone into the bathroom to find Bianchi on the floor. He had apparently been pushed by Nava after he had bragged about killing Caroline and threating Harlee’s life. So Nava had pushed him and the other man had hit his head on the sink on his way down with the wound bleeding quite profusely. And so Harlee had made a quick decision. She had told Nava that Bianchi had assaulted him and she had then arranged the scene in the bathroom to make it look like Bianchi had come after Nava with a piece of glass yet Nava had had a hard time with going along with the story.

Nava had wanted to tell the truth and confess that he assaulted Bianchi because he had gotten angry. Yet, it was Harlee that convinced him he should stick with her story and they had shouted for help like he had really been in danger. So the story had been straight-forward and the crew for one had been happy that Bianchi had ultimately died though Nava on the other hand, had questioned his relationship with Harlee as well as who she truly was. He said that she had covered up the scene like a pro with no reaction whatsoever and so he had wanted to know what she was capable of? Like was she capable of framing Bianchi the first time around?

Now Harlee didn’t answer that question, but the truth had been written all over her face and so he knew that she had made them vulnerable. Harlee had framed Bianchi which was what caused Bianchi to go after all of them. Though the truth was by far much more complex than that and Harlee didn’t know how to tell it. So Harlee didn’t know how to convince Nava to take one more chance on their relationship meanwhile the crew had found out about a new threat. The drug dealer they had taken down not so long ago because he had used his semi-stepson to sell drugs, had placed the streets on open warfare from behind bars and Woz had needed to take him down fast.

Woz also had another problem, though. He had wanted to find out what was on Bianchi’s blackmail tapes and so he had asked his son Nate to hack into it. Yet, Nate had had some sorry news for his father. He had hacked the code and was able to now hear it except there was a tape on Julia. She had visited Bianchi and had admitted that the FBI were using Woz to get to him. So Bianchi had told her that she had to choose. He said that she had to choose between him and Woz because he was planning on hitting Woz’s house that night. And while she had tried to talk Bianchi out of it, she had told Bianchi in the end that he better not miss.

Meaning if he was going to do it that he better kill Woz or Woz would keep going after him until it was over. However, Nate and Woz had considered Julia to be a family friend and so listening to the tapes had made them aware that she was willing to betray them just to receive Bianchi’s backing as she runs for higher office. So that had hurt them more than anything yet Woz had still tried to give Julia a chance. She had stopped by his office after she found out that he had broken into Bianchi’s lawyer’s office and she had wanted to know if he had anything on her opponent. And if not her opponent if he had anything on her?

Woz had said that he would handle it and that had reassured her because she thought he would still do anything for her. But Woz himself hadn’t been sure about what he would do. He had once trusted Julia more than anyone and so he had gone back to therapy. There he had talked about his marriage, his children, and he had told the counselor that he knew who he was. He knew that the counselor was the former drug dealer that had once sold drugs to his daughter that ultimately killed her and that he was same guy his son Nate had assaulted. So Woz told the counselor that if he ever heard anything from him about an assault that he would come back.

So Woz had ensured that whatever he did wouldn’t fall back on Nate and then he had gone to Harlee’s. He had wanted to talk to someone truly about what Julia did and he had even cried over everything that had happened since the very beginning because a part still wanted to know how they ended up in their current position. Where they have the mob coming after them, local drug dealers try to put a price on them, and someone they thought was a friend suddenly turning on them? However, Harlee didn’t know and she was still trying to process her own feelings. She had confessed to Nava that she had killed Miguel and that other people have died over what she did.