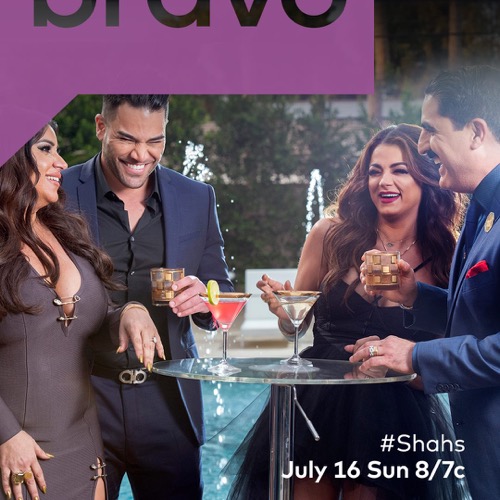 Tonight on Bravo, Shahs of Sunset continues with an all new Sunday, July 16, season 6 premiere called “The Miracle Baby,” and we have your weekly Shahs of Sunset recap below. On tonight’s Shahs of Sunset Season 6 episode 1 as per the Bravo synopsis, “MJ and Tommy move into their new condo, only to clash with a neighbor, in the Season 6 opener. Also: Asa reveals her “miracle” pregnancy; GG is on a path to finding Zen; Mike hosts a housewarming party and MJ and Reza face a crossroads.”

This week on the season six premiere of Shahs Of Sunset MJ is moving into her new condo with her boyfriend Tommie. They are having serious issues with the condo because it needs a serious overhaul. MJ says “Living here has some serious drawbacks such as construction and thievery.

Mike is struggling with his newly single life. He says “My ex and I are cordial. We text mostly about the dogs. Everyone is worried about how I am coping with the single life so I have decided to throw a house party to show everyone that I am doing just fine.” Mike is on the phone with his mom. She asks him “How are you doing?” He tells her “I’m fine.”

Asa meets with Reza and reveals her pregnancy to him. Reza is shocked that she kept the secret from him for five months. He tells her “I’m so happy for you! Now when you’re riding in the carpool lane and you get pulled over you won’t get a ticket!” Asa laughs and says “I won’t get a ticket. I’m gonna fight it!” Reza then gets serious and says “What do you think MJ is going to say when you tell her?” Asa says “I hope she’ll be happy for me. She tends to be a negative person, but I’m happy and if she can’t be happy for me she can take that negativity and keep it moving. I don’t have time for that.

At MJ’s condo Vida shows up to check out the new place. She says “What are you guys doing with all of these boxes in the middle? What am I supposed to do if I want a glass of water?” Vida is not happy to see Tommie there. She says “I will never come to the apartment if he is there.” MJ says “My dad had a mild stroke and is in the hospital. Hopefully he will make a full recovery. Hearing Tommie and my mom fight sounds like the last fight my mom had with my dad.” She tells Tommie “Don’t shout at her.” Tommie quickly apologizes to MJ to try and keep the peace, but Vida is still not happy.

GG is meeting with her friend Tara at Hyperslow for a Yoga class. GG says “Some people can be told that fire is hot and they will never touch it. With me If you tell me it’s hot I will jump right into it.” Suddenly there are loud screams coming from everyone in the room. Tara says “What if we thought about forgiveness as self love? We are going to write down what we want to forgive and throw it away.”

Asa and her mom are there for her ultrasound. The Dr tells her “The next time you come you’ll have to get your flu shot and other vaccinations. Asa is very nervous about this. She says “I don’t know if I want to do that.” The Dr tells her “All of this is good for you and the baby.” Asa’s mom tells her “You can’t feed the baby any crap. No soda or meat.”

Reza and Adam are playing tennis. Adam twists his ankle and starts talking to Reza about wanting a baby. Adam says “I want a baby sooner rather than later.” Reza says “We’ve only been married a year. I think we need to wait until we have a house and are more settled before we start talking about having kids.” Adam tells Reza “Knowing that Asa is pregnant makes me want one now.” Reza is very disturbed by this…

Mike and Shervin are hanging out at Mike’s new house when Reza shows up. Reza asks “What’s going on at the crib?” Mike says “I want to have my housewarming party this week,” Reza says “What are you going to do for the party?” Mike says “Just something simple.” Reza says “Please Mike. I have a friend who plans parties, Let me call her. You have the money.” Reza then asks “Who is on the guest list?” Mike says “Just the homeboys and GG.” Reza says “I can’t be around GG. I don’t want to be in the same room with her.” Mike says “Fine. I won’t invite her because I don’t want drama, but i’m telling you she’s changed.” Reza says “I don’t believe you. I’m waiting for a flying pig.”

MJ asks Reza to come with her on a surprise outing, When they get to the place Reza . out they are getting their assholes bleached. He says “No one is going anywhere near my .” MJ tells him “We’re getting this done.” When it comes time for this procedure Reza freaks out and he is not happy. He says “My ass is going to be pretty and brown with an angry white mouth!” When it’s GG’s turn her procedure goes much smoother. Reza tells her “Babe your ass is so pretty!”

Mike is cleaning up and preparing for his housewarming party. Reza’s party planning friend comes over to get things set up. She brings over hot waitresses and setting up other things. Mike comes in and sees the ladies that Destiny has positioned with bikinis and lampshades on their heads. He says “Some people can say I’m an asshole, but I had no idea this was happening.”

The guests start arriving and Asa and MJ are not happy to see each other. MJ is not interested in rekindling their friendship. The guests are standing outside talking and someone asks about GG Mike says “I didn’t invite her out of respect for certain friends here.” MJ smirks. Mike says “If you are interested in holding a grudge that’s on you.” Then Asa says “I have a big announcement to make.” She then turns and shows off her baby bump. Everyone is excited for her except MJ. She says “I can’t believe Asa got pregnant first.”

MJ tries to be happy, even going so far as to embrace and congratulate Asa on her news, but she is devastated to hear the news. She heads into the kitchen. Shervin follows and tries to comfort her. He says “I can appreciate that you put everything on hold for your dad, but you have to remember to live for MJ too.” MJ says “I don’t want to have a baby right now.” It’s obvious that she is upset about Asa’s pregnancy though.  Reza takes MJ outside where she drops a bombshell. She says “I want to have a baby too.” She also admits that she’s not ready. Mike thanks everyone for coming to the party and thanks Destiny for planning it…