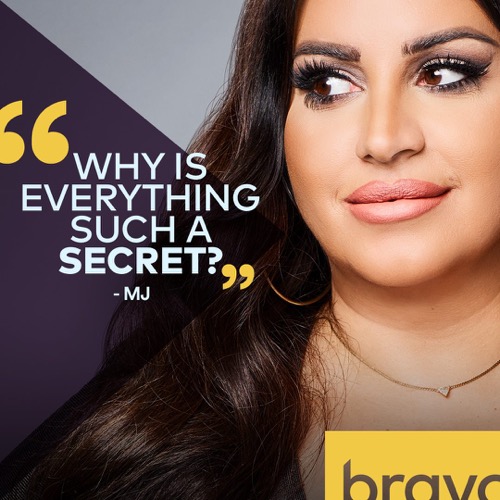 Tonight on Bravo, Shahs of Sunset continues with an all new Sunday, July 23, season 6 episode 2 called “A Long Trip for a Short Apology,” and we have your weekly Shahs of Sunset recap below. On tonight’s Shahs of Sunset Season 6 episode 2 as per the Bravo synopsis, “Reza and Adam throw an anniversary celebration, where the group learns that Shervin and Annalise are exclusive. Also, Shervin hosts a Malibu house party, where he hopes Reza and GG will make amends, plus MJ and Reza visit her father.”

This week on Shahs Of Sunset GG shows up to hang out with Asa and the two ladies get reacquainted. GG notices Asa’s baby bump and asks her “Are you pregnant?” Asa confirms that she is and GG is excited for her. She asks her “How far along are you?” Asa tells her “Five months.”  The two ladies talk about the pregnancy. Asa says “I wanted to tell you because I told everyone else last night.” GG says “How did MJ react? Was she jealous?” Asa says “Everyone was pretty cool. MJ was a little upset but I just am in such a good space right now I am only focused on one thing right now.”

MJ shows up at Mike’s the day after the housewarming party. They are discussing Asa’s pregnancy. MJ  says “Asa and Jermaine are doing things the wrong way. They are not married and don’t live together.” Mike agrees. He tells her “The Persian culture has certain things that are taboo.” MJ says “Why don’t they do it right. Get married and then have a baby?” Mike says “Yes, but these are her choices.”  MJ says “She is so secretive. I am so open you could fillet me”

The group heads out to celebrate Adam and Reza’s one year wedding anniversary. Asa asks “Is GG coming?” Reza says “No.” The group decides to play a game to see if they can determine the sex of Asa’s baby. They take one shot for a girl and two for a boy. Adam says  “Does anyone want to take a guess when Reza and I will be having kids?” Reza is not happy about this. He says “With Asa being pregnant Adam’s uterus is on fire, but I am not ready to have a baby in my arms yet. We have only been married a year.”

The group shows up at a zoo to have dinner and have animal experiences that Adam missed out on in Thailand. Mike has a blast with the monkeys while Asa connects with the turtles. The group sits down to a beautiful dinner and Shervin and Annaliese are immediately put on the spot. Reza asks Annalise “Aren’t you worried about him while you are living in Australia?”  The conversation gets a little tense when Asa asks “I want to know who is going to be the next one to have kids.”

Adam speaks up and says “I want us to have kids.” Reza gets frustrated and says “We have to grow up and stop being kids before we have kids.” The group then goes around the table asking questions. MJ aks Asa “Are you and Jermaine going to get married?” Asa responds “We are going to get married when we get married.” MJ then says “Are you guys going to move in together?” Asa says “We are going to move into our own house.” She then says “Are your parents going to be there?” Asa gets upset and says “No, they will be at their own house.”

As the questions continue Asa gets more and more upset. She says “I’m pregnant and this is a happy time and all you can do is fire hypocritical questions at me?” Reza says “There was a time that Persians didn’t mix with any other cultures so this should be celebrated,”…

Adam meets up with GG despite objections from Reza. GG says “I’m really happy you came whatever your reasons.” Adam says “I don’t ever recall receiving an apology from you.” GG says “What happened to you was really bad and you being the most innocent person in all of it was the suckiest part.”

GG goes on to tell him “I never had the video. I lied about it.” Adam tells her “Apology accepted.” GG hopes that this can be a building bridge between her and Reza. When Adam returns home Reza asks what happened. Adam tells him “She apologized and I felt like it was coming from a genuine place. I would just love it if you could accept her apology and let it be done.” Reza says “She hasn’t offered an apology for me to accept.”

MJ and Reza are hanging out and preparing to go to Shervin’s party. MJ receives a call about her dad from the rehab facility. MJ decides to go see her dad before heading over to the party. Reza says “While you’re gone I’m going to clean up to hep you because this place is a mess.” MJ thanks him. He tells her “Get your life together because we are heading out!” MJ laughs and walks out of the room.

When MJ and Reza get to the facility her cousin Nadia is there and her dad Shams is not having such a great day. Reza and MJ are both struggling with seeing him so weak. MJ tells him “You’re going to get better.”  MJ tries to stay strong.

Meanwhile Shervin is preparing for his party. Everyone is arriving and having a great time hanging out. Reza and MJ are on the way to the party and talking about seeing her dad. She says “When I saw my dad yesterday he looked like Roger Moore. I expected him to be like “Get me a hooker.” Reza is worried that MJ is in denial about her father’s condition. He says “I think she is seeing him as he was and not as he truly is.” He tells her “If anyone says anything stupid to me after that I may just cut their head off.”

When MJ and Reza arrive everyone asks her about her dad she tells them “I don’t know. He’s ok.” GG is really nervous about seeing Reza. She decides to go ahead and avoid it. Reza tells the guys “MJ is in complete denial about her dad. She tells him I need to do your hair. She also thinks he’s going to be there to walk her down the aisle and hold her baby.”  Mike says “She’s in denial.”

The party is in full swing and GG is still nervous. She wants to talk to Reza and avoid him at the same time. Reza is avoiding her like the plague. Eventually he calls both GG and MJ over to sit with him on the couch to try and work out the issues. Reza says “I have had the most amazing experience at the hospital today and I don’t want to have beef with anyone.

What am I holding on to?” GG says “I have something for you guys upstairs.” MJ says “Go grab them.” GG comes back with these little Buddha men to give to each of them. GG then apologizes to Reza sincerely. Reza says “I appreciate it. I accept it and I forgive you. Let’s move on.”  Everyone hugs and makes up…