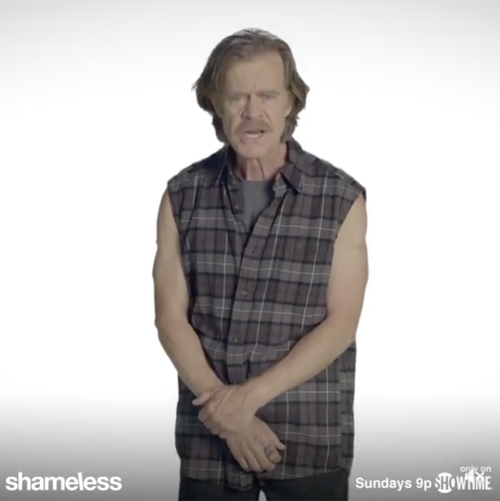 Tonight’s Shameless season 8 episode 3 is going to be great, and you won’t want to miss it. So be sure to bookmark this page and tune in for our coverage of Shameless tonight between 9 PM – 10 PM ET! While you wait for our recap, make sure to check out all our Shameless spoilers, recap, news & more, right here!

Carl Gallagher (Ethan Cutkosky), Lip Gallagher (Jeremy Allen White) and Ian Gallagher (Cameron Monaghan) talk about the fast Meth head they were running from, talking about how Monica f*ckd up their lives as Debbie (Emme Kenney) wonders if he knew her name. Father, Frank (William H. Macy) tells them meeting adjourned, saying he doesn’t have a magical way of replacing 70 grand in meth but he doesn’t want to discuss it any further.

He says he is high on life and they are no longer talking to the old Frank, who robbed the storage unit. He tells Ian he has been a drama queen since the day he was born and reminds them the methhead doesn’t know where they live and just stay away from the storage unit and cemetery. When Fiona (Emmy Rossum) and Liam (Christian Isaiah) come down the stairs for breakfast, the family quickly disperses; he reminds them there is no worrying about old news and tells Fiona he goes by
Francis” now.

Veronica (Shanola Hampton) is complaining to Kevin (Steve Howey) about the kids eating habits and the bills and almost regretting getting Svetlana (Isidora Goreshter) arrested. She doesn’t feel it is important for them to get the genetic testing done, to make sure he didn’t pass down his bad genes to their kids. Fiona arrives for some products to clean the empty unit, while Veronica gets the products, Kevin wants to show her how to properly check her breasts for lumps. He checks her and says she is okay.

Lip talks to Brad (Scott Michael Campbell) about the meth dealer coming after them, and how that is the legacy their mother left them. Brad says its funny how sobriety goggles are the opposite of beer goggles. Brad brings in a motorcycle, saying he is giving him something to obsess over that isn’t him, giving him something that will prevent him from turning back to the bottle. Meanwhile, Professor Youens (Alan Rosenberg) is so drunk when he is driving he passes out and drives right into someone’s living room.

Ian talks to Trevor (Elliot Fletcher) about the drug dealer chasing him, admitting that Gallaghers are not normal humans; Trevor says grief can change people, talking about his mother’s death. Ian says he’d rather talk to him, in fact, he’d rather do a lot more than that with him.

Fiona is busy cleaning her apartment when Lip comes to see her. She asks about the family meeting this morning but he says he has a friend in trouble and needs to borrow her car. She hands him the keys, saying it was a DUI and bolts out the door. Nessa (Jessica Szohr) brings Fiona a drink, asking if she found a renter yet. Nessa’s girlfriend arrives, announcing their friends from the gym want to rent the place; Fiona asks if they can pass a credit check but she says they vouch for them, she leaves saying she will set it up.

Outside, Carl set up the hot tub and welcomes several girls to join him while Lip goes to pick up Professor at the precinct. At work, Frank changes his name loves being named after a saint and changes his birthdate. Now he asks his co-worker if he wants to ask him something but he says he forgot and Frank asks if that is because his presence brings him peace.

Lip drives the professor home, who laughs that he is losing his tenure and getting fired. At the Dr. office, Kevin is told he is in fine shape when it comes to inheritable diseases. Veronica tells them this is a little over their heads and asks them to speak in plain English to them. After much babbling, she explains that he comes from one of the most inbred populations in the United States. Fiona shows the apartment again to a potential tenant and seems pleased when he can have first, last and a security deposit.

Lip brings the professor home, offering to buy him groceries but he tells him not to bother as it will go bad as soon as he goes to prison. Lip says he will get him some food and find him a lawyer, but the professor is passed out before he even finishes the sentence. Debbie talks to the guys at work about her relationship and how she seems to be stuck in it for now. As the tenant is leaving the apartment, Mel (Perry Mattfeld) comes down the stairs and tries to dissuade him from living there, saying there is bedbugs; he rushes out of there as she suggests he burn the clothes as soon as he leaves.

Lip is on the phone with a lawyer as he orders the professor to eat his food. Just after he blew a 1.8 on his breathalyzer, he begs Lip to open a bottle of vodka for him, promising not to drive. He is forced to admit it is his 5th DUI and the lawyer hangs up on Lip; who then yells, demanding to know how that happened. Mel and Nessa’ friends arrive to view the apartment, and Mel is pushing really hard for them to get the place; making Fiona look bad in the process. Mel makes it clear that she messed with the previous applicant.

Sue (Alicia Coppola) tells Ian, that his uncle came to see him, but he races home, realizing it wasn’t his uncle. He grabs a baseball bat and runs to the back where he manages to get a couple of swings in before they get him on the ground with a gun in his face. They are told they have 24 hours to produce the meth or the 70 grand; Ian makes sure Carl is okay. Lip talks to Brad, who says if the professor can get sober for real, the judge might give him a shot.

At the nursery, Frank feeds a blind man’s service dog then promises to lead him to the roses but Fiona shows up. He says it is unethical to cover her supplies and gives her 7 bucks, she tells him to screw off. Lip returns and finds the professor lying down on the ground in his vomit; he says he bought groceries and wants to talk about rehab, but the professor says he has more pressing things to worry about like going to the bathroom or how to drink himself to death because he isn’t going to prison and tells Lip to piss off.

Veronica finds the Huntsville subgroup, she says this is huge, that this is his family and he isn’t an orphan anymore. He feels they are terrible people for abandoning him. At home, the Gallagher brothers are looking through all of Monica’s boxes to learn everything they can about the dealer, Eric (Jamie Harris) and what they are dealing with. Debbie returns home to find out that her husband is in love with Lakisha (Kelli Dawn Hancock), but before she can discuss it she is told to go home for a family meeting. Lip talks to Brad about his guilt, outside their AA meeting. He gets a call as the meeting is about to begin and told to come home by Carl.

Veronica gets the bill for Kevin’s surgery, freaking over the cost as someone comes in and begins to take photos. Kevin gives her the photo of him from his fostercare folder; they learn Svetlana plans on selling the bar. Veronica grabs kids and orders, Kevin, to show her nothing and he asks her if she examines her breasts regular.

Lip arrives and everyone refuses to ask Fiona what she did with her meth. Frank comes home with roadkill in a blanket. Frank says he has cash and gives Lip 7 bucks; Ian suggests they rob where he works but he says it was Monica who did it, not him. They all agree to talk to Fiona, leaving Frank with Liam.

Veronica comes to see Svetlana, telling her to sign the bar to her and she will admit they were legally married. They negotiate as everyone meets Fiona demanding to know what she did with the last 2 pound of meth. She wants them to remember this, how hard they tried not to come to her and admit she was right. As soon as they admit they were wrong and she was right, she will reveal what she did; Carl is the only one who won’t tell her.

Suddenly, Frank rushes in saying its guilt that he is feeling in his blood and veins and he is there to help because if it includes his work discount they are going to need a lot of shovels. They are in the graveyard digging. Then a backhoe shows up and the Gallagher family jumps out of the way, as Carl digs with it, getting the coffin out of the ground. He drops it and they have no idea what to do. Ian suggests holding hands and taking a moment of silence but Frank approaches the coffin; the smell keeps them away.

Fiona says she put the drugs under her, she will go get them but they will have to put her back in the coffin; as they gag, she pulls the bags out and they all return to the storage unit covered in dirt. Eric asks about the smell, takes the drugs and the money. He says the money and the hot tub isn’t enough, so Frank says to leave it to him. He says since he was partnered with Monica, technically half of that belonged to her. She is now dead, so 2 bags of meth, 9 grand plus a hot tub is his and now Monica is 6 feet under again and if he comes near his family again, he will bury Eric with her. Eric agrees; he and his kids leave.

Ian sits at the gravestone as the sun rises. Fiona paints the apartment, revealing she didn’t look at her friend’s application and reveals she knows about her scam with the applicant. She is tired of being nice and mature with her. She tells her if she wants to go ghetto on her, she will beat her at it every time. She orders her to call him and say the bedbug story isn’t true or she will fill her bed with real bed bugs, just so she has an excuse to burn all her stuff in the street and evict her and double her rent.

Veronica gives Kevin the phone, a couple answers and he reveals his history; they freak out thinking they found their son Bart. Carl goes outside to enjoy his hot tub but Eric had it loaded up, and just for good measure, he takes Carl’s towel too.

Svetlana is called by ICE and given her things back, just as Veronica promised. Lip comes to the professor’s help with everyone from rehab, saying he brought rehab to him; refusing for him to roll over and die; joking that he can consider them foul-mouthed Jehovah Witnesses.