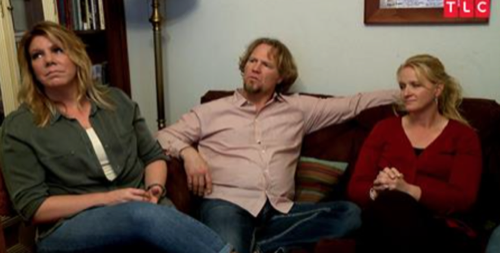 Everyone was hanging out at Christine’s house and truly enjoying their dinner when Christine had this idea. She thought that it would be funny if they all played the Brown Family version of the Newlywed Game. Christine had noticed that they were enough younger couples in the family to make the game interesting so she proposed that they play as a way to make sure that everyone was tested on how well they knew their spouses and so everyone else in the group had sort of reluctantly agreed to Christine’s idea. No one had been excited to play it and the younger couples after all hadn’t wanted to get in trouble with their spouses however, they knew there was no way of it getting out. But they did demand that the older ones also play.

The kids had thought it was only fair that Kody and his four wives played because they thought it would impossible for him to remember all of the answers. However, the first questions had been pretty easy. Aspyn and Mariah had made up the questions and the first they asked had been when was your first kiss? So everyone had pretty much gotten that question yet Janelle had been the lone person out. Janelle apparently didn’t remember her first kiss with Kody and so she totally forgot whether or not they had kissed inside or outside until Kody reminded her that they had kissed by a car. And so Janelle didn’t remember that little detail until Kody answered his question and everyone had gotten a chance to laugh about that.

Yet, what the Newlywed Game truly told everyone was how well some of the couples were attuned to each other. Take Tony and Mykelti for example. They had been asked who did they think was going to be the next couple that got married and Tony thought Kody would find a fifth wife and Mykelti had answered that she personally thought her brother would be next that though she said Tony thought her father would get married again. So they knew each other very well and the parents thought that was because they shared the same type of humor and that they loved to push other people’s buttons. And, well, Christine just thought that they both think what would a five-year-old say and then say it.

So the game was for them and the questions were clearly silly, but they also opened some old wounds for a certain couple and that showed when the sexes had been split up. The guys had been taken to another room while the women answered what they thought was going to be their men’s answers and so the women were being asked all these questions when one of them got to Meri. She had been asked what pet name Kody calls her and she couldn’t remember one. It had been so long that she and Kody were in a good place that they haven’t called each other pet names in a very long time. Though luckily Meri had remembered the pet name they used to call each other and she had picked the right one by time Kody came back in the room with the rest of the guys.

Kody had heard the question and has answered “lover” which was what Meri had put on her card at the end of the day. So everyone hadn’t known that Meri had struggled with that answer or that she had been left a little sad that she doesn’t call or get called a pet name anymore. But the game continued on and it was even funnier when the guys came back from their seclusion. They had been asked questions like what can’t you wait to do when you’re alone with your woman and Caleb hadn’t wanted to answer that one because he didn’t want to say it in front of his father-in-law. And so he tried to frame it as best he could be saying “making babies” and Maddie had framed her answer to say “making babies” as well.

So it was a fun game. They got to laugh at each other as well as at themselves because the questions were all made in good spirits. However, the questions that had awarded the most point had been “who was the worst driver?”. Kody had said that all of his wives were worst drivers than him yet in the overall he had said that Christine was the worst driver which was again funny because Tony thought Mykelti was a horrible driver. He said that she had so many tickets and no one had known about those so she tried shush him as possible. And another question was what the last movie that the couple had seen where she had cried the most and for that one Kody had actually tried to cheat by feeding his wives answers.

Kody had gotten it right when he correctly guessed “Titanic” for Meri though he had tried to coach Janelle and Christine with their answers. He tried to lead them to the movie that he had written and that had only worked with Christine who he led to answering “Frozen”. Christine had apparently blubbed the moment Elsa started singing “Let it Go” because she had resonated with Elsa about growing up in fear. So she had cried during the movie and after the movie because she had been so proud of Elsa who was admittedly a fictional character. Yet, the game had also helped a few of them heal. Aspyn and Mariah had asked what was the man’s most improved area and Kody had answered speaking calmly and Meri had said the same about him.

The catfishing thing had been a horrible experience, but it had also showed Kody that he needed to work on his marriage to Meri because before that they had always been at each other’s throats for some reason. Though since then they have gotten better at speaking to each other and overall Kody has been paying more attention to what his wives need from him. So Kody didn’t land in bottom place for the Newlywed Game. He had gotten somewhere in the middle and the person that did land in the bottom had been Janelle meanwhile her daughter Madison had gone on to win the entire game after a tiebreaker with Tony.