BY Sarah Luoma on August 7, 2017 | Comments: Leave Comments
Related : Reality TV, Recap, So You Think You Can Dance, Television, TV 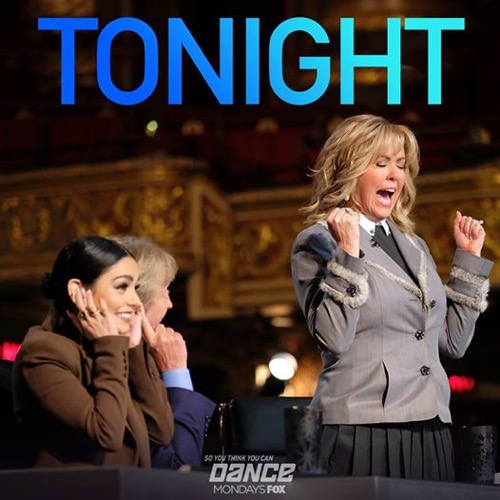 Live from Hollywood, the Top 10 will be revealed. The group comes out to dance on the stage for the 1st time to Knocking on Heavens Door. Cat comes out on stage. She welcomes the crowd and shows off the new show’s set. Cat tells the crowd that Allison hurt herself in the group number the day before and could not perform. Cat welcomes the judges: Vanessa, Mary and Nigel, who is back after receiving a pace maker. He is doing well.

Dancers Dassy and Fik-Shun have made some major improvements and dedication.  Cat brings them out on stage to do their hip-hop number. They both shares similar wardrobes of fedora hats and suspenders. The crowd goes wild. Mary loved it! Nigel was impressed over all of their moves. Vanessa thought they were absolutely fantastic.

Allison narrowed her team down to Logan. Audrey will step in for Allison since she is injured. Logan and Audrey dance a contemporary routine to the song Not the Protocol. Nigel thought they did great. Logan was a great choice, he is a stunning dancer. Vanessa shares that he heart is in her stomach. The emotion and the strength and the passion was insane. Mary thought Logan was simply the wings of the choreography.

Jenna had a hard decision choosing her partner: Concrete or Kiki. She chose Kiki. The two come out to dance a steamy number to There’s Nothing Holding Me Back. Cat tells them that they make her weak in the knees. Mary would love to dance with Kiki. She thought Jenna was dynamic, Latin hotness and so grounded. Kiki is now on her radar. Nigel congrats Kiki and applauds Jenna for choreographing 2 routines last week. He couldn’t take his eyes off of her. Vanessa is excited for them. They really shine together.

Cyrus will reveal his new dance partner. He had to choose between Havoc and Kaylee. He chose Kaylee! Together they will dance a contemporary routine to Clown. They make the crowd go wild. Kaylee tells Cat that she always wanted to work with Cyrus because he would challenge her. Mary thinks their routine was clever. Mary thinks Kaylee is interesting to watch. Nigel thinks Kaylee needs her to raise her game a little bit. Vanessa says she loved watching Kaylee but she wants to see some more weightlessness and breathe to her movement.

Gaby also had a difficult time trying to select her partner. It’s between Lex and Evan. Gaby feels like between the two, the person who needs her most and deserves to go to the live shows is ….Lex. Together they hit the stage in white to tap dance to the song More. Nigel thought they were stylish and elegant like the 40’s. Their dancing was beautiful. Nigel thinks Lex is a great all around dancer. He just needs to let his personality out and not hold back. Vanessa loved it. Mary goes crazy screaming. She loved it too!

All-Star Comfort felt a connection with Mark, making it a given she would ultimately choose him. The two come out and dance a hip-hop routine. Vanessa congratulates Luther Brown for the choreography of the routine. She thought they killed it. Mary thought the chemistry was magnetic. Nigel loved it all. All-Star looked great and Mark is like Bruno Mars’ little brother.

Marko loved dancing with Sophia and Koine. They both did an excellent job. But it was Koine who he chose. The two come out to the stage to dance a contemporary number under a starry sky. Mary thanks the choreographer, the camera man and the others that brought the routine life. She thought the dancers made it look effortless. Nigel agrees with Mary.  He thinks Koine looks like a Malibu bride. Vanessa thought it was so beautiful, pure and graceful.

Paul has to choose between two very strong ballroom dancers: Christine and Sydney. He is split between two amazing dancers. Paul chose Sydney. They hit the stage to dance to All Stars. Nigel compliments Val Chmerkovskiy for choreographing such a great routine. Vanessa thought they were great but she needs to see Sydney bring out some more pizazz. Mary that they were fast and furious. Mary loves Sydney’s dress and long legs.

Robert had to pick from Jonathan, who can fly across the stage, or Taylor whose body lines are stunning. Robert chooses Taylor. They dance to Change is Everything. The two get a standing ovation. The judges are thrilled. Vanessa is a mess. They took her breath away. Mary agrees! Nigel will never forget Taylor now. She was incredible. The final act will take the stage next.

Jasmine has to choose between two dancers, one who is technical and one who is not. She chooses Robert. They dance to Bruno Mars’ Perm. Cat thinks they did the song justice. Mary is going to call 911! They were amazing. Nigel says call the fire brigade. He loved their style and sass. Vanessa is in the same boat. She loved it too!