BY Sarah Luoma on September 4, 2017 | Comments: Leave Comments
Related : Reality TV, Recap, So You Think You Can Dance, Television, TV 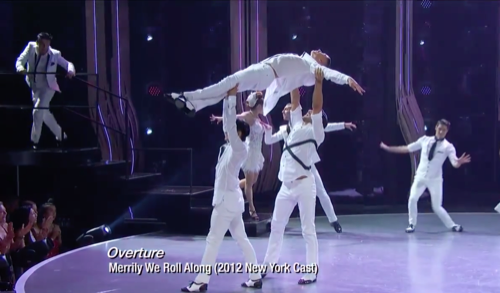 Tonight’s live episode will see the remaining seven compete. Left to compete is Lex, Koine, Logan, Taylor, Kiki, Kaylee, and Mark. All 7 will perform in a duet, a solo and a routine with their All-Star partner.  On to the latest rehearsals, Gaby and Lex will work with Luthor this week. Luthor thinks he is dope. The two take the stage and perform a hip-hop piece. The audience loves it. Lex’s impressive flips has everyone going wild. The judges stand to applaud. Mary thinks Luthor took it to a whole other level. Gaby was on fire. Lex nation destroyed every second of that. He kept is performance consistent and at a peek level. Nigel is proud. Lex has proved that he can perform every genre. Vanessa agrees. He killed it. He was insane. Lex feels like it has been an honor to dance with Gaby.

Before taking the stage for her solo, Taylor’s parents speak about her performances as a child. She remembers wearing little dresses. She takes the stage and shows off her contemporary talents.

Logan was put to the test this week with an African Jazz piece. His long body proved to be an obstacle this week while learning his piece, but it wasn’t evident when it took the stage. The judges stand, clapping at the end of the performance. Nigel loved the choreography. He was impressed by Logan’s twist. Vanessa thinks he is super human and he can do anything. Mary compares their performance to an impressive and unpredictable roller coaster rides. She screams and Nigel joins her!

A look back at Mark when he was younger reveals that he has always been a dancer. He performs his solo to Funkytown. Flips, twists, and break dancing has the crowd cheering him on.

This week Kaylee and Cyrus worked on a contemporary piece. Kaylee feels challenged. Their piece is emotional and difficult. Together, the take the stage a make it appear effortless.   Vanessa thinks the routine was gorgeous. Kaylee thinks she should be proud. Mary thinks she brought it to life. She was believable. Nigel loved it. It was their strongest piece together.

Koine shows off her lifelong love of dance. She takes the stage for her solo.

This week, Kiki and Jenna’s challenge was all about dealing how to dance with a chain to Barry Manilow’s Dancing Fool. Dressed in a red, the nail it. Mary screams with excitement. Nigel didn’t like the routine because Mary kept screaming in his ear! He loves that Kiki auditioned for them and that he has improved so much over the season. Vanessa agrees, they had her holding her breath.

As a child, Logan was very mischievous, charming and funny. He first performed at the age of 7 in a hip hop routine. He takes the stage to perform a brief solo.

Marko and Koine will perform a jive this week. Koine gets to play the role of a beauty while Marko gets to wear a geeky pair of black glasses. Nigel has been pronouncing Koine’s name wrong this whole time. Everyone has also been calling Nigel by the wrong name his whole life. He loved their performance. Vanessa agrees. Mary thought it was great. Koine doesn’t want this to end.

Kaylee performs her solo after sharing her love of dance since a young age. The group gets together to perform a number.

Taylor has been shedding a layer every week, Mandy thinks. This week she will perform a sweet romantic piece. She takes the stage with Robert wearing a beautiful yellow dress. Vanessa thinks she has come so far. Mary thinks luck had nothing to do with tonight. She loved the technique, she feels like they reached inside her soul. Nigel thinks that is the beauty of dance. Taylor danced it beautifully. He thinks her technique is superb. Robert is a brilliant young man as a partner.

As a kid, Lex was super energetic. He started with hip-hop and tap. His first piece was horrible. He performs his solo.

Mark and Comfort have tapped into their inner ninja. The two will perform a hip-hop fight routine. Comfort thinks he is perfect as a ninja with his facial expressions. Mary thought the dance was a great concept. Nigel thinks Mark always brings excitement to his routine. Vanessa thinks Comfort was hard hitting after being so sexy last week. Mark was in unison and fun to watch.

Kiki was a tubby kid with a little belly. He was more outgoing when he was younger. His first appearance was lit. He performs his solo.

Logan, Lex and Kaylee perform their group dance. Nigel loved it. Kaylee is unique so she may not be everyone’s cup of tea. She kept up with them. Logan had great strength. Lex’s triple tour has been mind blowing. What can’t he do! Vanessa thought they were stupendous. Mary loved all 3 of them.

Koine, Taylor, Mark and Kiki show their hilarious rehearsals as they practice their group dance. The four take the stage. Their talents earn screams of excitement. Vanessa thought it was brilliant. Mary thought they did justice to the piece. Nigel thinks the choreographers are as diverse as the dancers.

It is time for the results. All 7 dancers make their way to the stage. The bottom 3 in danger is Kaylee, Mark and Kiki. Kiki is safe. Kaylee is also safe. Mark is going home. Kaylee looks in shock. Mark takes it in stride.