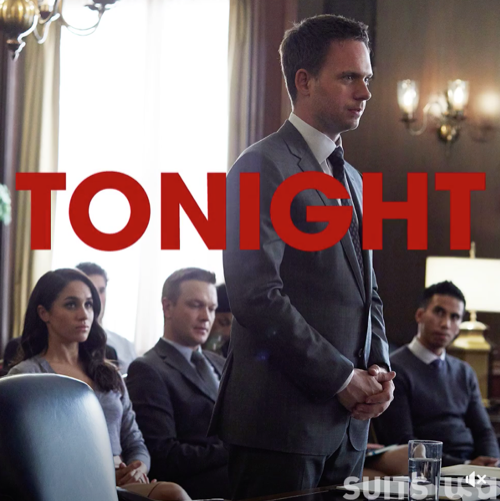 Tonight on the USA Network their critically acclaimed drama, Suits returns with an all-new Wednesday,  March 1, 2017, finale episode and we have your Suits recap below. On tonight’s Suits season 6 episode 16 called, “Character and Fitness,” as per the USA Network synopsis, “Mike (Patrick J. Adams) needs Harvey (Gabriel Macht) and Rachel’s (Megan Markle) help to overcome an impossible obstacle, or his dream of becoming a real lawyer is over; Donna’s new venture hits a snag; and Louis tries to patch things up with Tara.”

Tonight’s Suits finale kicks off with Rachel and Mike. She wakes him up with a cup of coffee, Mike was out late last night. He reveals that he and Harvey pulled it off, and he is getting in to the bar, his hearing is in a few days. Rachel is thrilled, but Mike is having a bit of a moral dilemma. He promised Oliver he would tell Nathan the truth about using the minor’s suit to get back in the bar. Obviously he can’t do that, or Nathan will pull the rug out on the whole scheme.

Louis arrives at Tara’s office, he didn’t get a wink of sleep after their fight last night. Tara is not happy that Louis lashed out at her last night, she says she’s not sure she wants to be with a man that can treat her like that. She promises she will call him and then gets back to work.

Mike heads to work and gives Nathan a check for $50,000. He’s overjoyed, it’s the most money the clinic has ever made on one case, and now they don’t have to worry about making rent. Mike tells Nathan that now that the lawsuit is over, he’s going to take a few days off.

Mike heads to Harvey’s office to discuss preparing for the hearing in front of the ethics committee. They get a shock when their nemesis Anita marches in to Harvey’s office. She announces that she has just been appointed to the board of ethics, and there is no way that Mike is passing the bar.

Mike rushes to Rachel’s office, he tells her to drop whatever she is doing, he needs her to research if anyone has ever passed the bar without a unanimous vote. He explains that Anita Gibbs got herself on the board, and Harvey is working on a way to get her off from it.

Donna stops by Louis’ office, she explains that she and Benjamin have brought on Stu as an investor – but they have hit a roadblock. Apparently, their new gadget overlaps with a patent that someone else currently owns. Donna needs Louis’ help, and he’s thrilled to have a new project to distract him. Donna warns Louis that her new business venture is very important to her, and she doesn’t want Louis to blow it because he’s emotional over Tara.

Little does Louis know, it’s going to be much easier said than done. He meets with the owners of the patent, and they have no interest in budging. Apparently, they think that Benjamin is a hack and he stole their entire idea with his sorry excuse for a digital secretary. They serve Louis paperwork and announce that if Benjamin and Donna move forward, they will sue them for $19 Million.

Oliver is waiting outside of Mike’s apartment. He demands to know if Mike is moving forward with the bar. Mike confesses, and Oliver announces that he has no choice but to tell Mike about his shady business deal to get in to the bar. Mike begs him to keep it between them, Oliver will keep his mouth shut on one condition – he doesn’t want Mike to come back to work at the legal clinic.

Harvey and Donna are working hard to get Anita Gibbs off the committee. She replaced Walter Sampson at the last minute, Harvey knows that she must have dirt on him, and they are going to have to find out what that dirt is. Harvey pays his hacker a visit to rattle him, apparently he still hasn’t found the information they need to prove that Anita blackmailed Samson to get on the board.

Meanwhile, Mike goes before the board for what looks like is going to be a lengthy hearing. Anita tries to kick off the hearing by dismissing Mike’s application, but Seidel manages to sideline her. Mike and Anita spend the afternoon going head to head. They reconvene, and Mike needs to find a character witness for the next day.

Mike shows up at Julius’ doorstep in the middle of the night, he wants his prison therapist to vouch for him. Julius doesn’t want any part of it, he’s sure that Mike did something shady to even get in to the bar. Mike pleads with Julius, and tells him that he just wants to be able to help people, he shares the story about watching a woman lose her home because he couldn’t act as her lawyer.

Harvey and Donna are working late at night, and they still haven’t found any dirt on Walter Samson. Donna thinks it’s time for Harvey to pay Samson a visit and just bluff that he has info. He confesses to Donna that he’s scared he will screw up Mike’s one chance to get in the bar.

Harvey pays Walter Samson a visit and confronts him – he demands to know why he gave up his seat on the board to Anita Gibbs. Walter claims that he just took time off from work to spend time with his family, and he had never met Anita until the day he appointed her as his replacement. Harvey shouts that he knows Anita blackmailed him or bribed him, and he will find out the truth.

The next morning, Julian takes that stand in front of the board. Julian paints a great picture of Mike and winds up getting in a heated argument with Anita. After telling Anita she had no business being on the board, Julian snarks that Mike has more integrity in his little finger than Anita does in her entire body.
Louis sits down with Donna, Stu, and Benjamin. He explains that the other company’s patent is air tight and he couldn’t get them to budge – but he did manage to negotiate a deal with them, and they are willing to buy out The Donna, for a lot of money. Donna’s upset, she doesn’t care about the money, she wanted her own company.

The board is set to vote on Mike tomorrow morning. Harvey makes one last hail mary attempt to try and talk some sense in to Anita. She agrees to let Mike in to the bar, on one condition, she wants Harvey to lose his license to practice law. Anita wants Harvey to confess to the board that he knowingly let Mike practice law even though he was a fraud – and that will mean that they will revoke Harvey’s license.
Mike decides to clear his conscious, he stops by the law clinic and tells Nathan that he cut a deal and he only handled the minor suit so that he could get in to the bar. Nathan is furious and shouts that Mie is fired. Oliver actually steps up to bat, and vouches for Mike and convinces Nathan to let him keep working at the law clinic.

Harvey pays Louis a visit and warns him that he might have to give up his license to practice law, and that means that they will lose the practice. Louis is livid, he can’t believe that Harvey is willig to give up everything, while they are arguing over it, Mike walks in and overhears. Mike interrupts and announces there is no way in hell he is going to let Harvey throw himself to the sharks just so he can pass the bar.
Donna is fighting a war of her own, she’s determined to get a patent on the Donna, and doesn’t want to cut a deal. Harvey looks at the paperwork and tells her to take the money. Donna cries that she doesn’t want the money, she “wants something more.” It sounds like Donna isn’t feeling too fulfilled as Harvey’s secretary.

The next morning, Mike heads to the hearing to make his final statement before the board votes. Harvey, Donna, Louis, and Rachel all sit behind him. It’s looking bleak for Mike. Anita asks if there is anyone that knew that Mike was a fraud at Pearson-Spector. Jessica unexpectedly marches in the room and announces that she is the one that knew, and if they want a scalp – it’s her’s. Before the board leaves to vote, Jessica gives a compelling speech to Anita and the board about the time that Anita showed compassion for a 15 year old that was stealing prescription drugs.

After the board leaves to vote, Jessica explains that the 15 year old in the story she told was Walter Samson’s grandson – and Anita used that as leverage. Sure enough, Jessica’s speech was enough to rattle Anita. A few hours later, Harvey gets a message – Anita voted for Mike, it was unanimous, and he officially passed the bar. He’s a legitimate lawyer.

While everyone is celebrating, Louis steps aside with Rachel. Tara left him a voicemail and he’s scared to listen to it alone. Rachel comforts him while he listens to Tara dumping him in a voicemail and sobs.
Now that Mike is officially a lawyer, Harvey is determined to get him to come back and work at Pearson-Spector. Mike reluctantly agrees, but he wants Harvey to make a donation to the legal clinic to fund them for two years. And, he gets to bring the legal clinic on any case that he chooses, plus he wants Harvey’s office. Harvey reluctantly agrees, and they shake on it.