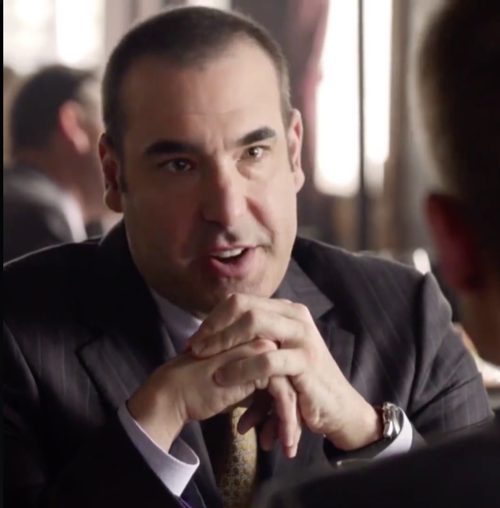 Tonight on the USA Network their critically acclaimed drama, Suits returns with an all-new Wednesday,  July 12, 2017, premiere episode and we have your Suits recap below. On tonight’s Suits season 7 episode 1 called, Skin in the Game,” as per the USA Network synopsis, “In the Season 7 premiere, Mike (Patrick J. Adams) returns to Pearson Specter Litt as Harvey (Gabriel Macht) takes the reins; Louis manages the new class of associates; and Donna and Rachel find their places in the new world order.”

Harvey drives his new car to Paula’s house to ask her for a date. She says yes. Mike walks into Nathan’s office. He gives him a check for $500k. Mike tells him he is going back to Harvey. The money is to replace him and fund the clinic. Nathan accepts it.

Donna wants to be a partner. Harvey is surprised. He thought she wanted something else. He needs to talk to Louis. Mike is resting on the couch of his new office. He wants to know when Harvey is getting his things out. Mike wants Neil Stillman, but Harvey needs him to team up with him one more time before their dynamic changes.

Gretchen thinks Louis needs to take a vacation. He shouldn’t sit around and stew. He has taken a vacation in 9 years.

Louis announces to the associates that he has a new assignment for them. They won’t be doing anything for 2 weeks other than focusing on his project. One associate asks him if he can leave for the birth of his baby. Louis loses it, imaging the entire laughing at him because he will never have a family of his own. He calls the associate a piece of shit, and tells him that he doesn’t care if he is going to be a father. The firm should be his first and only priority. Rachel arrives for the tail-end of Louis’ rant.

Harvey calls Paula to tell her he can’t stop thinking about her. Rachel comes in the bedroom to see Mike and ask him about his party with a bunch of models. She smirks. He asks her to come. She can’t. She might be taking over the associates. He is proud and excited for her.

Gretchen stops Donna at the elevators. Gretchen wants to know what is going on. Donna tells her about waiting on Louis’ answer if she has a seat at the partnership table. Gretchen tips her off – she needs to write a check to get in the game. Donna smiles at the advice.

After the party, Harvey is back in his office working. Mike wants to know when he is going to get out. The managed to weed out the not so serious candidates from the party and have managed to find 2 bidders. Harvey and Mike meet them together in a conference room where they plan to kick off a bidding war. The two men don’t look amused by this.

Donna hands Harvey a check for $500k. She tells him she wants him to take her seriously. He can’t yet. He hasn’t told Louis he is taking Jessica’s spot. Donna tells him that he needs to recognize her now.

Harvey is at dinner with Paula. He can’t stop thinking about the firm. She is upset over this. It is their 1st date and she can’t listen to him talk about work. She is no longer his therapist. She gets up and leaves. Harvey just watches her go.

Rachel approaches Louis. He is angry she went to Donna. She will never take over his associates.

Donna calls Harvey to tell him that Louis is a problem. She needs to know if she is a partner so she can do something about his bad behavior that could ultimately get them sued. He gives in and makes her a partner.

Mike gives Harvey new information about Neil’s company. They need to stop the sale but Harvey needs to talk to Louis. Mike reminds him that they could get in trouble, a lot of trouble. Harvey goes to see Neil. His company is being sued for using another brand’s recipe. Harvey tells him he can’t be a party to fraud. Neil threatens to drop him as a lawyer. Harvey lets the sale go through. Mike is angry that Harvey let it happen. Mike tells Harvey to stop being scared. Stop hiding in Jessica’s shadow.

Harvey returns to see Neil. He tells him that he stopped the sale. Neil is outraged. Harvey tells him to fire his firm. If he does he will issue a press release and the whole world will know. Harvey tells him what he is going to do with his company if he still wants representation. Neil agrees.

Donna approaches Louis and tells him that he is no longer in charge of the associates. He laughs at her. She tells him she is a partner now. Harvey comes in and confirms the news. Louis is shocked. Harvey tells them that they need to deal with their problems ASAP. Louis goes to Rachel to apologize.

Donna breaks the news of her partnership to Mike. He is shocked and happy. Louis calls Tara to get closure. He leaves her a voicemail, he needs to see her. Gretchen commends Donna for her promotion. Harvey drives to Paula’s. He kisses her. She returns the kiss.