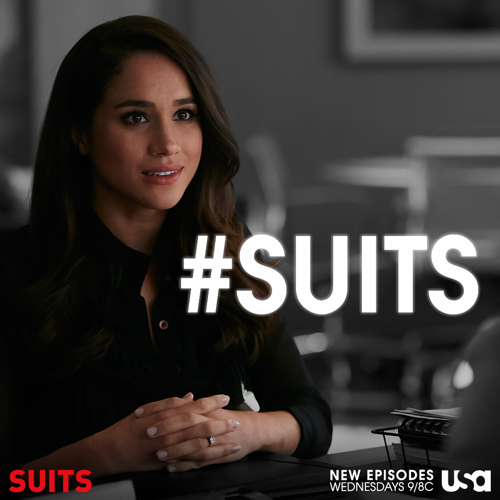 Tonight on the USA Network their critically acclaimed drama, Suits returns with an all-new Wednesday,  February 15, 2017, episode and we have your Suits recap below. On tonight’s Suits season 6 episode 14 called, “Teeth, Nose, Teeth,” as per the USA Network synopsis, “Harvey (Gabriel Macht) and Mike (Patrick J. Adams) walk a fine line when they partner on a class action; Louis (Rick Hoffman) needs Rachel’s (Megan Markle) help impressing a client during an annual presentation and Donna and Benjamin refine their product.”

Tonight’s episode of Suits kicks off with Mike and Harvey chatting about their latest scheme. They are going to sue Velocity Data for a huge chunk of change to drive their stock down, and in exchange, Mike will get in to the bar exam. It’s totally illegal to sue a company for personal gain, so Harvey wants Mike to find a way to run it through the legal clinic.

Louis is at home with his girlfriend Tara, they’re looking through his old photos and yearbooks and getting to know each other better since they rushed in to an engagement. The next morning, Mike heads to work at the legal clinic and gets all the case files he can find on Velocity Data. He enlists the help of Oliver to dig up any dirt they can find on the company.

The next morning, Mike heads to work at the legal clinic and gets all the case files he can find on Velocity Data. He enlists the help of Oliver to dig up any dirt they can find on the company.

At the office, Louis corners Harvey about their client Couture Apparel. Apparently Jessica used to sit down with their CEO Carly Donahue every year and give them a legal analysis, and it’s time for the analysis, and Louis and Harvey are going to have to do it themselves. Harvey grumbles that it sounds like a “dog and pony show” and he wants no part in it. Harvey reluctantly agrees.

It’s not long before Oliver has the smoking gun that Mike needs against Velocity Data, claims from employees that they were injured on the job at their Hazelton Mining Company. Mike tracks down a man named Stamos and learns that all of the miners contracted diseases from working down under the ground and they got less than 50,000 to split between them all. After some pressure, he agrees to help Mike file a new lawsuit.

Rachel corners Harvey, she knows that he and Mike are up to something and she is panicking that he is going to wind up back in prison. Harvey promises that if things start to go sour he will pull the plug.

Donna and Benjamin are still working on “The Donna.” Donna wants the gadget to be more like her, not just repeat her phrases, but to also have Donna’s emotional intelligence.

Mike heads to Velocity Data and meets with the CEO, Palmer. Palmer reminds Mike that they have non-disclosure agreements, and if the former employees break them, Palmer is going to take them to court for every penny they are worth. Mike lies and tells Palmer that Pearson-Spector is working on the case with him.

When Harvey hears that Mike dragged their firm in to it, he’s not thrilled. Mike explains that he has over 150 men that are dying from lung cancer, and he needs his help. Harvey agrees, and decides to let Mike use the Pearson-Spector associates.

When Nathan sees Mike and Oliver boxing up their folders and heading to Pearson to work on the case, he is furious. Nathan and Mike exchange words in the office, Nathan can tell that Mike is up to something shady, and he’s going to figure out what it is eventually.

In the other room, Oliver and Mike are pulling an all nighter and drafting 150 individual suits for the class action lawsuit against Velocity Data. Palmer isn’t going to know what is going to hit him. Mike’ starting to feel guilty about lying to everyone about the lawsuit. He heads to Harvey’s office to vent, he explains to Harvey what happened in the court room with Oliver and why he decided to sue Velocity so that he can get in to the bar.

Palmer is shaking in his boots after Mike and the associates file 150 individual lawsuits against his company. He offers to settle for $100 Million, and Mike scoffs that’s not even an offer. Later, Palmer shows up at Harvey’s office, the jig is up. Palmer did some research and learned that Mike just got a meeting with the ethics board, he knows that they are working with Seidel to try and bankrupt his company. And, it gets work, apparently Seidel wasn’t completely honest with Harvey about his beef with Palmer and Velocity Data.

Katrina and Rachel put on one heck of a presentation for Louis and Carly Palmer, they actually hire a French chef and include a 9 course meal. But, after Carly leaves, she calls Louis and says that the firm is fired – she’s furious that Harvey didn’t show up.

Oliver knows that Mike is scamming him, he corners him and demands to know the truth about the lawsuit. Mike finally confesses that they are doing it so that he can get in to the bar.

Louis is devastated that he lost the firm’s biggest client. He heads home and Tara has all of her highschool yearbooks laid out and is waiting for him so that they can get to know each other more. Louis admits that he had a bad day – Tara is all ears and tells him to spill.