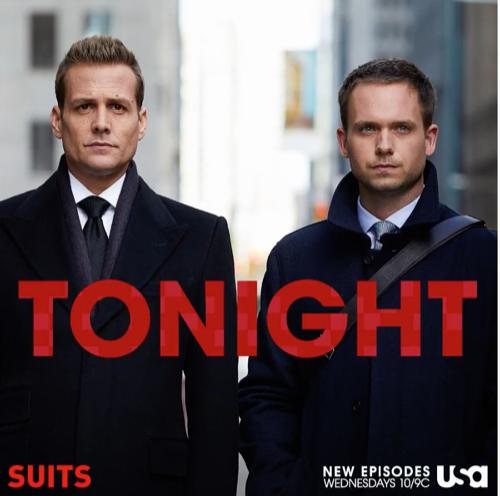 Tonight on the USA Network their critically acclaimed drama, Suits returns with an all-new Wednesday,  February 22, 2017, episode and we have your Suits recap below. On tonight’s Suits season 6 episode 15 called, “Quid Pro Quo,” as per the USA Network synopsis, “When Mike’s (Patrick J. Adams) class action hits a snag, it might cost him more than the case; Harvey, (Gabriel Macht) Louis (Rick Hoffman) and Rachel (Megan Markle) consider getting their hands dirty; and Donna and Benjamin seek an investor.”

Tonight’s episode of Suits kicks off with Mike at the office, late at night, he’s surprised to see Mr. Stamos there. Stamos wants to know what the status of the lawsuit is, he’s furious when he learns that Palmer offered $100 Million and Mike didn’t take it.

Donna marches into Benjamin’s office and tells him that “The Donna” is ready – the little gadget just expressed empathy. Benjamin is thrilled, he wants to start talking to investors. Donna reassures Benjamin that she is getting them some meetings with some high-profile investors.

Harvey shows up at Mike’s doorstep – he announces that Seidel screwed them, and they don’t have to tank Velocity stock anymore. So, the good news is that Mike can get into the bar and be a certified lawyer. The bad news is that Palmer knows what they are up to, and they have to drop the lawsuit. Mike doesn’t want to let Stamos and his men down, he says that he is carrying on with the lawsuit and he doesn’t care about the bar anymore.

Harvey won’t take “no” for an answer, he’s determined to extort Seidel and find a way to keep the lawsuit going AND get Mike into the bar. Mike snaps at Harvey that it is time to drop it – things are getting way too risky.

In the morning, Rachel finds Mike up at the crack of dawn and sitting in the kitchen. He explains to her that he told Harvey to pull the plug on their latest scheme, he’s not getting in the bar after all, and he can kiss his dreams of being a lawyer goodbye.

Harvey arrives at the office and Donna is waiting for him – she reveals that they lost their biggest client, Couture Apparel. Louis is devastated, he feels guilty, because he blew the meeting. Harvey doesn’t care about the Couture Apparel account, he’s more worried about making sure that Mike gets in to the bar. Harvey pays Louis a visit and tells him that Mike’s deal is slipping through his fingers, he needs Louis’s help.

Donna corners Stu, the stock broker that leases office space from their firm. Donna gives Stu her and Benjamin’s gadget, she tells him that he will be blown away by it and to call her with an offer.

Louis and Harvey meet up with Jerry, the shady hacker Louis has worked with in the past. Harvey explains the situation, they are trying to track down the woman that slept with Seidel and was blackmailing him because they need leverage. The problem is, they have no idea who she is. Jerry announces that he knows exactly who she is, and he triples the price of his services.

Harvey pays Rachel a visit, he explains that Mike told him to pull the plug on their deal and he won’t get in to the bar. Harvey knows that Mike will never be happy if he’s not a lawyer and Rachel agrees, she reluctantly agrees to help Harvey with his latest scheme. He tells her to get dressed up and meet him at an address in an hour.

Louis is freaking out, all of their clients are submitting forms to have their counts analyzed after Couture Apparel pulled out. And, Palmer is behind it. They have no choice but to pull out of the lawsuit. He shouts at Harvey that it is time to save the firm, they can’t risk their livelihoods over Mike’s case, or else they won’t have an office to work at anymore.

Mike shows up at Palmer’s office, he reveals that he withdrew his application from the bar and he is still moving forward with the lawsuit. Palmer laughs in his face, he knows that Harvey pulled out and Mike won’t be able to carry the suit out without a big firm backing him. Palmer offers Mike $10 Million, which is not even close to the $100 Million that Mike’s client expects.

Harvey and Rachel track down a woman named Mrs. Cromwell at a hotel bar. She’s a head hunter, companies hire her to seduce men and convince them to sell their software to her. And, Palmer hired her to go after Seidel’s technology. They corner Cromwell and demand to know how many times Palmer has hired her. Harvey threatens Cromwell, if she doesn’t cooperate with them, then he will go public with her shady business.

Stu takes Donna out for drinks – he says that he will invest in The Donna, but he wants 90% ownership. Stu is going to invest his own money, and he warns Donna that these are the best terms that she can get. Donna laughs in his face and says she can do way better.

Mike storms in to Harvey’s office, he’s furious that the firm pulled out of the lawsuit. Harvey explains that they had no choice, Palmer was ruining their client base. Harvey explains that they can still get a settlement from Palmer and Mike in to the bar, because he and Rachel tracked down Palmer and they have leverage to blackmail him now. Mike is livid that Harvey dragged Rachel in to this mess and screams that he had “no right” as he storms out.

Mike heads home and confronts Rachel – he’s upset that she went behind his back and got tangled up in Harvey’s illegal mess. She snarks that forgiveness is easier to ask for than permission. Rachel couldn’t stand to see Mike be miserable the rest of his life because he didn’t get in to the bar.

Donna has set up a day full of meetings for herself and Benjamin to pitch their gadget to potential investors. She lays it on thick and gives them full-blown Donna. After the meeting, Donna hears the investors talking – apparently they only took the meeting as a favor to Harvey, and the investor snarks that there is no way he will ever get in to business with a secretary.

Mike has a change of heart, he meets up with Harvey first thing in the morning and tells him that he is in. Mike wants to be a lawyer, and he doesn’t care how they do it or how many laws they have to break.
Mike and Harvey meet up with Palmer – they show him everything they have on Cromwell, phone calls, meetings, dates, and proof that Palmer had her on his payroll. They threaten to go to the feds, and have him arrested for corporate espionage if he doesn’t settle with the minors and stop trying to come between Mark and the bar.

Donna is devastated by getting shot down by the investors. She tells Benjamin that she is dissolving their partnership and doesn’t want to slow him down, Donna thinks he will be able to get investors without her. Benjamin gives Donna a pep-talk, they are partners, and there is no way that he is leaving her behind.

Mike shows up at Seidel’s doorstep – again. Mike explains that he needs him to get him back in the bar, and in exchange, Harvey and Mike will make sure that he gets every penny that Palmer owes him.

Donna swallows her pride, she pays Stu a visit and wants him to reconsider his office. She realizes that it’s a shark tank out there, and Stu was the only potential investor that treated her like an equal and didn’t talk down on her. Stu is happy to go in to business with her and they shake on it.

Harvey and Mike have drinks to celebrate winning Stamos’ lawsuit for the minors and getting Mike back in to the bar.

Unfortunately, Louis’ night isn’t going so well. Tara pressures him about how his day was at work – he finally confesses that sometimes he has to do bad things at work, and he even blackmailed Harvey in to making him a partner at the firm before. Their conversation turns in to a major blow-up, and Tara storms out and announces she is sleeping at her house.