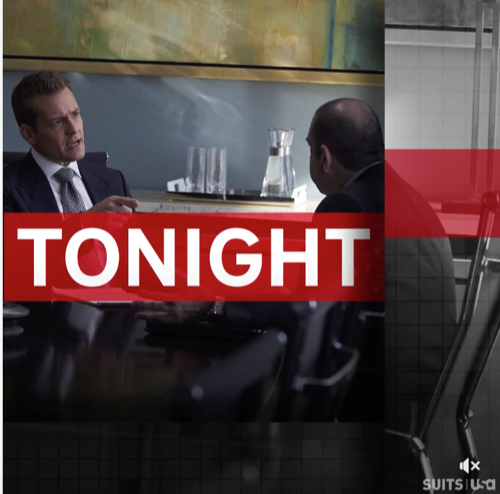 Tonight on the USA Network their critically acclaimed drama, Suits returns with an all-new Wednesday,  July 19, 2017, premiere episode and we have your Suits recap below. On tonight’s Suits season 7 episode 2 called, “The Statue,” as per the USA Network synopsis, “Harvey (Gabriel Macht) butts heads with his partners over a bold move; Mike (Patrick J. Adams) pursues a pro bono case with the legal clinic and Donna’s actions raise tough questions at the firm.”

Harvey wakes up next to a smiling Paula. Louis role plays with his therapist, pretending that he is Tara as he apologizes. Louis stops talking. It’s not about Tara, it is about the baby. His clock is ticking. The doctor reminds him that he has all the time in the world. His idol Tony Randall fathered a child at 77. Louis immediately feels better. He asks the doc to clear up his afternoon the following day to talk about it some more. He can’t wait another week to talk about it.

Mike meets with a client, whose wife died. He is having trouble trying to get the insurance money. If he doesn’t get them to pay out the claim, he and the kids will lose the house.

Donna is moving her things around now that she is a new partner. Katrina comes in. Donna tells her the news. Katrina takes it well, giving her support.

Harvey meets with Donna. She has written a press release announcing her partnership. She is ready to inform the firm, but Harvey needs time. She has noticed he is seeing his shrink again. She asks him about his panic attacks. He tells her he is fine. He leaves the room with Donna looking disappointed.

Mike pays a visit to the insurance company. He demands payment. The rep laughs at him. Her hands are tied. She is willing to go to court.

Harvey goes to visit Alex. He wants to talk to him about coming to the firm. Alex wants his name on the wall.

Mike is in court. He thinks it is unfair that the insurance company won’t pay out because his client lied about smoking. She died in a car accident. The lawyer for the insurance company points out that she lied on her application and Mike lied to for 3 years about being a lawyer. The judge rules that Mike has a case, but keeping his prior record out of the case isn’t going to happen. Mike talks to the lawyer after leaving the court room. He tells Mike that the jury isn’t going to trust him.

Harvey, Donna and Louis meet. Harvey wants to hire Alex to get a big client. Louis is not on board with putting Alex’s name on the wall.

Louis visits Gretchen. He tells her about Alex. He wants Gretchen to dig up some dirt on Alex. She tells him that there is more than one way to skin a cat. Ahh…he gets it. He is going to get the client on his own.

Mike tells his client about his past and what they are up against in court given Mike’s past.

Donna visits Harvey. She thinks he is jumping to decisions. He tells her he is not. He is being decisive about Alex. She felt like she couldn’t talk at the meeting since he and Louis were so wrapped up in their dispute. He tells her that if she had the balls to ask to become a partner she needs to have the balls to talk up in meetings.

Mike is sitting at the table at home, relaxing. Rachel comes home. She wants to know what happened with his case. He tells her. He wants her to take over the case. She accepts.

Alex calls Harvey. He is angry – why is he hearing that Harvey is trying to pouch his client. Harvey realizes that it is Louis. He heads to the office to confront Louis. He accuses Louis of being jealous. Louis accuses him of watering down the firm. Louis reminds him that he needs everyone’s vote and he won’t get it.

Rachel comes into Harvey’s office. She asks to take Mike’s case. Harvey says no. He doesn’t have time to talk anymore – he has a plane to catch. Harvey gets off the plane to calls from Mike.

Mike is mad that Harvey told Rachel no. Harvey wants Mike to find a reporter and take care of the narrative. Paint himself as the hero.

Harvey meets with Jessica. Louis has already filled her in and she thinks Harvey is making a mistake. He gets angry. She tells him to take her name off the wall and so what the hell he wants.

Paula calls as he heads home in a limo. She has to reschedule. He is okay with that. She wants to know what is going on. He starts to tell her, but insists he feels better already now that they have spoken.

Mike wants Rachel to get records from the insurance company that they have a policy of not paying out. She tells him that she can never get them to share information like that. Mike reminds her that she knows a corporate spy. They go to meet her. Rachel cost her millions prior when word got out to some about her identity. She wants $50k to get information. Mike agrees.

Louis meets with his therapist. He wanted Harvey to treat him like a friend and a partner. That is why he is so angry about Alex.

Katrina wants to talk to Harvey. She is upset about Donna becoming a partner. She came back to the firm to get on track to become a partner. Now it appears that becoming partner is different. He assures her it isn’t before politely dismissing her.

Harvey meets with Alex. He can’t offer him a partnership, but a place at the firm. After some hesitation and anger, Alex accepts.

Mike meets the insurance company’s lawyer on the street. He shows him documentation, proof that the insurance company doesn’t pay out. He wants the lawyer to make a statement to a reporter that he never wants to up against Mike again. He also wants a payout to his client.

Louis finally shares his feelings with Harvey. The two make amends. Harvey pays Donna a visit next. She can’t be partner. She isn’t a lawyer. Fine, she tells him. She wants to be COO. He agrees. They shake on it.

Mike meets with his reporter. He is going to tell him everything. Harvey calls Jessica to apologize. He wants her to stay. She agrees. He tells her about Alex. And he does plan to drop Jim. Jessica agrees and she thinks he is ready, finally!