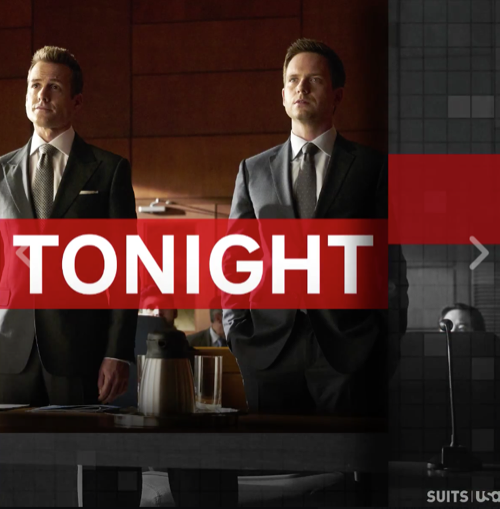 Tonight on the USA Network their critically acclaimed drama, Suits returns with an all-new Wednesday,  August 2, 2017, premiere episode and we have your Suits recap below. On tonight’s Suits season 7 episode 4 called, “Divide and Conquer,” as per the USA Network synopsis, “Harvey, (Gabriel Macht) Louis and Donna must get on the same page—and fast—when Bratton Gould comes after PSL for poaching an attorney. Mike (Patrick J. Adams) and Rachel struggle to make time for their wedding plans.”

Robert and Rachel meet at Harvey’s to see the place as Rachel and Mike might have their wedding there. Robert is upset over Rachel’s reluctance to plan her wedding. Rachel says that her and Mike are busy with work. Robert points out that if they are too busy for wedding plans what are they going to do when they do marry?

Louis is looking for Stephanie. Donna comes out of her office to tell him she fired her. Louis wants her back. She was the best 4th year. Louis loses it. Donna blames it on Tara. Louis says this is about Harvey running the firm into the ground. Harvey needs to be careful or he won’t have a kingdom to rule over anymore.

Harvey brings Mike a file. It’s a pro bono. Harvey wants to make sure Mike and Alex are on good terms. Donna is sitting in Harvey’s office when he returns. She wants him to know that no-one is happy. Donna wants him to pull his head out of ass and realize he has a problem.

Harvey meets Jessica for lunch. Harvey gives her the rundown about his an angry firm. Meanwhile, Rachel tells Mike about her talk with Robert. She has made some appointments for their wedding. Mike tells her he is busy tonight. She can go. She will have a thousand questions. She agrees.

Harvey meets Robert on the golf course. He needs a favor. Robert tells him that Bratton Gould is coming for him. He can help, but it’s been a thin quarter.

At court, Oliver tracks down Mike. He wants to talk about the pro bono prisoner case. Mike tells him he can’t talk. Oliver needs help to move the case forward. Mike tells him again, he can’t help. But Oliver needs to come up with something to get into the room. It dons on Oliver, the doctors time card. He needs to prove that the doctor wasn’t around to save the prisoner’s life.

Harvey tells Donna about Bratton. They are suing Harvey’s client for patent infringement. They find Louis, who gets angry at the sight of Hrvey. Harvey tries to tell him about the situation but Louis flies off the handle. He isn’t listening to Harvey. “Fine,” Harvey tells him before walking off and sharing that he thinks someone in their firm is giving Bratton information. Donna and Louis look up stunned.

Alex wants to talk to Louis. Alex wants to help Louis before he meets with his client. Louis turns him down, telling him for all he knows Alex could be Bratton’s spy.

Harvey is in court for the patent case. Mike shows up to help. Harvey calls it a joke. Mike intervenes, telling the judge that Bratton is angry because the firm has nabbed some of their biggest clients. At the same time Louis meets with his client who is feeling neglected. Alex steps into the room and tells the client that Louis has his best interest in mind. After Alex’s quick speech, the client is willing to stick with the firm for now. Harvey and Mike leave the court happy. Mike wants a raise! Harvey laughs. Donna told Mike Harvey needed the help. Harvey is glad he stepped up.

Louis and Alex are out to eat and getting along.

Louis tells Alex there was a time he thought about leaving the firm. Louis wants Alex to come to him if he ever feels overlooked. They toast.

Donna tells Rachel that Stephanie is working at Bratton. She may be the one leaking information. Donna demands Rachel go to her and get her back. Donna needs her to do it so Donna doesn’t look like she wasn’t ready for her new position. Rachel tells her she will go.

Harvey heads into Louis’ office. Louis tells him that things are good with them. Harvey tells him that court went well. There is something they need to do together.

Rachel finds Stephanie. Rachel wants to know if Stephanie is the rat. Stephanie tells her that she would never break attorney-client privilege.

Oliver tracks down Mike. He wants to get a beer. Mike tells him no. Oliver is happy, he got a great settlement offer for his client. Mike thinks the number is too high. There has to be more victims. Oliver is done. If mike wants more, he’s going to have to go after them himself.

Rachel calls Donna. Stephanie isn’t the rat. Rachel is late to her appointment, but the planner is willing to meet with her still.

Harvey and Louis show up to see Tommy Bratton. They threaten Tommy to leave the firm alone. Tommy doesn’t care if they threaten him. He’s planning on poaching more of their clients and suing more too. He isn’t going to rest until he gets his way. His firm is 5xs their size.

Mike meets with the prisoner’s father. Mike tells him that if he takes the deal he will never know the truth. Mike tells him that when his parents died his grandmother took a deal she regretted for the rest of her like. Mike wants to get justice and stop these people from doing this again. The father agrees.

Harvey calls Donna. She needs to find the spy. Harvey meets with Robert. He wants Robert to pretend that their firms are merging. Robert doesn’t want to, it’s bad for his firm’s reputation.

Harvey, Donna and Louis are trying to come up with a plan. Alex comes in to the office. He is willing to give Bratton his clients. Harvey says no, they aren’t giving up.

Mike meets Oliver. Mike tells Oliver the father turned down the offer. Oliver is happy because he has found a ton of new information. A possible civil suit in the making but he needs Mike. Mike tells him he can’t help.

Alex knows how to take down Bratton. But he can’t tell Harvey the details he has to do it alone. Alex arrives at Tommy’s office. Alex tells him to back off the firm. The two share a common secret that could get each of them in trouble. They both sign documents to keep it that way. Alex reports back to Harvey to tell him that the firm is safe. They share a drink. Alex wants to know what they will tell Donna and Louis about the situation and how it went away. Harvey tells him that they will tell Donna and Louis they did what they had to do.

Harvey goes to see Donna. He tells her to go home and get some rest everything is OK. Donna apologizes for letting him down. Harvey tells her that she has not let him down in the last 12 years.

Harvey calls Jessica. He knows it was her who was the spy. She admits that it was her and she did it because their house was divided and now they have united.

Rachel calls Robert. She tells him that her and Mike are going to pick a date. She asks him about a possible merger. She was excited at the possibility of working with him. He’s happy to hear it. She was happy to hear that he thinks she is a great lawyer.

Mike calls Oliver. He wants to help with the pro bono case!