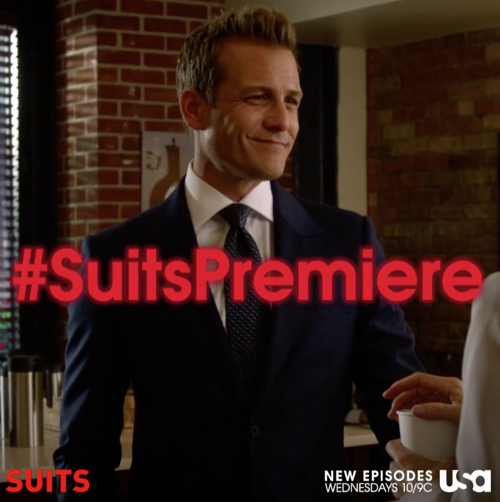 Tonight on the USA Network their critically acclaimed drama, Suits returns with an all-new Wednesday,  January 25, 2017, episode and we have your Suits recap below. On tonight’s Suits season 6 episode 11 called, “She’s Gone,” as per the USA Network synopsis, “Harvey, (Gabriel Macht) Louis (Rick Hoffman) and Donna  (Sarah Rafferty) plan for the future following Jessica’s departure from PSL; Mike (Patrick J. Adams) learns the difficulties of life for ex-convicts; and Rachel considers her post-law school options.”

Tonight’s episode of Suits kicks off with Harvey tucked in to bed, and dreaming about sleeping with Donna. In his dream, Donna announces that she is leaving Harvey and won’t be working for him anymore since they are sleeping together…just like Jessica left him. Harvey wakes up in a cold sweat.

Meanwhile, Louis is lying in bed with his pregnant fiancé Tara – he’s up all night thinking of baby names. He tells Tara that even though he isn’t the baby’s father, he wants to help name him. Tara reassures him that the baby will be raised as a Litt. Louis rushes off to get ready for work.

Rachel’s dad shows up at her door unannounced, he brought her a graduation gift – it’s a job offer at his firm. He wants Rachel to pass the bar, and he don’t think she can do that with Harvey’s firm on her resume. Rachel turns him down – Harvey’s firm is her family, even if Jessica is gone now.

Mike shows up at Harvey’s house – he has decided that he isn’t going to take Harvey’s offer. Mike won’t be able to look himself in the mirror if he goes back to work in corporate law. Harvey begs Mike to come back, he needs him on his side until they figure out what to do now that Jessica is gone. But, Mike refuses.

Harvey heads to work and Louis is already there with bells on. Louis has good news, between not paying their partners and leasing out the office, the firm is actually flush with cash. Louis and Harvey are plotting their next move – and are shocked when Rachel’s dad Robert interrupts them and announces that he wants to merge with them. Harvey and Louis scoff at the idea, but Robert is sure they will be begging him to merge sooner rather than later.

Mike rides his bike to the legal aid office and informs them that he is interested in a job. He picks up an application, and explains that he isn’t a lawyer but he does have a ton of legal assistance.

Donna stops by Harvey’s office and can tell that he is upset – Harvey fills her in on his fight with Mike. Donna thinks that Harvey should be helping Mike follow his dreams and find a job to “do good” rather than trying to force him to come back at the firm.

Louis is a man on a mission. He’s offended that Robert Zane implied he couldn’t lead the firm and keep the place afloat without Jessica. Louis informs Gretchen that he is going to “steal the ripe fruit out from under Robert’s nose,” he’s going after Robert’s associates. Louis pays his old pal Katrina a visit at Zane’s office, he invites her back to the firm and tells her that if she brings 10 of Zane’s associates with her – he will make her the youngest senior partner at the firm.

Mike is feeling discouraged after filling out his job applications all day and not having much luck because he had to reveal that he is a convicted felon. He stops by the church and the father offers him a job substitute teaching on a temporary basis.

Rachel is starting to question what her father said to her earlier. She gets some advice from a professor about whether or not she will pass the ethics committee portion of the bar. He tells Rachel that it doesn’t look good for her, and if she wants a fighting chance, she will go work at her father’s firm instead of Pearson Spector Litt.

Meanwhile, Harvey takes donna’s advice and sets off on a mission to help Mike pass the bar. He pays his old professor Henry a visit and tries to convince him to testify on Mike’s behalf so that he can practice law legitimately.

Later that night, Rachel learns that Father Walker offered Mike a job as a teacher at the church. She’s disappointed that Mike is giving up looking for a legal job so fast. But, she tells Mike that he is going to make a great teacher.

Mike heads to his new job first thing in the morning, and the class isn’t exactly welcoming. They pass around a copy of Mike’s mugshot and crack jokes about him “dropping the soap” in prison.

Donna gets wind of Louis and Katrina working together to steal Robert’s associates and she warns him that he is poking the bear. Louis doesn’t want to hear it, he is determined to prove himself to Robert.

After getting turned down by Henry, Harvey tracks down Anita and tries to convince her to testify on Mike’s behalf at the ethic’s committee. Anita scoffs at the idea, as far as she is concerned, Mike is the same con-man he was when he went in to prison, that’s how he got out of prison so quickly.

Mike is contemplating throwing in the towel at the school, but after some pushing from Father Walker, he heads back in to the class and is able to make some headway with some of the troubled students. It turns out they have a lot in common.

After class, Mike is thrilled by his progress. Then, Father Walker has bad news for him. He has to let Mike go, some of the parents found out that he has a prison record and they don’t want him teaching their kids.

Louis meets up with Katrina and gets a shock. He learns that Robert Zane is actually not the enemy and he really is trying to help Pearson Specter Litt, Robert apparently waived the associates non-compete fees and wished them luck at the new firm. Louis didn’t have to steal the associates, Zane gave them to him signed, sealed, and delivered.

Robert shows up at Harvey’s office and he is livid that Louis is coming after his firm. Robert threatens Harvey and tells him to shut down Louis, before he shuts down their dying firm.

Mike gets home after a long day, and Anita is waiting on his front steps. Anita reveals that Harvey came to her, and she has no intention of helping Mike. She warns Mike that if she ever gets wind of working in law again, she will come for him. Mike is livid that Harvey contacted Anita, he storms

Mike is livid that Harvey contacted Anita, he storms into the office and confronts him. He shouts at Harvey to “stay out of his life!”

After Mike leaves, Harvey turns his attention to Louis. He freaks out on Louis for going behind his back and trying to poach Zane’s firm. Harvey screams that Louis is “out of his god damn mind if he thinks anyone will ever let him be managing partner.”

Louis is pretty upset, but Gretchen gives him a peptalk. Before Louis’ very brief tenure as manager is over, there is one last thing that he wants to do. He stops by Rachel’s office and formally gives her a job offer as a 2nd year associate at the firm. Rachel is thrilled and accepts his offer, it looks like she won’t be going to work at her father’s firm after all.

Tonight’s episode ends with Harvey alone in this office, Donna stops by and comforts him. Harvey rants that Mike and Jessica are his family, and they both left him. Donna thinks it is time for Harvey to make up with his REAL family, so he can stop depending on everyone at the office so much.