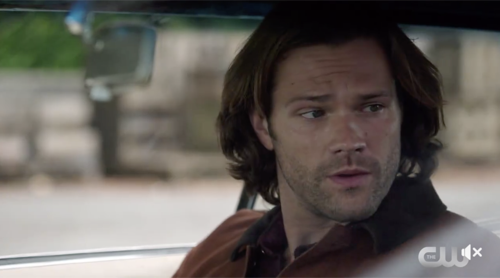 Supernatural airs tonight on the CW with an all new Thursday, October 12, season 13 episode 1 called “Lost and Found,” and we have your Supernatural recap below. On tonight’s Supernatural episode as per the CW synopsis “Season 13 begins with Sam (Jared Padelicki) and Dean (Jensen Ackles) picking up the pieces after the loss of their mother, the demise of Crowley and the heartbreaking death of Castiel. Meanwhile, the birth of Jack leaves the brothers with differing opinions on how to deal with a Nephilim; and Mary, after being dragged into the breach, must learn to survive Lucifer and an apocalyptic world.”

Tonight’s Supernatural recap begins now – Refresh Page often to get the most current updates!
Sam and Dean came across Lucifer’s son on tonight’s episode however the young man appeared to be deeply confused and had lashed out at the brothers when he saw that Dean was going to attack him. But before that, Sam had been trying to communicate with him and he had seen for himself that “Jack” didn’t truly know he was much less who they were. He had just wanted his father and didn’t know how to find him. So Jack had initially called Sam his father and later he had started talking to the drive-through machine because he thought that machine might be his father.

However, the police were eventually called because it had been clear to the people inside the restaurant that he was confused and needed help especially as he happened to be naked. So the sheriff showed up and had tried talking to Jack yet Jack had seen the gun on her hip and had instantly felt threatened. He had been attacked by Dean who tried to shoot him and so that made Jack aware of the danger that guns present. And therefore he had been gearing for a fight with the sheriff when she told him that all she wanted to do was help.

The sheriff had actually been sympathetic. She had wanted to help the young man and had gotten him some clothes. Yet, she had also wanted answers to her questions. She wanted to know Jack’s name, his address, or even someone she could contact, but Jack could only say that his first name and that he was looking for his father because his mother was in heaven now. So the sheriff took his fingerprints because she thought that at least would help identify Jack and where he came from. And so Jack was interacting with her son while the brothers were doing their best to find him.

Sam and Dean had followed the main road hoping to spot Jack and they had also argued in the meantime what with Sam reprimanding Dean. Dean had attacked Jack for no good reason when instead they could have kept him in sight. But Dean wasn’t taking what happened to Castiel or his mother lightly. He was upset and was lashing out himself. He had banged up his knuckles while Sam had been inside a nearby restaurant and he hadn’t explained what happened when Sam attempted to ask.

Sam however had gotten answers from the restaurant. He found out Jack had gotten picked up the police and that they still had him in custody. Although the police had started to wonder about Jack. Jack showed up some of his powers to get free candy bars out of the machine and so the sheriff was questioning what Jack was when he suddenly got a splitting headache. The headache came out of nowhere and it made Jack react violently to pull around him. So he threw the sheriff across the room and was going to tear up the police station when Sam used his stun gun on him.

The stun gun brought Jack down. However, Sheriff Barker had then had questions about Sam and Dean. She wanted to know who they were and so Dean told her everything. He said that he hunts down monsters with his brother and that Jack was a Nephilim which meant he was half human/half angel. So Dean was filling the sheriff in and was finally making her understand the situation when they were attacked. A group had showed up demanding Jack and the brothers had been forced to fight them off, but the sheriff’s son had received a stab wound to the stomach.

The sheriff had called for an ambulance right away and so he’ll be fine in the long run. But Jack had gotten stabbed while the brothers were fighting off the angels and he had been perfectly fine. He said that he had come out big rather than a baby or more vulnerable because his mother had wanted him to stay safe. So Jack started to remember things. He remembered his mother talking to him and he said his father was Castiel because his mother said Castiel was his father.

Yet, Castiel was dead. Dean had tried everything to get Castiel back and had even been told that Castiel was dead for good. So that’s why Dean had banged his knuckles. He had tried praying and, when that didn’t work, he started to destroy things because that was the only way he could cope. And so Dean finally told his brother this when Sam said that maybe Jack could bring everyone back. Dean had told his brother that God was no longer listening and that they had to let go though everything wasn’t official until they had a funeral for everyone.

Sam, Dean, and Jack all said goodbye to their friends. They held a funeral for Castiel, Kelly, Crowley, and Mary because Dean believed Lucifer had killed her the moment the boys had trapped him. Though Dean had been wrong about that. Lucifer hadn’t killed Mary and had been toying with her with the other world. So the boys had given on a mother that wasn’t dead and had decided to watch over Jack because Sam believed Jack could turn out good rather than evil. And maybe he’ll prove to be right about that in the end…