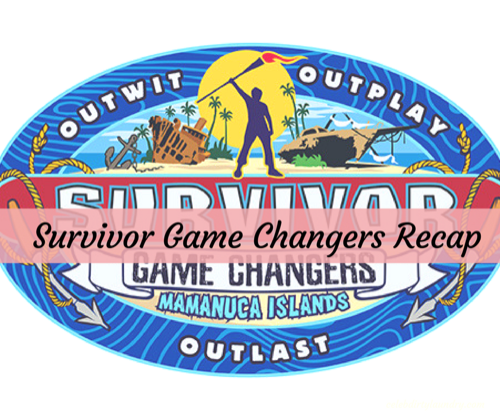 Tonight on CBS their Emmy Award-winning series Survivor: Millennials vs. Gen X airs with an all-new Wednesday, March 8, 2016, episode and we have your Survivor: Game Changers recap below.  On tonight’s Survivor: Game Changers Season 1 premiere called, “The Stakes Have Been Raised,” as per the CBS synopsis, “Twenty of the game’s biggest competitors return to play as the reality series begins its 34th season. In the opener, the castaways arrive at Fiji’s Mamanuca Islands, where two of the game’s legends set their sights on one another and another player introduces “spy shack” 2.0.”

During the 17 years the show has aired it has evolved. Tony created the spy shack, Malcolm has appeared in two prior seasons Sandra is the only person to win the game two times, Cirie was a couch potato but now is a fighter, Debbie has a strength that many underestimate that she uses to her advantage. 39 days 20 people and one survivor will be left standing.

The group drops anchor and is welcomed by Jeff. He tells the group each was chosen because they have proven they are willing to make bold moves. Ozzy tells Jeff of the dreams he has had since losing the game during his season. JT is the only contestant who has never won the game. Zeke is still such a fan of so many of the other players.

The teams are told to get all of their supplies and head to the island. They also have to untie a rope that is underwater to release a toolkit that can used by the whole team. The first team to release the kit will get to keep it. And the game begins.

Ozzy immediately jumps into the water for Nuku but no one from Mana even tries to untie the rope. Caleb finally makes an attempt but is so far behind Ozzy. Ozzy gets the kit for the Nuku Tribe and his teammates also got live chickens for the group to have on the island.

While the Mana team works to put their camp together Tony runs off to look for an idol. Caleb and Sandra are sent to keep an eye on him.

Zeke feels like he has the best team ever. He thinks they can’t be beat. Nuku examines all of the items in their tool kit and can’t believe how lucky they are to have it. Sierra found the legacy advantage while the team was still on the boat and is very excited to have this advantage.

Cirie and Ivy are on the same tribe and she knows there will be trouble. Ivy says the past is the past but she isn’t buying it. Tai doesn’t want to get pulled into this drama.

Day two starts with Tony filling the water for his team mates and also begins digging an underground bunker. Troy catches him digging but doesn’t say anything about it. Troy shares what we saw with the rest of the tribe.

The first immunity challenge of the season requires each member to race to a raft and paddle out to a key. They then must race back and use the key to unlock pieces to complete a puzzle. There is a twist this season. If there is a tie they will have an open discussion and then if there is no unanimous decision the two in the tie are safe and everyone else must pull rocks.

The teams jump on their rafts and quickly get to the platform. Ozzy swims out for the key for the Nuku tribe. Hali swims for the Manu tribe. Ozzy gets his key first closely followed by Hali. The Mana tribe gets their locked opened but then it is back and forth between each tribe being in the lead. The tribes are dead even as they work through the second puzzle. Zeke and Cirie finish first and earn immunity for the Nuku tribe.

Ciera is so disappointed that she let down her tribe and is nervous she may be the first voted out of the game and off the island. Day three begins with the Jeff and the whole tribe feeling down because of their loss. Tony wants to decide who the weakest link in the tribe is. Several people believe it is Sierra. Some are bothered by the fact that she voted her mother off during her season. Everyone decides that Sierra will go but they make Sierra think that Makayla is the one everyone is voting off.

Tribe Mana enters the voting circle and talk about Tony’s crazy antics. Jeff asks if Sandra is up to be voted out since she has won twice before but she says her team mates love her too much. Sandra says the first three days have been very unknown and the voting begins.

The first vote is for Makayla and all of the remaining votes are for Ciera. She is the first contestant voted off of season 34 of Survivor.

Tony approaches Aubrey to try to form an alliance. They also want Sandra and Malcolm to join them. Sandra is all in. On Day 4 the Nuku tribe starts naming their chickens and Tai becomes response for the chickens. The others immediately start criticizing him for feeding the chickens too much of the tribes corn.

In the middle of the night Tony continues to dig his spy bunker but as he works he sees Sandra and Malcolm talking. He hears his name mentioned so he joins them but they both deny talking about him. They believe Tony is paranoid and they may have to vote him out if he becomes a liability.

Cirie believes Ozzy and JT are coming after her so she tries to align with Sarah. Sarah tells Cirie she has her back but then tells the camera her word is not her bond. Zeke is the next person on Cirie’s list of possible alliance members. Zeke also feeds her a line but isn’t really committed to her. Debbie and Cirie talk and Debbie does not trust Cirie. It seems no one really wants to partner with Cirie. They all think she will have a target on her back.

Sandra works to turn the other tribe members against Tony. Jeff can’t believe how fast she got everyone on board. Malcolm and Caleb aren’t sure if they should join Tony or Sandra but they both tell Tony they are on his side.

The second immunity challenge of the game involved six members of each tribe swimming out to a platform where they must get a very heavy snake that they then have to bring back to the other tribe members who have to untie it and use the tiles to figure out a combination. The winning team will also get a fishing kit to use back at camp. Cirie sits out for the Nuku tribe.

The teams are neck and neck with no really leader. But Nuku pulls ahead and starts to lift the snake out of the cage. Mana finally gets the snake free but Nuku are already are at the shore with their snake. The second phase of the tribe Nuku start untying the snake so that they can get the combination lock opened. The lock opens easily and Nuku starts the last leg of the challenge. Mana finally gets the snake to the land and begins to work on the lock.

Malcolm kicks butt and closes the gap and it is now even with the other tribe. But JT finally wins for the Nuku tribe. Mana tribe will once again face tribal council.

Makayla complains that she is be discounted by the other players on her team. Sandra has the votes to get rid of Tony but they all make him think Aubrey is the one to go. Tony tries to get the votes to send Sandra home and he knows Makayla is the key. As they head to tribal council it is anyone’s game.

As the tribe talks several agree they can’t send home physical strong players. They have lost the first two challenges and need to start winning. Based on everyone’s input it seems obvious Sandra or Tony will be voted off. Many sing Tony’s praises and Sandra looks nervous and the voting begins.

The first vote is for Aubrey, then Tony, then Aubrey then Tony. Tony gets all of the remaining votes and is the second person voted off the island.THE END