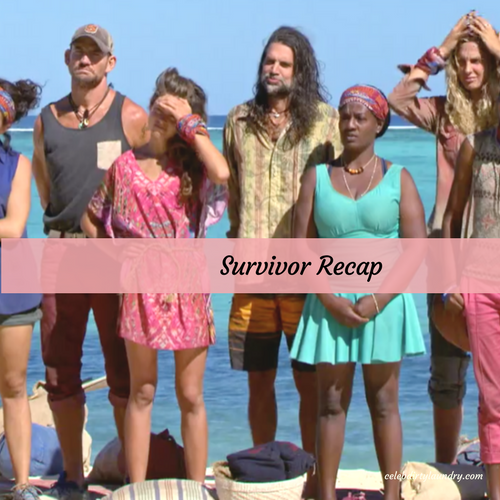 Tonight CBS airs Season 34 Episode 4 of Survivor: Game Changers, April 12, 2017, and we have your Survivor recap below. On tonight’s season, 34 episode 8 & 9 called “There’s a New Sheriff In Town,” as per the CBS synopsis, “In a 2-hour double episode the two tribes merge and a twist in the game leaves two castaways out of a celebratory feast.”

Tribe Nuku faces the consequences of the last tribal council. Tears are shed as Zeke thanks everyone for their support. He didn’t share that he is transgender with everyone before because he just wanted to be Zeke. He was truly touched but it is also a game with a million dollar prize that he wants to win. The two tribes meet on the shore and notice a huge buffet of food. Everyone is starving and wants to eat immediately. Before they merger, one person from each tribe must volunteer not to eat from the buffet. Culpepper steps up for team Mana. Tai will do it for Team Nuku.

The rest of the castaways eat to their hearts content. Everyone is grateful to Culpepper and Tai. As the rest of the contestants eat Culpepper and Tai talk strategy. They are on the same page. Debbie pretends to be drunk so she can cut loose and get closer to the other tribe members. Debbie apologizes to Brad and they make up. Zeke shares what happened at tribal with the members who weren’t there. Ozzy, Culpepper and Troy talk of an alliance. They would like to see Mikayla be the first to go. Everyone seems to be on the same page.

Zeke changes paths and thinks Mikayla could be useful to his alliance. He gets Cirie, Andrea, and Sarah to form an alliance with him. He needs Mikayla on his team. Mikayla reaches out to Cirie who encourages her to keep her anger in check. The tribe members gather for the first individual immunity challenge. They will have to stand on their toes with a block on their head as long as possible. The last person standing wins.

Hali, Troy and Zeke are out almost immediately. Cirie is out next, followed by Debbie and then Mikayla. Five minutes into the challenge and Ozzy drops out. Aubry is out next and five members remain. Culpepper is out next followed by Sarah and then Sierra. Tai and Andrea are face to face but Tai drops out and Andrea is the first woman to win this challenge. She will have immunity at the next tribal council.

Everyone congratulates Andrea and she thinks Mikayla has to go. She thinks Hali must have an idol so they need to vote Mikayla. Cirie wants to keep Mikayla so tells her to vote Zeke. Council starts and Andrea encourages everyone to look at who is the true threat. Hali and Mikayla both feel like they are in the dark. Debbie thinks now is the time to flush out the idol. Hali says she will shake down now to prove she doesn’t have an idol but they have to ask her to do it. No one asks her to do it so voting starts.

Mikayla is grateful to Cirie for saving her. Zeke, Cirie and Andrea decide that Brad and Sierra are their next targets. However, as soon as Zeke leaves that group he says he thinks Cirie or Andrea need to go. He is playing both sides. The reward challenge starts with members swimming to a net that they must untie and bring back to shore. Once back on shore they must remove several fish from the net and place them on a hook. The fish then must be carried to a box and placed together to form a puzzle. The prize is a day of luxury including a shower, burgers and apple pie. Zeke, Debbie, Ozzy, Tai, Andrea, and Troy win the challenge and enjoy a spa day.

Cirie is in tears after the loss. The winners of the challenge enjoy the showers and food. Tai runs around naked and everyone laughs and has fun. Zeke works to get Debbie and Tai on his side. Debbie is not sure what to think. Day 24 starts with the next immunity challenge.

Each player has to hang on a pole as long as possible. Ozzy has won this challenge twice. Sierra has competed in this challenge once before and lost. Cirie is out first followed by Culpupper. Aubry and then Debbie are out. Zeke falls next followed by Sierra. Troy then Sarah falls. 20 minutes into the challenge and 4 are left. Mikayla falls next. 40 minutes in and Andrea starts to struggle and falls. It becomes a showdown between Tai versus Ozzy. One hour and 30 minutes and Ozzy and Tai keep at it. Ozzy falls and Tai wins immunity.

The politicking starts immediately after the challenge. Zeke targets Andrea but the other players don’t trust him. Everyone starts talking and begins to realize Zeke needs to go. Then Debbie throws out Ozzy’s name. It will come down to Zeke or Ozzy. Debbie has an extra vote from her time in exile but isn’t sure if she should use it now. Zeke expresses worry at council and it is time to vote. Debbie plays her extra vote. 6 votes Ozzy, 4 votes Zeke, 1 vote Sierra and 1 vote Aubry. Ozzy is voted off the island and goes home.