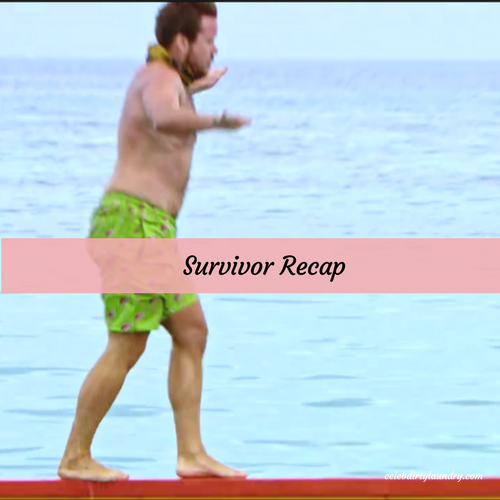 Tonight on CBS Survivor: Game Changers airs with an all new Wednesday, April 26, 2017, Season 34 Episode 10 and we have your Survivor recap below. On tonight’s Survivor season, 34 episode 10 called “A Line Drawn in Concrete,” as per the CBS synopsis, “Friends become enemies when one castaway is caught trying to sabotage another’s game.”

Eleven castaways are left. Debbie is thrilled with the outcome of tribal council. She thinks her alliance is iron clad. Zeke realizes that he was close to going home and he needs to work with the majority alliance to stay on the island. The tribe members learn that they will be divided into two teams of five to compete in the reward challenge. Each team member must make it through and obstacle course in the water. The winning team is taken by sea plane for a picnic with a huge variety of food. Culpepper’s team is made up of Debbie, Aubrey, Sierra, and Andrea. Cirie is the second captain and chose Tau, Zeke, Sarah, and Troy. Mikayla was not chosen so does not get to compete or have a chance to win.

Mikayla sat on a bench during the challenge and didn’t see the secret advantage that was under her set. Sarah notices it and gets it for herself. Cirie apologizes to her teammates for losing the competition and thinks they are all good people. Sarah’s advantage means she can steal a vote from someone during tribal council. As the winners enjoy their meal Culpepper asks Sierra what happened between her and Zeke. Sierra doesn’t know what happen but Zeke turned on her. Cirie and Sarah talk trying to figure out how to get six votes.

The immunity challenges starts and each member must pull on a rope to keep a table stable. They must spell out “immunity” using blocks on the table but it the blocks fall they have to start again. Troy and Andrea are neck and neck. Sierra is right behind them. Sarah drops her blocks and has to start over. Andrea drops and has to start over. Troy is still in the lead. Culpepper is close behind but then drops. Troy wins immunity.

Day 26 starts with everyone congratulating Troy on his win. Everyone immediately starts politicking about who should go home. Several people want Mikayla because she is very annoying but most the power six (Debbie, Sarah, Culpepper, Tau, Troy, Sierra) decide Andrea will go first. However, Sarah realizes she isn’t high in the order in the group. She may need to jump ship and work with Andrea and Zeke. Sarah then talks to Sierra and realizes maybe she should stick with the power alliance.

Tribal council starts and Hali and Ozzy return as the first two members of the jury. Cirie thanks everyone again for their support during the reward challenge. Andrea expresses her fear that she will go home. Several people talk about how the strong six are in control and it is obvious Debbie is the leader of that group. Sarah is the wildcard of the night. Jeff begins to read the votes. First vote goes for Andre then Debbie. It goes back and forth until it is tied 5 to 5 Andrea versus Debbie. The final vote is for Debbie and she is sent home. Several people look shocked.