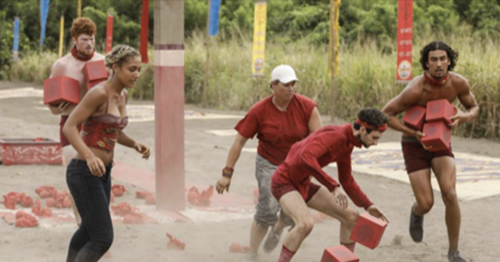 Tonight on CBS Survivor: Heroes vs Healers vs Hustlers airs with an all-new Wednesday, October 18, 2017, Season 35 Episode 4 and we have your Survivor recap below. On tonight’s Survivor season, 35 episode 4 called “I Don’t Like Having Snakes Around,” as per the CBS synopsis, “Another castaway is voted out of the game. Host Jeff Probst will ask the castaways to drop their buffs and randomly pick a new one, causing new and old friends—or rivals—to cross paths.”

It’s Day 9 and the tribes gather as they learn Patrick was voted out at last Tribal Council; everyone is told they are switching tribes, they are told to go to their spot on the map and say hello to their new mates.

Their first reward challenge as new tribes happens right away; 3 members of each tribe will be attached by rings to a braided rope, on Jeff’s go they will work together to untangle it. Once they have unraveled the rope, they will toss the ring to hook a sleigh and bring it back to them; the 2 remaining tribe members will use the pieces on top to solve an upright puzzle. They are playing for peanut butter, jelly and bread; there are enough sandwiches to eat right away and enough peanut butter, jelly and bread to make sandwiches for a while PLUS individual bags of potato chips for each player. This is a winner take all challenge with no second place!

Yawa wins the big reward and is told to enjoy the afternoon. Soko and Levu are sent back to camp empty-handed, as Jeff tells them to get to know each other.

Yawa tribe, Ben says there is comfort in knowing they work well together; 3 healers, 1 hustler and a hero. He worries about the target on him and needs to earn respect and trust to keep his own butt in the game. Jessica opens her chip bag and inside is the words “secret advantage”, she walks off while the rest are in the water to take a closer look.

She is given the power from blocking one person from voting at the next tribal council; it will be sent anonymously to someone in her tribe. If they win immunity, she must send it to someone on the losing tribe. She immediately tells Cole and Ryan and Cole turns and tells Ben and Lauren, hoping this information will make him more trustworthy. Lauren plans to use his secret to her advantage.

Soko tribe settles in, Ryan is happy that Chrissy is in the same tribe as him because he was the one who gave her the immunity idol on Day 1. As they go for a walk, Ryan reveals to her that he was the one who chose to save her; she thanks him as he says he picked her because of the vibe and wanted to work with her. Chrissy gives her word that she will “Pay him back.”

Levy tribe is 2 heroes, 2 healers, and a hustler; Desi says it would be easy for the 4 of them to vote Devon out, but she wants to work with him because he is the swing vote. Ashley says she didn’t want Alan on the tribe because he has proven to be the wild card; she thinks that she can trust in the fact that Alan doesn’t want to go home and tells him the past is in the past.

Joe is not as confident with the swap, he does have the idol but he isn’t taking any chances. Devon is the swing vote and needs him on his side. He talks to Devon lying that the healers want him to be out, saying he needs to be deceitful to play the game. Devon doesn’t trust him but finally, sees he might actually be going home.

The following day in the Yawa tribe, Lauren worries that she and Ben are outnumbered and they need to get Dr. Mike to join them. Mike learns about the advantage from Lauren, he goes to see Jess and Cole in the water where Jessica’s heart sinks when she learns everyone knows but Cole denies saying anything. Mike leaves and Cole swears he didn’t tell Lauren but admits he mentioned it to Ben. Jess feels seriously burnt by him and says he should have protected that knowledge, she is hurt feeling she made a poor decision and how will she move forward in the game now.

Everyone arrives for the Immunity Challenge, today’s challenge they will race out, grab large crate puzzle pieces, maneuver that crate through a table obstacle and under a net, once they reach the finish, they will unlock their second set of puzzle pieces. They will then arrange those pieces so that each intersection is the same color; the first 2 tribes to finish are safe from the vote and win immunity.

Yawa wins the first immunity idol as Levu and Soko are in a race to the finish. Soko wins the second immunity and is also safe from the tribal council as Levu is disappointed and set to go to tribal council as the 4th person will be voted out. Jessica says she wants to help the healers as much as she can with her secret advantage.

Back at the Levu camp, Devon feels everyone was working at their own pace instead of as a team. Alan says there is no question that Devon is the swing vote and whoever he goes with will be on top. Devon goes to talk to Ashley about voting him out; she denies it and he calls Joe sketchy. Devon feels he can trust Ash and Alan, he thinks Joe is a snake and doesn’t like having snakes around; Ashley is mad at Joe.

Desi reveals to Joe that she saw Devon and Ashley together. Joe feels he needs to use the idol tonight, but it could be a waste. Joe goes to talk to Devon, Ashley, and Alan, asking if they are going to move forward as a strong tribe or are they going to move forward fractured; Alan says there is nothing to acknowledge since someone is going home.

Alan asks him who he is going to vote out and they all begin to argue who is the weakest link; Alan says Joe just blew up his and Desi’s game and she’s devastated. Joe tells Desi not to worry as he has the idol and he needed to get the target off her back. She tells him if he plays the idol on her, she is by his side from here on out. He offers to give her the idol and she asks him for the name he wants her to write down.

Devon, Alan, and Ashley are not sure who has the idol but are sure Joe or Desi has one. Devon receives the secret advantage but has no idea what it is until tribal council. He feels he has all the power in his hand.

Alan says it’s been a long day and some people are just wanting tribal to get started; Joe jumps in and says he threw Ashley’s name into the pot. Ashley says she is not the weakest link in the tribe and suggests his words and actions may truly affect him tonight. Desi shares that she was thrown under the bus, Alan openly admits his vote is between her and Joe.

The tension is clear between Alan and Joe; Devon knows his vote is the swing vote and his vote is based on who he can work with and move forward within the game. The pressure is on for Devon who says he will stay consistent with whatever is best for him. Jeff announces it’s time to vote and Devon reveals he got something that he couldn’t open until now. Devon says it’s not an advantage because he is blocked from voting.

Joe begins the voting, Ashley, Desi and then Alan, Jeff goes to tally the votes. Joe stands up, revealing he has a hidden immunity idol, he hands it to Jeff and says he is keeping it for himself. Any votes cast for Joe will not count.

Votes are in – Joe – Joe – Alan and Alan; Alan is the 4th person voted out. The tribe has spoken and it’s time for him to go. Devon looks at Joe and tells him “Well done!” Desi thanks, Joe, who says he has her while he basks in the glory of Ashley’s devastation.

Jeff says one of the great truths about Survivor is you can have all the plans you want but the Survivor gods don’t care.