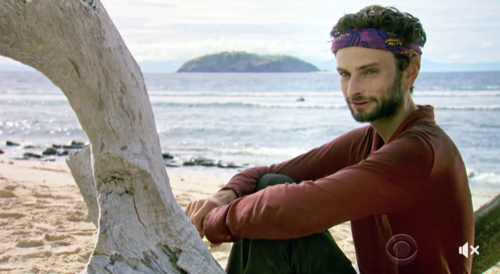 Tonight on CBS Survivor: Heroes vs Healers vs Hustlers airs with an all-new Wednesday, November 15, 2017, Season 35 Episode 8 and we have your Survivor recap below. On tonight’s Survivor season, 35 episode 8 called “Playing With the Devil,” as per the CBS synopsis, “One castaway finds a secret advantage with a special twist; concentration is key to an individual immunity challenge.”

As Survivor: Heroes, Healers, and Hustlers begins tonight; there are eleven (11) left, who will be voted out tonight?

It is Night 19 in merged Tribe Solewa. Joe says Jessica was completely blindsided by the Heroes and the Hustlers and as a fan of the show, it was an amazing play and have to appreciate it. Lauren and Ben made the plan and executed it. Ben is quite happy about that but worries about the individual part because any individual could mess everything up. Lauren was busy nailing things into the tree and discovered the tightly rolled scroll among the nails and hid it in her pocket, hoping no one saw what just happened.

It says, “Congratulations, you have found an advantage in the game. This advantage allows you to secretly not vote at the next tribal council and instead save your vote for use at a future tribal council. This is how it works – When it is your turn to vote, do not write down a name, instead, secretly place this note inside the voting urn and take the blank voting parchment back with you.”

Jeff greets the Tribe for their reward challenge. Today, they need to race up a tower, through a series of obstacles to the top, where they will use a slingshot to attempt to launch sandbags, hitting 5 targets. The first team to finish wins the reward. The winning team will be taken to a private island, where they will enjoy spaghetti, bread, salad and red wine, but there is a twist; they will randomly draw for teams. The odd person out, will not compete in the challenge but will win the lottery and automatically get the reward.

Team 1 (RED) is JP, Chrissy, Cole, Ryan, and Devon. Team 2 (BLUE) is Desi, Ashley, Ben, Mike, and Lauren. Joe drew the white rock and automatically gets the reward. It is 3 -2 for Red, everyone has fired the slingshot at least once so now anyone on the team can do it. Blue is in the lead with 4 now. Ashley gets it to 4 but JP gets the 5th one for the red team, so they are off for the reward and Joe is joining them.

Jeff informs them the reward is family style, they are to eat one at a time, and alone, so its up to them how much they eat and how much they leave for the next person and because it is in private, no one will ever know how much each has eaten; Devon doesn’t like that. One final twist is since Joe was the lottery winner, he will decide in what order, everyone will eat. He tells them to head out and enjoy their reward. Joe knows he has a target on his back and this gives him the opportunity to change that and make stronger alliances.

Joe feels Devon should go first because it is his birthday; he put himself last because he didn’t want an additional target on his back and right now the Hustlers are the ones with the power and he feels he has a decent relationship with Devon, and if he keeps developing their bond, it will benefit him in the long run. Devon felt pressure because he feels everyone is counting on him to set the bar on how much they are to eat. He thinks he might have eaten more than his fair share but when there is that much food, it is hard to stop.

JP goes second but hoped to be last because then he could have finished it off. He wants to make sure everyone gets their fair share; he felt he ate his portion and if they were pigs then it is on them. Cole arrives and feels Devon and JP ate far more than their fair share, but he doesn’t blame them as he is going to do the same thing. He knows he is on the bottom and is going to eat as much as he wants. He discovers there is writing on the bottom of the plate. It says there is a hidden immunity idol that is buried under their tribe flag. He hopes he is the first to this clue and tries to hide it by putting the remaining food on an apron.

Chrissy, an avid fan of the show, knows there is generally a clue to a reward like this, so she begins to search the table for clues. She also thinks she is the first one to find it but hopes that Ryan will also find the clue. Ryan enjoys the food, but was looking for the clue; when he finds it, he hides the plate in the woods. As Joe goes to finish off what is left for him, Ryan and Chrissy whisper about the clue they found; Cole asks what they are whispering about, but he knows what they are talking about. He says he has the bigger push and shove than they would for the idol.

They return from their reward dinner, saying it wasn’t really a feast. Ryan watches as Cole goes to pee and says this is the time he needs to strike, literally while he is caught with his pants down to dig up this idol. Ryan begins to dig and Chrissy comes over; Ryan tells her to cover it up as he has it. Cole comes running over and jumps on her digging where she is, she screams for help from Ben comes to her help. Ryan stands as the flag falls down all while the idol sits in his little pink shorts. Ben shouts that Cole has the idol as he saw him shove it down his pants; Cole denies it. Ben says he dug his own grave. Cole feels he is in big trouble now that everyone thinks he has it.

Tribe Solewa gathers for the Immunity Challenge on Day 21. Host Jeff Probst takes the Immunity necklace back from Desi and explains the rules to today’s challenge. They are to stand on a narrow beam while balancing a statue with a very long pole. At regular intervals, they will move further away from the statue making it more difficult, at any point the statue falls of they slip off the beam, they are out; the last person standing wins Immunity and is safe at the vote. Losers head to Tribal Council where the 8th person will be voted out of the game.

Mike drops his statue, and takes his spot on the bench; Joe drops right after him and we are down to 9. Devon falls off the beam and is out. Lauren is out and we are down to 7, but right after her is Ryan. Five minutes to go in this round and they move further back. Ashley lasts only a couple of seconds in the second section; Ben begins to wobble, but manages to recover; JP is back solid too. Chrissy, out of nowhere drops. We are down to Ben, Desi, Cole, and JP.

Ben drops and we are down to 3. Desi looks solid, without any expression, same with Cole but JP’s feet are moving. Desi’s statue falls and doesn’t keep her streak alive and we are down to JP and Cole. JP is out and Cole wins individual immunity and cannot be voted out at tonight’s tribal council; no one is happy.

Back at camp, people do congratulate Cole for winning while he feels it was the “bomb” as he came out on top. He was bummed out, thinking he was leaving tonight, but firmly believes the Heroes are a sinking ship and if they don’t do something soon, they are going to be in a bad place. Ben suggests all the girls vote for Joe and all the guys vote for Desi. Cole informs Joe and Mike that he does not have an idol, but Joe thinks it is a matter of who can sway the Hustlers as there are 4 Heroes and 4 Healers still.

Joe talks to Ryan and Devon, saying they shouldn’t be listening to Ben, as they will not beat him in the end; Ben is listening to this conversation from the brush. Ryan says it is true, and he doesn’t want to take Ben to the final 3, but voting against Ben is betraying Chrissy, so now isn’t the right time to do so. Ben reiterated how much he doesn’t like Joe. He confronts Joe and says he doesn’t swear on the Marine Corps to anyone; Joe says privately he is just saying anything to get Ben to blow up his game. Desi hopes Joe knows what he is doing because there is a definite target on her back and this could turn out very badly for her.

Lauren reveals to Ben about the secret advantage because, with it, they can’t do the split vote. She is solid with Ben, but she is playing for her and her daughter, so this is a huge decision and now Ben is concerned that Joe has another idol and feels he needs a Healer and goes to talk to Mike. Mike talks to Cole, worrying they are lying to him again, saying Joe goes home this week, Cole is next and then Mike is after him.

Tribal Council begins and everyone gets emotional over Joe; Ashley says they don’t know if he is really good at the game or just super annoying. Mike says coming back from last tribal council, you feel like you have been lied to and don’t know who you can trust. Ben says he tries to stay cool, and apologizes to Joe for letting him get that angry. Desi calls out people on their lies. The voting begins.

Jeff reads out the votes again. Desi – Joe – Desi – Desi – Desi -Desi. Desi is the 8th person voted out and the 1st person of the Jury! As Desi leaves, Joe promises her, he didn’t flip on her.